Then the billboard reads, "The Texas Miracle Died in Uvalde, Don't move to Texas," as citizens flee the Golden State in droves for Texas. 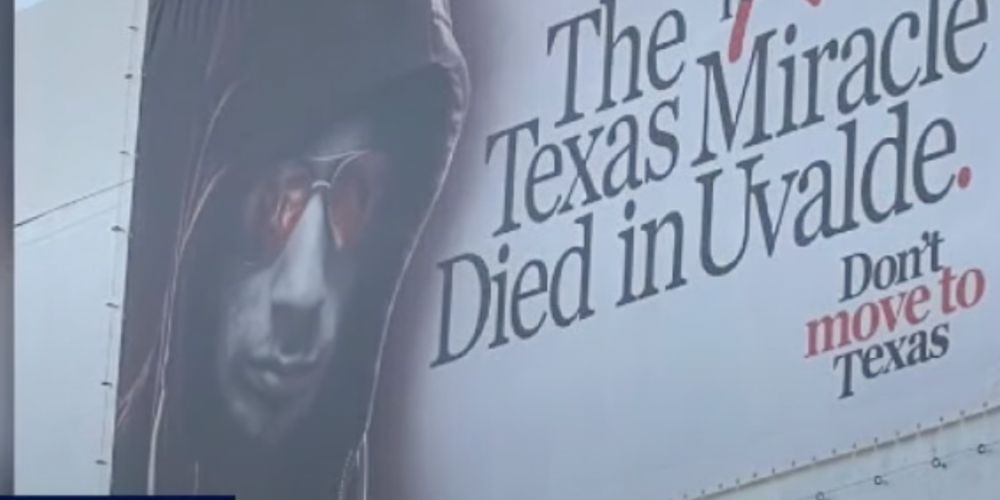 The billboard features a man shrouded in a hoodie and sunglasses with an "X" marked over the phrase "Don't mess with Texas." Then the billboard reads, "The Texas Miracle Died in Uvalde, Don't move to Texas."

The San Francisco billboard is operated by FoxPointMedia but it's unclear who has put the billboards up, according to the New York Post.

The message appears as Californians have been relocating to Texas in record numbers. As the Post reports, about one in 10 Texas transplants have relocated from the Golden State. California's population decline in recent years caused it to lose a House seat while Texas added two seats.

After the BLM riots of 2020, many California cities under Democratic leadership embraced strategies of defunding the police, lax punitive measures for criminals, and strict Covid lockdowns and mask mandates. The combined effect caused many more Californians to flee the state.

A recent study by the Institute of Governmental Studies at the University of California Berkeley found that the downtown portions of cities such as San Francisco have become ghost towns. Similarly, data released by the real estate firm Redfin in July showed that homeowners want to flee Democrat led cities and move to safer, more affordable locations, most of which are in Republican led cities and states, such as Texas and Florida.

The signs mentioned the slaughter at Robb Elementary School which saw Gunman Salvador Ramos enter at 11:33 am on May 24 and fatally shoot 19 children and two teachers. Despite 400 authorities on the scene it took over an hour to terminate Ramos.

Governor Rick Perry used the phrase the "Texas Miracle" to describe the state's strong rebound to the Great Recession. "Don't mess with Texas" has become a catch-all for Texan pride but originated as an anti-littering campaign from the 1980's.

The Post cited several Reddit threads for theories on who put the billboard up. "Is Texas buying billboards to deter Californian expatriates from turning their state blue?" noted one user, with some consensus on the site, such as "Quite frankly this would make the most sense out of anything."

Redditors also remarked the sign was "the most disgusting use of political propaganda, using the tragedy to their advantage" and "It’s honestly kinda offensive to the people who lost their children in Uvalde."