Chicago Mayor Lori Lightfoot used local police to prevent BlazeTV host Elijah Schaffer and freelance reporter Kalen D'Almeida from filming on a public street outside the mayor's house and capturing a controversial story about her. 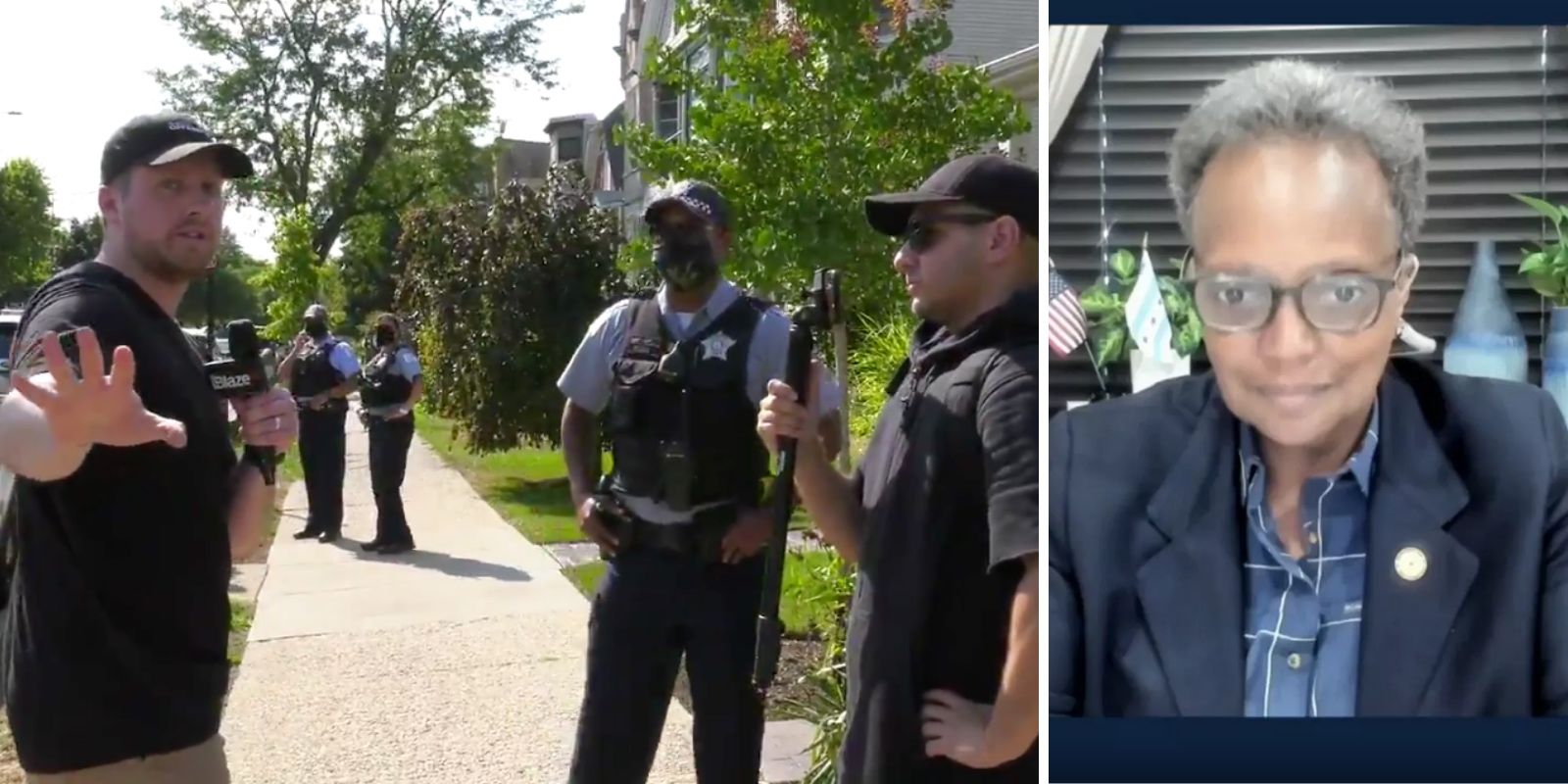 Chicago Mayor Lori Lightfoot used local police to prevent BlazeTV host Elijah Schaffer and freelance reporter Kalen D'Almeida from filming on a public street outside the mayor's house and capturing a controversial story about her.

When an officer approached the two journalists today, they clarified that they were simply providing stand-up commentary on the recent policy banning protesters explicitly on the block where Lightfoot lives.

The pair retorted, raising their First Amendment rights as members of the free press. They chose to start rolling anyways, reaffirming that they're knowledgeable of the laws in the country and constitutional freedoms.

"It is interesting that protests are not exempted from other places or businesses that have seen looting and rioting over the last couple weeks and months," Schaffer prefaced the tape before he was interrupted by the initial cop who returned after calling for backup.

"What's your whole purpose for being here?" the now-masked officer asked again.

Schaffer stated that their two-person crew was not protesting the policy change nor live streaming to the network. To avoid violating any privacy laws, he went on to explain that no addresses, street names, or identifying information was visible on camera.

The officer reacted by blocking off the pathway to Lightfoot's house.

"I clarified to him that I had no bad intentions and asked him what laws we were breaking," Schaffer provided a voiceover replay of the events.

When Schaffer questioned the officer further, the cop emphasized that law enforcement stood guard as "security for the house."

"The closer you get to the house, it feels like a threat," the officer responded.

Schaffer rhetorically asked his viewers how the two reporters were posing a threat by remaining respectful and even offering the police officer to inspect their personal belongings to ensure no weapons on hand.

"We clarified why we were there, but yet us trying to tell a story is somehow putting the mayor's house in danger. What is happening to journalism in 2020?" Schaffer speculated.

"The fact that we stated our position—we're with a national network [and] we're here reporting—how does the press being at a place with a politician impose any sort of threat that a police officer would need to get involved?" Schaffer turned to the police officer and reasoned on.

The cop noted that as security, he identifies "anything that's out of the norm."

"But is the press not the norm out here?" Schaffer volleyed, referring to the race riots that have gripped the city and pointing out that Lightfoot's policy update has made national news.

The officer admitted that journalists seldom appear on a daily basis, citing that when members of the media do arrive, they keep their distance from the house.

"For a mayor that sides with Black Lives Matter, an organisation that wants to defund the police, I just find it funny to use the Chicago police as her private security to not only kick out protesters but to kick out the press from actually trying to tell the true story of her hypocrisy and the hypocrisy in general of leaders that are failing our large cities," Schaffer signed off.

"My views today are that the state of political affairs in Chicago is alarming. The fact that Mayor Lori Lightfoot would use—and I would say abuse—the Chicago Police and the taxpayer-funded property to bar the freedom of speech, a constitutional right of me, a citizen of the United States as well as a member of the free press, to prevent us from reporting on a controversial story outside of her building, this is alarming."

He went on to acknowledge that he has the privilege of working with a major network.

"But imagine if I didn't have the ability to realize that every free individual with a cell phone or a pen or whatever device they were recording on is actually the press," Schaffer proposed the hypothetical.

"We have a people's press in this country and we can expose people especially for the lies and the hypocrisy like the mayor of Chicago Lori Lightfoot held when she used the police to exempt her neighborhood, specifically her block, from protests while allowing the rest of Chicago to burn and be looted," Schaffer called out Lightfoot, urging for an end to her two-faced actions.

Lightfoot had already allegedly harbored a security detail from the Chicago Police Department due to previous perceived threats posed to her safety by protestors, D'Almeida wrote to The Post Millennial.

The mayor advocates for defunding the police department, but also, she wants special protections for herself with taxpayer money, D'Almeida slammed Lightfoot.

"As far as what this means for free press in the country, I think it sets a dangerous precedent for the free exchange of information, reporting, and journalism in the future. She cannot justifiably bar us from our constitutional rights. Law enforcement must protect the constitutional rights of the citizens and oppose hypocrisy of elitist government officials."