Despite the development of this system during puberty being necessary for survival instincts, McClain simply stated "So for blocking hormones, does that mean we're delaying that process? Maybe." 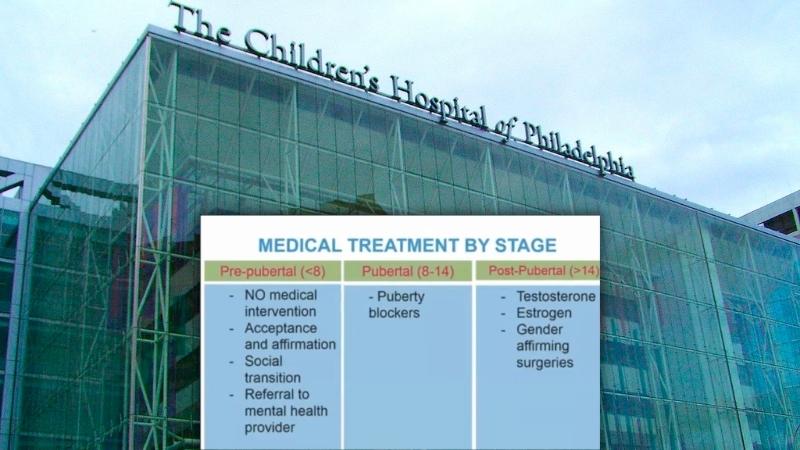 Olivia Rondeau
Sep 24, 2022 minute read
ADVERTISEMENT
ADVERTISEMENT
Disturbing clips from a virtual meeting led by Dr. Zachary McClain of the Children's Hospital of Philadelphia were shared on Twitter Friday, showing the pediatric medicine specialist talk about prescribing puberty blockers to children as young as eight years old and doing sex reassignment surgeries starting at around 14. Possibly even more frighteningly, McClain went on to say that "we're just not sure" if the puberty blockers he prescribes are hindering cognitive development.

The online meeting recordings were shared by the child indoctrination watchdog page "Inside The Classroom." Along with a corresponding chart stamped with the hospital's logo, McClain detailed the types of treatment necessary for children who don't identify with their biological sex.

"Medical intervention for youth can be broken down into these stages. So, the first one on the far left-hand side is prepubertal, which I put here as less than eight [years old] on average… At this point, no medical intervention is needed," McClain began, before going on to say that all a kid should need before turning eight is simple "affirmation" of their "gender identity."

"What is indicated is really acceptance and affirmation. This really can include things such as choosing a name, haircut and clothing style that affirms their gender identity."

"So that brings us to our second block which is pubertal or eight to 14 years old," McClain continued. "...here, we'll think about puberty blockers. So the eligibility to start [hormone] suppression is that they must have been diagnosed with gender dysphoria and have started puberty."

"Puberty blockers delay further pubertal changes, or secondary sex characteristics in order to buy more time for the family and child to explore gender identity and feelings," McClain explained to the listeners. "Post pubertal, and I have the age greater than 14 here, but it can really vary around 14 — this refers to cross sex hormones. So this is when we think through starting testosterone and trans-male estrogen and trans-female and gender affirming surgeries."

As for how puberty blockers impact youth brain development, McClain prescribes them without knowing the potentially harmful costs.

"The other concept that's even harder to describe is just being on blockers causing the stalling of cognitive development," the doctor said, in another clip shared by Inside The Classroom.

In his presentation, McClain acknowledged that the hormones blocked by the puberty-stunting treatment are the ones that foster the growth of the limbic brain system.

According to the Queensland Brain Institute, the limbic system is "the part of the brain involved in our behavioral and emotional responses, especially when it comes to behaviors we need for survival: feeding, reproduction and caring for our young, and fight or flight responses."

Despite the development of this system during puberty being vital for growing natural survival instincts, McClain simply stated "So for blocking hormones, does that mean work delaying that process? Maybe."

"There's this abstract cognitive development that we're just not sure about," he continued, adding that when he speaks to his patients' families about this, he is "really straightforward about that some of the science is there, and some of the sciences isn't there. But we know in general, these are safe."
ADVERTISEMENT
ADVERTISEMENT
philly childrens