"If folks are at the very beginning of this process, if they're just starting to think about gender, if you have an 8-year-old who's sort of beginning to express these give us a call." 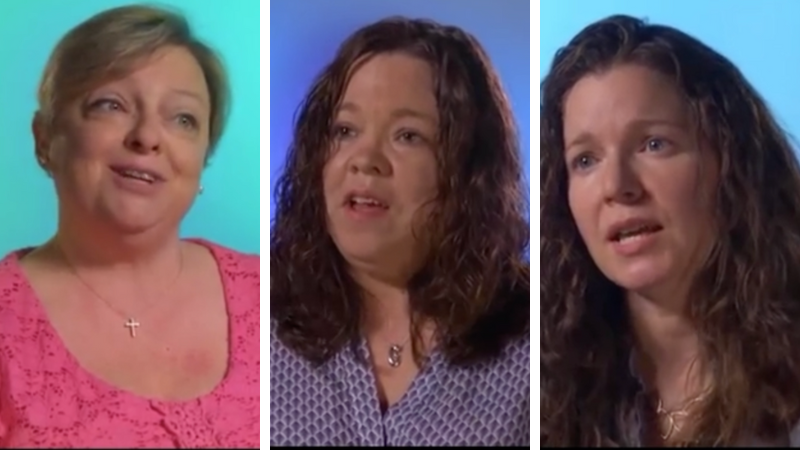 Hospitals across the country have created gender clinics to facilitate gender transition for both minors and adults. While many have been exposed, many more are operating the same kinds of clinics, giving children puberty blockers to stunt their natural development, and pushing harmful cross-sex hormones and surgeries on minors.

One of these is Golisano Children's Hospital in Rochester, New York, which offers a promotional video for gender transition, featuring a mother who transitioned her child, as well as providers who claim that trans children know they are in the wrong body for "their whole lives."

The hospital notes that it "has services available to aid families, youth, and young adults who identify as transgender, gender fluid, or have other questions or concerns about their gender." The hospital site states that "Children are first aware of their own gender at around age 2, and transgender children may insist that they are of the opposite gender and desire toys and clothing that are typically assigned to the opposite gender." 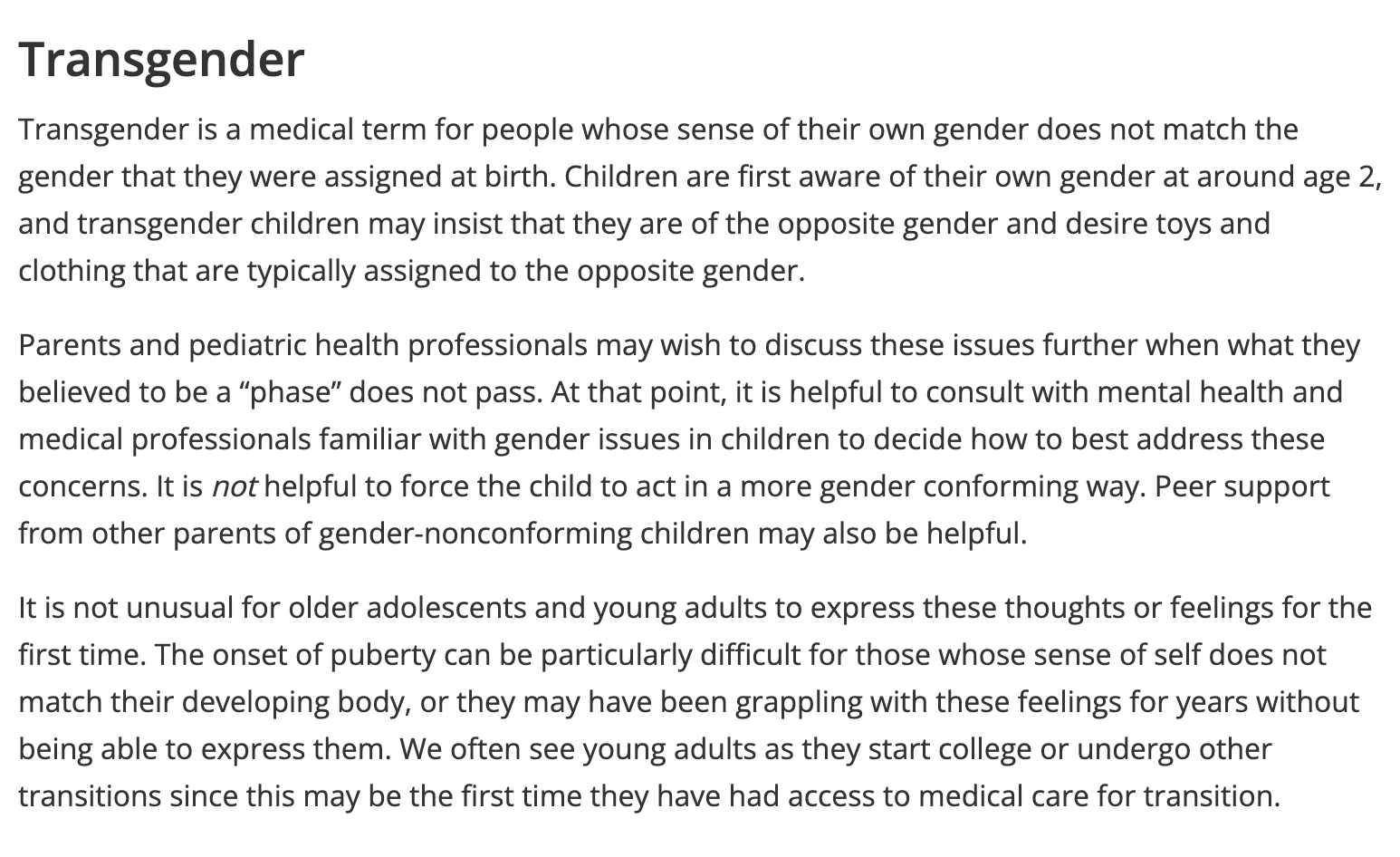 Golisano admits that normal life transitions, such as puberty, or leaving home for college, can trigger feelings of "dysphoria" and not belonging, but instead of noting that it is perfectly normal to feel anxious and confused around transitions, they say it's perfectly normal to feel suddenly like your body is not your own and you need drugs and surgeries to ease your anxiety at growing up.

"It is not unusual for older adolescents and young adults to express these thoughts or feelings for the first time," the hospital notes. "The onset of puberty can be particularly difficult for those whose sense of self does not match their developing body, or they may have been grappling with these feelings for years without being able to express them. We often see young adults as they start college or undergo other transitions since this may be the first time they have had access to medical care for transition."

The video encourgages parents to transition their children as early as 8-years-old, though the video has recently been made private on their site.

Adams is no longer a lay pastor at Open Arms, but Facebook posts show that Adams was the pastor there in 2018, where she delivered sermons about her experiences with coming out. She is now at the United Congregational Church of Rochester, where her bio states that she has had a lifelong interest in LGBTQ+ issues.

"While a sophomore at Mississippi State University," her bio reads, "and working as an intern for the Women and Gender Studies department, she helped design and implement the school’s first Gay Straight Alliance to combat the increased risk of vandalism of their dorm rooms, assaults and discrimination that LGBT folks were experiencing at the time on campus. This began her lifelong interest in issues of equality and non-discrimination."

Dr. Katherine Greenberg jumps in on the promotional video to explain "gender dysphoria," saying that it "is the experience that people have where the sex they were assigned at birth, their sort of biological sex is different from their sense of self or their gender identity." She is also a professor who instructs medical students how to hide information on adolescent health from their parents. Greenberg has also spoken out against Florida's Parental Rights in Education bill.

Greenberg, who lists her pronouns as "she/her/hers" is listed in the video as the director of gender health services at Golisano. Her specialties are in "adolescent reproductive health" and she "directs the GCH program serving transgender and gender diverse youth." She is also the "Vice Chair for Inclusive Culture in the Department of Pediatrics, and interim Associate Dean for Equity and Inclusion in the School of Medicine and Dentistry."

Her primary areas of research are "adolescent sexual and reproductive health, supporting transgender and gender diverse youth, and inclusive climate in academic medicine."

"Gender is not a choice," says clinical psychologist Emma Forbes-Jones. "We know from years and years of research that your gender identity is set by the age of about five." Forbes-Jones has also conducted research into the behavioral problems of "inner-city children with asthma," which found that there is "a clear need for an early biopsychosocial approach to care for vulnerable children with asthma."

Forbes-Jones has a practice with the goal of "help[ing] children, adolescents and adults utilize their strengths to become more competent and confident, and to support parents and family members as they, in turn, support their gender expansive loved one." She is a member of the World Professional Association for Transgender Health, which offers guidance that there should be no age limits on medical gender transition for youth, that "eunuch" is a gender identity, and that children as young as 2-years-old know their true gender.

Adams affirms the doctors' assertions, saying "my son B is 18. He came to his true identity very early at first. I remember him telling me that he wasn't Supergirl, he was Superman— when he was two." This is offered as definitive proof that her child was always truly male on the inside.

A provider jumps in to explain that trans children have know for "their whole life" that they were born in the wrong body, "they just may not have been able to express it."

It's then in the promotional video that the pitch is made to partake of the services Golisano has to offer, with the words "Help is available" flashing across the screen.

"Gender Health Services is a program through the Division of Adolescent Medicine," said Greenberg. "I'm the chief adolescent medicine doctor who sees patients with any gender concerns. And we are linked with endocrinology, both adult and pediatric with mental health services in terms of psychology and therapy, with psychiatry, and we have a host of other medical treatments depending on what people need."

Those "treatments" include cross-gender hormones, stopping natural puberty, mental health, surgeries, fertility services, and social work. Fertility services are necessary in a gender clinic, because the drugs and surgeries will likely result in sterility, meaning that a teen will have to freeze their eggs or sperm in order to eventually attempt IVF either in a partner or a surrogate before being able to have children of their own. 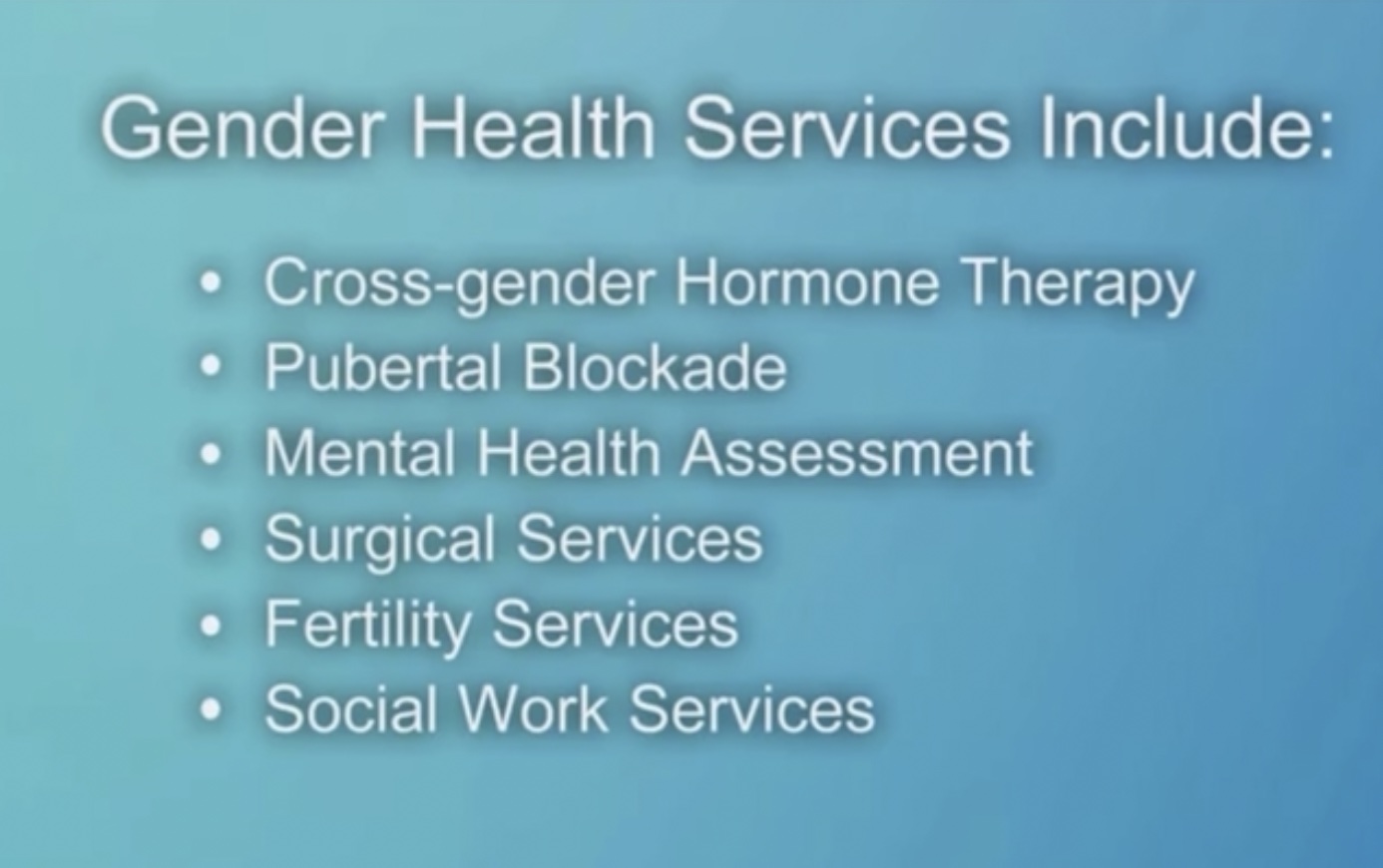 "When I work with a child who's gender expansive," remarks Forbes-Jones, "it really depends where they are when they come to me. And the key here is using a gender affirmative type of therapy."

"We follow what's called the WPATH model," says Greenberg, "which is the World Professional Association for Transgender Health. And it's an international standard of care that includes a mental health provider with a hormone prescribing physician."

The video goes back to Adams talking about the personal experiences of their family, and how they socially facilitated the child's gender transition, with the help of Golisano. "The very first thing," Adams said, "that we did was talk to him about what do we do now."

"We spent a lot of time getting a pretty thorough history of gendered behaviors and expression," said Forbes-Jones.

"A supportive family is really important in the adjustment of children who are gender expansive," said Forbes-Jones.

For Adams, seeing her child in "dude pants," strutting around in their new fashion hauls from a consignment store, made it all worth it.

"We went to a consignment store," Adams said, "we bought a couple of pairs of dude pants, and he strutted around in them until they just about fell off of him. So just anything you can do that says to your kid, that I love you and who you are is okay with me, I think is life affirming for them. Without a doubt, the most important thing you should know as a parent is you are not alone."

"We're here and we have a lot available," said Greenberg. "And if folks are at the very beginning of this process, if they're just starting to think about gender, if you have an 8-year-old who's sort of beginning to express these give us a call."

"There's been a big change in my son since he has come to be himself," said Adams.

Dr. Erica A. Bostick is focused "specifically in the fields of transgender medicine, reproductive healthcare, and eating disorders. Given her adult medicine training, Dr. Bostick also provides the aforementioned care to those patients transitioning into adulthood."

Dr. Cheryl M. Kodjo is focused on "Working to increase the number of minority pediatric residents pursuing careers in academia" and "developing and implementing curricular elements related to cultural competence that are integrated into all levels of medical education at the University of Rochester."

Dr. Jamie E. Mehringer "co-founded Vermont's first clinic dedicated to providing gender affirming care for transgender youth" and "has worked for many years to advocate and improve health services for LGBTQ youth." He conducted research into "the impact of chest dysphoria and masculinizing reconstructive chest surgery in transmasculine youth" and states that he "is passionate about serving youth from marginalized communities, transgender health, sexual/reproductive health and justice, fighting to eliminate health inequities, and dismantling systemic oppression."

Amy B. Realbuto is a nurse practitioner who is accepting new patients, and appears to work primarily on eating disorders, while being part of the gender clinic. Heather L. Wensley, also a nurse practitioner, looks to "psychological, spiritual, cultural, and emotional considerations that contextualize experiences of illness or injury" when treating adolescents. These are only some of those who are working in the gender health clinic at Golisano Children's Hospital.

Golisano Children's Hospital lists these as people as members of the Board of Directors. None of them list an interest in the medicalized gender transition of minors in their bios on the site, though many speak about the importance of the children's hospital in caring for children that are ill with cancer or other diseases, and the heartbreak at having lost a child too soon. It is unclear if they are even aware of the harms to children being done in the name of "affirmative care" at the hospital to which they dedicate their time and fundraising efforts.