"The pathology is not being trans; the pathology is the transphobia that the kids and their families are winding through the world with,” said Kerry McDonald, a therapist with a private practice in California. "So we're there as a mental health support if that causes really normal stress." 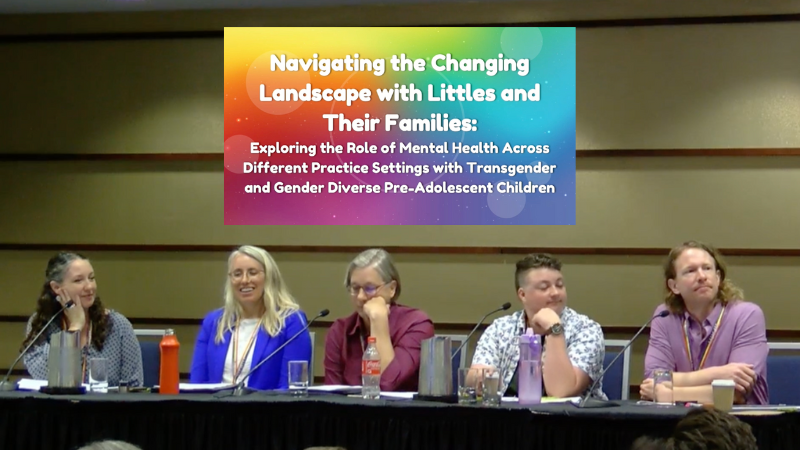 Mia Ashton Montreal QC
Sep 19, 2022 minute read
ADVERTISEMENT
ADVERTISEMENT
A consultation team of Minnesota mental health professionals that treat pre-pubescent children who have been led to believe they are transgender got together on the first full day of sessions at the 2022 WPATH conference, to discuss their experiences helping these children on their "gender journey." Dr. Rachel Levine was the keynote speaker at the conference.

In a session called "Navigating The Changing Landscape With Littles And Their Families: Exploring The Role Of Mental Health Across Different Practice Settings With Transgender And Gender Diverse Pre-Adolescent Children," they discussed the various therapeutic approaches to dealing with these children, whom they refer to as “the littles”. These "littles" are often as young as three years old. Many of them, they said, are perfectly fine and don't need mental health treatment before being socially and medically transitioned.

“The field of gender care developed first with adults, then kind of added adolescents, and is really just beginning to understand the developmental intricacies related to children,” said a psychologist at Minnesota’s Institute for Sexual and Gender Health at the beginning of the talk.

The general consensus among these experts was that the children who have been told they are members of the opposite sex don’t always need mental health support; that if the child is doing well, has supportive parents, and is generally happy, therapy is not necessary and social and medical transition can simply go ahead.

“The pathology is not being trans; the pathology is the transphobia that the kids and their families are winding through the world with,” said a therapist with a private practice in California. “So we’re there as a mental health support if that causes really normal stress."

One topic of discussion was the role of therapists in discussing medical intervention with the families of these children.

The Minnesota psychologist told of two common situations that she sees in her office. The first is parents of children who are still years away from puberty saying things like "when you’re older, you’re going to go on blockers and then hormones", as if it’s a foregone conclusion. She was clear that these parents are doing it out of love and support, but that they are influenced by society into thinking this way.

The second situation is children who are early bloomers, who have already started on blockers, but are “in so many ways … still developmentally children.”

That would be because they are literally children.

“It’s not uncommon when I talk to these children and their parents about what they know about the risks and benefits of puberty suppression …it becomes clear that the important discussions either didn’t happen at all or the knowledge just didn’t stick,” the Minnesota psychologist went on.

Perhaps that is because the average nine-year-old doesn’t have the mental capacity to grasp the complexities of the human endocrine system, nor the implications of an experimental treatment protocol that leads to sterility and a whole host of serious health risks.

The Minnesota psychologist thinks that therapists are in a unique position to help children understand puberty suppression given that they have more time with their patients and more of a relationship.

She says she always jokes with “her little kids” saying “you know what, I think you’re going to be a pediatric endocrinologist when you get older because you really know a lot of cool stuff.”

This was met with laughter from the audience because clearly to this crowd, the thought of small children grappling with the intricacies of their endocrine system and their future infertility is highly amusing.

“I also think that since we are sitting on the floor, playing with kids that ultimately trust us because we’ve talked to them about their video games … they trust me to talk about things,” added the California therapist. “They need to be able to trust someone to talk about genitalia and to talk about fertility issues in the future.”

“I feel like I say all the time ‘I’m not a doctor, but here’s what I kind of know.’” said an outpatient therapist in Minnesota. This person claims to be white, nonbinary and transmasculine.

“A lot of families I see are still on the waitlist to get into the gender clinic … so they don’t know anything yet.” The nonbinary and transmasculine therapist from Minnesota then went on to recount a story from “the other day” in which the nonbinary and transmasculine therapist told a mom: “you could try blockers; you could kind of hit the pause button while your kid thinks about it.”

The mother apparently replied: “you can do what? OMG. Perfect!” So-called puberty blockers, which were developed for the treatment of prostate cancer, have been used to treat precocious puberty. However, the drug maker Lupron does not recommend treatment for that purpose for more than 3 months, and has not recommended the drug to treat gender dysphoria.

The US Food and Drug Association has issued warnings for the use of Lupron, and other puberty blockers, after having found that the drugs contribute to bone loss, result in brain swelling, and even blindness. These conditions are not reversible and do not come back after the desired pubertal pause. The drugs also cause sterility.

The California therapist had a great tip for families struggling with getting their child’s pronouns right. “I encourage them to do a pronoun jar,” she explains. “Every time that somebody gets the pronoun wrong, they put a dollar in the jar, and then you can use the money at the end to buy a binder.”

A binder is a chest compression device that teenage girls who hate their developing breasts and believe that means they are boys will wear to flatten their chest. Binders have been shown to affect lung development and cause rib and spine abnormalities, amongst other negative health effects.

The main thing the California therapist gets from being in the consultation group is "a sense of comfort almost in knowing that nobody else, even the Dianne Berg…has it all figured out."

"In the world outside trans healthcare, it's hard to say 'I dont know' because it can get used against you, especially with little kids," she explains, seemingly oblivious to the numerous reasons why people might object to medical professionals dramatically altering the course of a child's life without having any idea whether it's the right thing to do.

"The world outside of this wonderful conference this weekend is hard on trans folks, hard on their parents, hard on kids that are trans, and hard on the parents," the California therapist went on.

The nonbinary and transmasculine therapist then interjects to say that while the conference is "a nice bubble of support, it doesn't feel safe all the time" to be a trans person at the event, given the way some of the topics are talked about by "cis people" which can "be kind of triggering."

"The biggest thing that we talk about in our gender clinic team is we are too cis and we are too white" added a man who works at Children's Minnesota, who then nobly stated that the moment someone who is not cis and loves the work as much as he does comes along, he'll "move right away."