In CNN’s feed the video can be seen shifting colors just before the 20 minute mark of Biden’s speech. 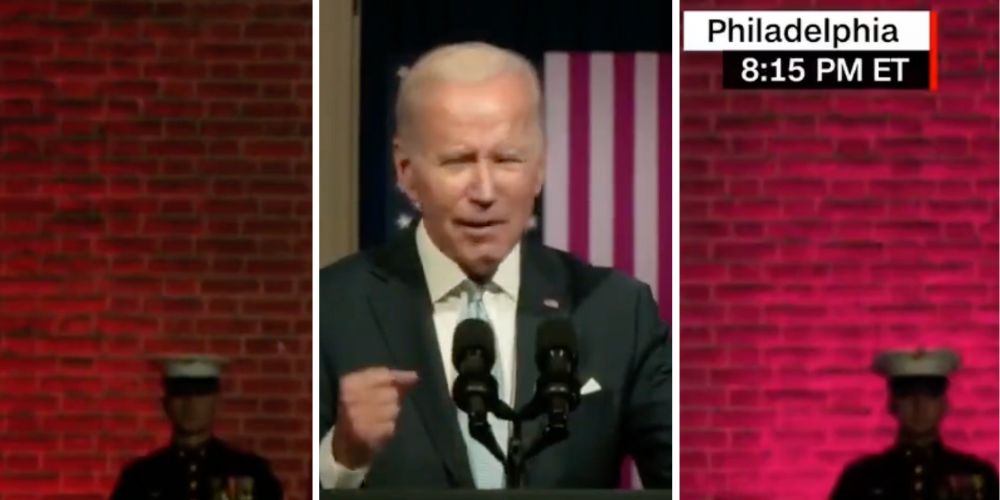 Amidst President Joe Biden’s speech on Thursday night regarding the "Soul of the Nation," in which he sent a majority of the speech declaring MAGA Republicans an enemy of the state, CNN was exposed changing the color of lights in the background from a harsher blood red color to a softer hot pink.

In a feed from the White House, Biden was seen standing in front of Independence Hall in Philadelphia, Pennsylvania, with the historic building bathed in red light.

In CNN’s feed, the video can be seen shifting colors just before the 20 minute mark of Biden’s speech, with Biden saying, "Democracy cannot survive when one side believes there are only two outcomes to an election. Either they win, or they were cheated, and that’s where the MAGA Republicans are today."

The remainder of CNN’s feed of the speech continued with the building being bathed in pink light, with Biden’s skin tone changing to a pinker hue as well.

CNN was called out for the action on social media, with Twitter users saying the move to shift the colors came as a way to make Biden’s speech come across as less harsh, even as he told the nation that MAGA Republicans represent the most extreme threat to the nation’s democracy.

During his primetime speech, Biden told the nation that "as I stand here tonight, equality and democracy are under assault."

"Donald Trump and the MAGA Republicans represent an extremism that threatens the very foundations of our Republic," he declared.

"MAGA Republicans have made their choice. They embrace anger. They thrive on chairs. They live not in the light of truth but in the shadow of lies," he said.