Conservative activist reveals that Disney has a MASSIVE pedophile problem

A lifeguard at Animal Kingdom Lodge was busted in a child predator sting wearing his Disney work clothes. 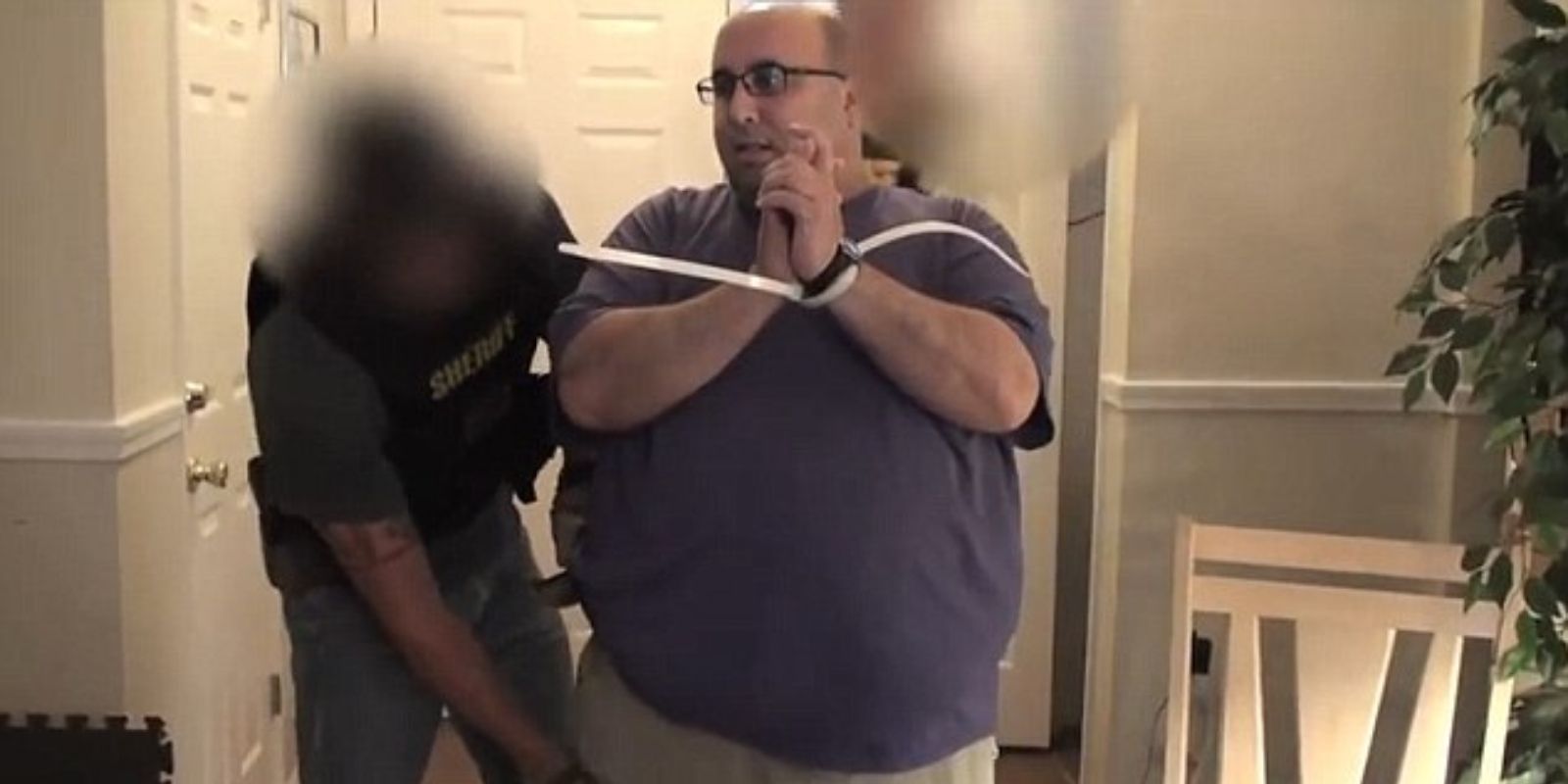 It's not a surprise to many supporting the bill that the children's entertainment giant has been a longtime employer of pedophiles and child predators embedded among its staff, according to numerous reports in previous years.

Investigative journalist and activist Christopher Rufo, whose reporting has exposed critical race theory teachings in K-12 schools and at the corporate level, highlighted some of "the child-predators of Walt Disney Co." in a series of expository tweets.

"Disney has presented itself as the moral voice for children, but the company has a dark side: a shocking number of its employees have been arrested for child sex crimes," Rufo tweeted Sunday, prefacing Monday's drop of revealing articles.

Disney worker Robert Kingsolver was arrested in a 2014 child sex sting for soliciting sex from undercover agents posing as a 14-year-old girl.

"I work for Disney so I love to see dads having fun with their daughters," Kingsolver, then 49-years-old, said in the chat with undercover law enforcement officers, according to CNN Investigations. "I really enjoy giving oral."

Kingsolver, charged with soliciting a child for sexual acts and traveling to meet a minor for unlawful sexual activity, was working as a service manager who oversaw ride repairs at the Magic Kingdom before he was placed on unpaid leave.

He thought he was meeting a young girl for sex at a house set up by detectives from the Lake County, Florida, Sheriff's Office, where Kingsolver was apprehended.

During an interview with CNN, he reminisced about seeing children and their families enjoying the rides at the park. "It was like going to a fun – some place you really enjoyed," Kingsolver said, adding later: "It was just, that was the best part, just seeing kids glow and seeing their heroes. I just enjoyed that so much."

At the time, Kingsolver was one of at least 35 Disney employees arrested since 2006 and accused of sex crimes involving children, trying to meet a minor for sex, or for possession of child pornography, CNN reported. A total of 32 were convicted at the time of CNN's investigative report, with the remaining cases pending. Two possession of child pornography cases occurred on Disney property, CNN said.

40-year-old Allen Treaster, a concierge at Animal Kingdom Lodge who used to work at Disney's popular Toy Story ride, also appeared in 2014 at a residence to meet a 14-year-old child, hoping to "fulfill a fantasy," according to text messages obtained by police. Detectives arrested Treaster after he engaged in an explicit chat with an undercover officer he believed was the underage boy, Daily Mail reported.

"He admitted to chatting about performing oral sex on the 'boy.' Treaster said that it has always been a fantasy of his to have sex with a 14 year old boy," police said.

Treaster advertised himself online as "Big Teddy Bear for younger chaser," per CNN, and during the videotaped interrogation with detectives, he confessed to having sex with a 15-year-old boy he groomed online weeks before the arrest. Treaster said he drove to Georgia to pick the minor up at his house and then took the teenager to a hotel where the two had sex, according to CNN's report.

Disney character actor Patrick Holgerson was taken into police custody in 2014 during sex sting Operation Be Mine when undercover detectives posed as children in online chat forums and arrangements were made to meet at a vacant home in Clermont for what the suspects believed would result in sex with minors.

The 32-year-old man faced several charges including failing to disclose HIV status to a sexual partner, WESH-TV reported. Holgerson sent nude photos and engaged in explicit sexual chats online with someone he thought was a 13-year-old boy, according to police records. When he was arrested, Holgerson ran from police.

During a videotaped interview with sheriff's detectives after the arrest, Holgerson said he was in training to become a VIP tour guide. "I work with kids," Holgerson told the interrogating detectives, according to CNN. "I love kids and not in a bad way. I just have a strong connection with kids. I like working with kids."

"I just enjoy helping them grow and that's why I've been working with high schools for so long is because a lot of these kids look up to me," Holgerson said.

In 2020, roommates 32-year-old Justin Hazan, an operator on the Millennium Falcon ride, and 36-year-old Arlandres Sims, a food runner at the Animal Kingdom Resort, were busted during Operation Guardians of Innocence V.

According to a news release, detectives found a computer that was advertising videos containing child pornography at the pair's residence.

Hazan admitted to downloading and possessing child pornography, resulting in 15 counts. During an initial preview of Hazan's computer equipment, detectives located files depicting child pornography with victims as young as four- to five-years-old, ClickOrlando.com reported. Sims was charged with 25 counts of possession of child pornography. Both were placed on unpaid leave.

Disney Cruise Line youth host Oliver Lovatt was arrested in 2019 and charged with two counts of lewd and lascivious battery on children under the age of 12 for molesting a 10-year-old boy aboard the Disney Magic ship's "Oceaneer Kids Lab."

While out at sea, Lovatt blindfolded and spun the child around several times as part of a game, according to CBS 12, when he "fondled the victim's penis outside of the clothing." The boy said Lovatt sat next to him while he was building a house of cards, and as the 25-year-old Disney employee moved "his hands towards him," the boy covered his genitals out of fear he would be fondled again.

The incident was captured on surveillance cameras and Lovatt "confessed to fondling the boy," CBS 12 reported. However, the felony charges were later dropped against the molestation suspect when the boy's parents, who live outside of Florida, did not want the child to testify in court, Miami Herald reported.

In 2012, an 11-year-old girl was groped and kissed by a Disney dining server in an elevator on the Disney Dream prior to departure while passengers were still boarding, but the perpetrator was able to evade arrest due to bureaucratic negligence, even though the attack was caught on surveillance footage.

About two hours later, the cruise ship left the port with the underage victim and the child molestation suspect, 33-year-old Milton Braganza, still on board.

An ex-Disney Cruise Line security officer claimed she was told by Disney officials: "Just keep your mouth shut." The former employee, a veteran cop, said: "I was ordered not to make any phone calls, do anything at all. Nothing. Period."

It was not until the next day, after the ship had left US waters, that Disney Cruise Line notified Port Canaveral police, the FBI, and the US Coast Guard. At the time, none of those entities indicated any desire to investigate the matter, ClickOrlando.com reported. The company also alerted the Royal Bahamas Police Force, which took over the probe because the Disney Dream is flagged there.

When the ship arrived in Nassau almost two days after the incident, Braganza admitted to Bahamas Police: "I touched her on her right breast with my left hand."

Braganza was later taken to an airport, where Disney arranged and paid for his flight home to India, per standard contract provision for the company to cover tranportation costs of employees returning to their places of origin.

McGrew, 34, was charged with four felony counts while his 29-year-old girlfriend, Lawrence, was hit with two felony charges after the soliciting couple took an Uber to the law enforcement set-up location in August 2021, police said.

Animal Kingdom Lodge lifeguard Kenneth Aquino, 26, allegedly left his girlfriend who was seven-months pregnant with his child to have sex with a 13-year-old girl,

Judd said child predators choose Disney as a place of employment because it's a honeypot, a trove of children. "Wherever you find children, you'll find sexual predators," Judd said. Most staffers "work at Disney because they want a good, stable job for a great company, but there is always a few that are there because they can see children. They can live in a child's world," Judd explained.

The dark shadow cast over "The Most Magical Place On Earth" haunts Disney as recent as a mid-March child predator sting that caught several Disney employees just days after the corporation opposed Florida's anti-grooming legislation.

Many detractors have lambasted Disney for railing against a law that shields children from the type of predatory behavior its ranks are perpetrating.