Gender identity, or that "vibe," or "internal feeling" of being a woman has now linguistically and definitionally been conflated with biological sex. 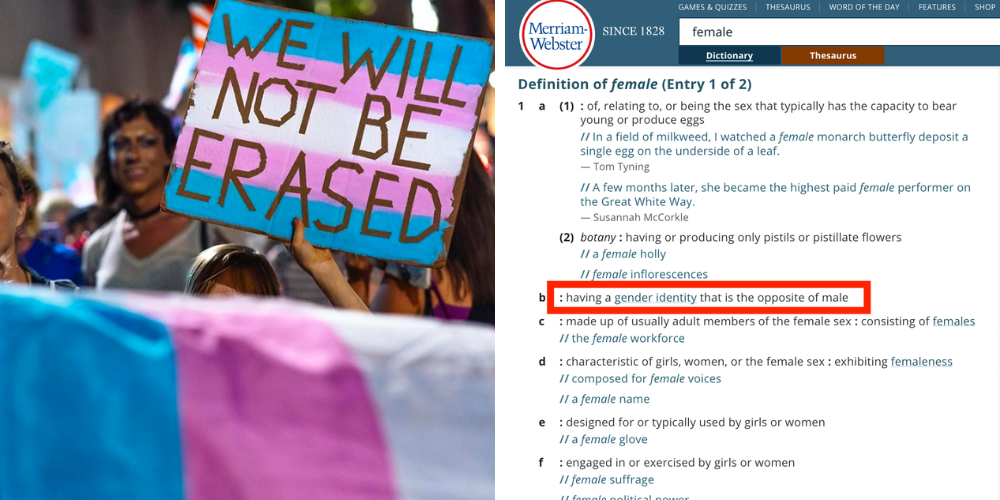 The dictionary definition of "female" has been changed by Merriam Webster to appease trans activists. Once defined as "adult human female," the term now has a lengthy definition, including "having a gender identity that is the opposite of male." Gender identity, or that "vibe," or "internal feeling" of being a woman has now linguistically and definitionally been conflated with biological sex.

The two concepts, gender identity and biological sex, could not be more different, as the former refers to someone's feelings of how they associate based on gender stereotypes, and the latter is a designation concerning reproduction. But for Merriam Webster's Dictionary, the time has come to include males in the definition of females.

Matt Walsh, who recently premiered the documentary "What is a Woman?," noted the change on Twitter, saying that the definition was changed to "appease the trans activists."

Activists who purport that biological sex and gender identity are basically the same thing, despite one being a physical condition and the other being entirely emotional in nature, have pressed for a change in language to reflect that anyone, including males, can be female if only they imagine it is so and get everyone else to believe them.

Congress under the Biden administration has altered documents to eliminate the word "mother" and replace it with "birthing parent" in another effort to eliminate women from their biological sex.

The intent of the changes is so that the rule "honors all gender identities." The document penned by the 116th Congressional rules committee states that "Changes pronouns and familial relationships in the House rules to be gender neutral or removes references to gender, as appropriate, to ensure we are inclusive of all Members, Delegates, Resident Commissioners and their families - including those who are nonbinary."

This has resulted in confusion in law, educational policy, and most notably, athletics. The Biden administration has adjusted Title IX, which ensure fair funding for men's and women's athletics, to allow for gender identity protections instead of biological sex.

The definition for the word "male" has also been updated to reflect gender identity and not simply biological sex.

A federal court recently blocked some of Biden's measures to create protections for gender identity in lieu of those for women.