"Meredith Roberts and our leadership over there has been so welcoming to my not-at-all secret gay agenda." 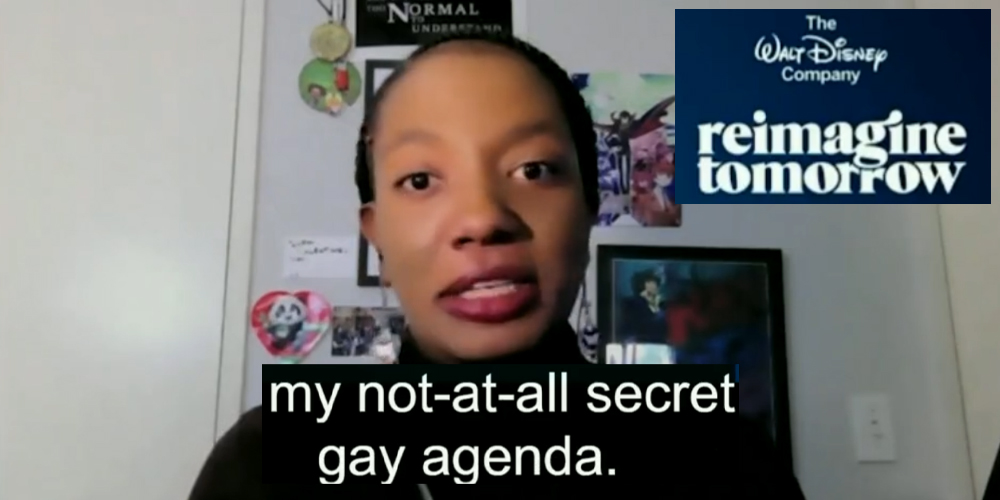 Disney executive producer Latoya Raveneau has proudly admitted to her colleagues at a company meeting discussing Florida's anti-grooming bill that she’s been actively adding a political message to the products she has worked on.

This is followed up by a separate affirmation by Disney corporate president Kathy Burke that they'll be prioritizing these subjects more actively going forward.

These remarks were made during Disney's recent "all-hands meeting about the Florida parental rights bill," said investigative reporter Christopher Rufo when publishing a video of the staffer's remarks to social media.

Raveneau is credited as an executive producer on seven episodes of "Rise Up, Sing Out" on Disney Junior. The program has characters singing about racism and microaggressions. She also brings up the "The Proud Family" series at multiple points in the social media clip, and IMDB credits Raveneau with two episodes on the "Louder and Prouder" 2022 reboot.

Here's what she told co-workers during the Disney company meeting:

"I love Disney's content. I grew up watching all of the classics. They have been a huge, informative part of my life. But at the same time, like, I worked at small studios most of my career, and I'd heard – you hear whispers. Like I'd heard things like, 'Oh you know they won't let you show this in a Disney show,' and I'm like, 'Okay.' So I was a little sus when I started."

Raveneau came to realize her built-up expectations were different from the reality she experienced when first starting her work at the Disney company.

"But then, my experience was bafflingly the opposite of what I had heard. On my little pocket of Proud Family Disney TVA, the showrunners were super welcoming, Meredith Roberts and our leadership over there has been so welcoming to my not-at-all secret gay agenda. So like I felt like maybe it was that way in the past but I guess something must have happened in the last… they were turning it around, they're going hard, and then, all that momentum that I felt, like that sense of I don't have to be afraid  to have these two characters kiss [...] like I was just wherever I could just basically adding queerness to like [...] if you see anything queer in the show [....] no one would stop me and no one was trying to stop me."

Rufo followed this up by posting another Disney staffer confessional, this time coming from corporate president Kathy Burke.

"I'm here as a mother of two queer children, actually: one transgender child and one pansexual child, and also as a leader. And that was the thing that really got me because I have heard so much from so many of my colleagues over the course of the last couple [of] weeks. In open forums and through emails and phone conversations, I feel a responsibility to speak, not just for myself but for them.”

There's a skip in the video. Burke continues: "We had an open forum last week at 20th where, again, the home of really incredible groundbreaking LGBTQIA stories over the years, where one of our execs stood up and said, 'You know, we only had a handful of queer leads in our content.' And I went, 'What? That can't be true!' And I realized, 'Oh. It actually is true.' We have many, many, many LGBTQIA characters in our stories, and yet, we don't have enough leads and narratives in which gay characters just get to be characters and not have to be about gay stories. That's been very eye-opening for me, and I can tell you it's something that I feel perhaps had this moment not happened, I, as a leader, and as well as my colleagues would not have focused on. Going forward, I certainly will be more so. I know that we will be, and I hope this is a moment where– shoot, the 50 percent of the tears, sorry, are coming– we just don't allow each other to go backwards."

This isn't the first response from Disney staff of this caliber. Earlier in March, it was revealed Pixar reinstated a "same-sex kiss" in the upcoming Buzz Lightyear origin story movie as an act of protest against Florida's legislation.

Earlier this month, it was first reported how Disney's new CEO Bob Chapek did not want the company to get involved with the "political football" in making a statement over Florida's recently approved Parental Rights in Education bill that prohibits educators from teaching sexualized content to students through grade 3.

But the company has since capitulated to the demands of the political activists among their employee base. When Florida Governor Ron DeSantis signed HB 1557 on Monday, Disney vowed to work to strike it down in the courts.

DeSantis responded on Tuesday by saying Florida legislation is "not based on the demands of California corporate executives. They do not run this state. They do not control this state."

It was in May of last year that Rufo published an expose about the Walt Disney Company's inner employee culture. It was a routine that included pushing critical race theory ideology onto staff members at a corporate-wide level.