WATCH: Doug Mastriano calls out Josh Shapiro for his 'failure and incompetence' as PA attorney general

Mastriano observed that the "lawlessness is an indictment on the failure and incompetence of Josh Shapiro" and added "There is an anti-police culture here. Josh Shapiro is part of the defund the police movement." 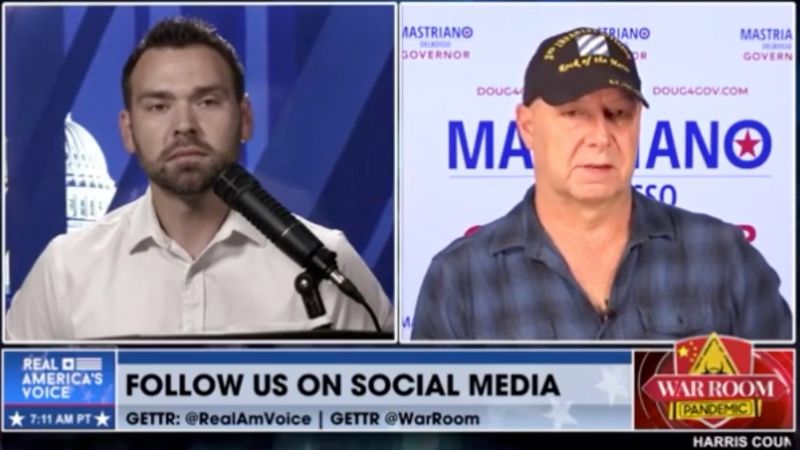 On Friday's episode of War Room, Jack Posobiec spoke with Doug Mastriano, the Republican candidate running for governor of Pennsylvania, who told the host that his opponent, Josh Shapiro has failed the people of the Keystone State and he'll reverse course on day one of potential his governorship.

"Lawlessness is an indictment on the failure and incompetence of Josh Shapiro," said Mastriano.


As the two discussed several key issues on the ballot, Mastriano started with the need for Pennsylvania to take the lead in energy production. "We're sitting on a goldmine," Mastriano said, "and we're blessed with some high quality energy resources underneath our feet and God has really blessed Pennsylvania not only as the birthplace of our nation, of course, but as a place where we could be an energy power."

Pennsylvania has the resources to be a leader in energy production with its reservoirs of natural gas, coal, anthracite, and oil. Mastriano noted that current Democratic Governor Tom Wolf along with state Attorney General Shapiro have driven the energy sector out of the state, along with the high paying jobs that accompany it.

"I want every person in Pennsylvania to be able to enjoy the benefits of us being an energy powerhouse," Mastriano said, adding that the future prosperity will make it so "your kids and grandkids will want to stay."

He also noted that with a robust Pennsylvanian energy sector "America can play a key role in providing energy to the Germans who are drunk right now on Russian oil and gas."

"Why aren't we selling Pennsylvania gas to them and to make the world a bit safer and stable?" Mastriano added.

He also mentioned school choice, as parental rights have been a cornerstone of his platform

Speaking of Philadelphia, Mastriano said, "although it's the bluest of blue counties in our entire state, 88 percent of the people agree with me on school choice because they want to be able to pick and choose schools that their kids might have a future and an opportunity."

"Josh Shapiro is opposed to school choice except for himself. Since he can afford it. He sends his kids to a very expensive school," Mastriano added.

Parents wanting to choose where to send their children to school in Philadelphia is also related to the city's historically high crime rate.

Posobiec noted how the crime is so bad that the "iconic brand" Wawa is "pulling out of their home city due to crime and six years of Josh Shapiro."

Mastriano observed that the "lawlessness is an indictment on the failure and incompetence of Josh Shapiro" and added "There is an anti-police culture here. Josh Shapiro is part of the defund the police movement."

As the two concluded Mastriano noted that, "On day one, I will be forming a sex trafficking task force in the state."

"I'm disgusted at how soft on crime Pennsylvania is, especially on the abuse of kids and the abuse of women, and as far as sex trafficking, and so we're gonna have a multi-pronged approach from a legal perspective on day one, I will be forming a sex trafficking task force in the state," he said.

Mastriano has vowed to increase penalties for those found in possession of child pornography, as well as pedophiles.

Pennsylvania has emerged as a central location in the trafficking of women and children, something Mastriano has been vocal about ending.
ADVERTISEMENT
ADVERTISEMENT
PosoMastriano