Principal Tipton Blish of the Broadview- Thompson K-8 public school in Seattle admitted in an email that classrooms will need to be reorganized to due to plummeting enrollment. 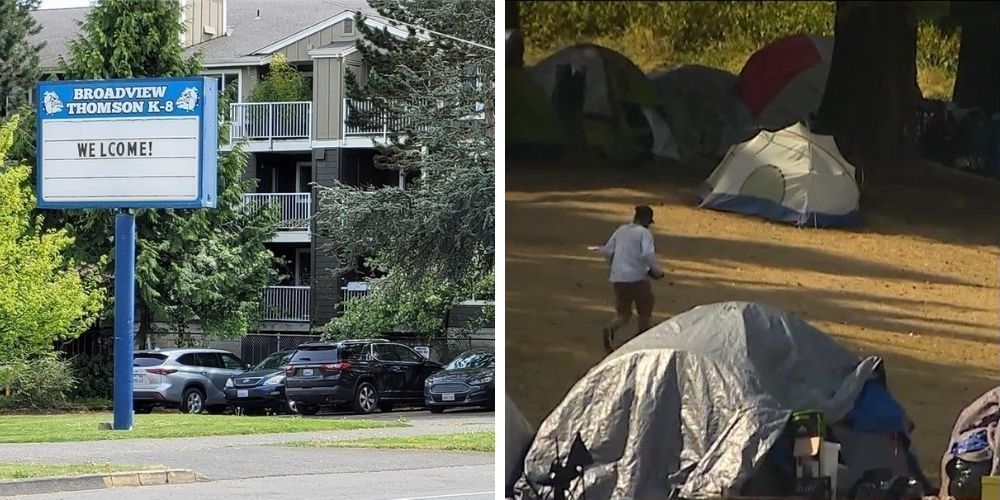 Principal Tipton Blish of the Broadview- Thompson K-8 public school in Seattle admitted in an email that classrooms will need to be reorganized to due to plummeting enrollment. The school is currently home to a violent homeless encampment which has been growing for more than a year.

In an email sent to the families at the school Blish said, "At some point this week, we may need to reorganize classrooms. This is due to lower numbers of students than expected and the need to move at least one teacher, possibly two to other positions in Seattle Public Schools."

Blish added, "Seattle Schools has made the decision to reduce the number of teachers at a handful of schools earlier than it has in the past and has done so in schools with significant drops in student numbers. Broadview-Thompson's current size is nearly 100 fewer than was predicted in January."

The email directly contradicts public disclosure requests filed by The Post Millennial which showed an increase in student enrollment throughout the summer heading into the fall. The numbers were suspect as many families told The Post Millennial that they had pulled their children because of safety concerns.

At a meeting for parents and neighbors earlier in the month, attendees were told that enrollment was down by 75 students. Seattle Public Schools has not returned The Post Millennial requests to comment on the discrepancies.

School officials have repeatedly denied that the encampment was a security threat despite numerous lockdowns in the school, violence in the encampment and overdose deaths. Due to the encampment, the district was forced to hire security guards after having banished police officers as school resource officers from campuses in 2020.

It has been almost a month since school began and the encampment has only grown, despite the school having pledged to remove the encampment before the start of the academic year. In July, school officials pledged to school families and neighbors that one-man with an extensive criminal record would solve the problem. Neighbors reported the encampment growing over the summer, yet nothing was done to change course.

Other homeless encampments have been cleared within a week. The notorious City Hall Park encampment, the site of a fatal stabbing, multiple assaults and the alleged home of a suspect who attempted to rape a King County Courthouse employee, was shut down and cleared in just a few days.

In emails sent by neighbors and employees to The Post Millennial, board president Chandra Hampson and Director Zachary DeWolf demanded Mayor Jenny Durkan not allow the encampments to be removed from school grounds.