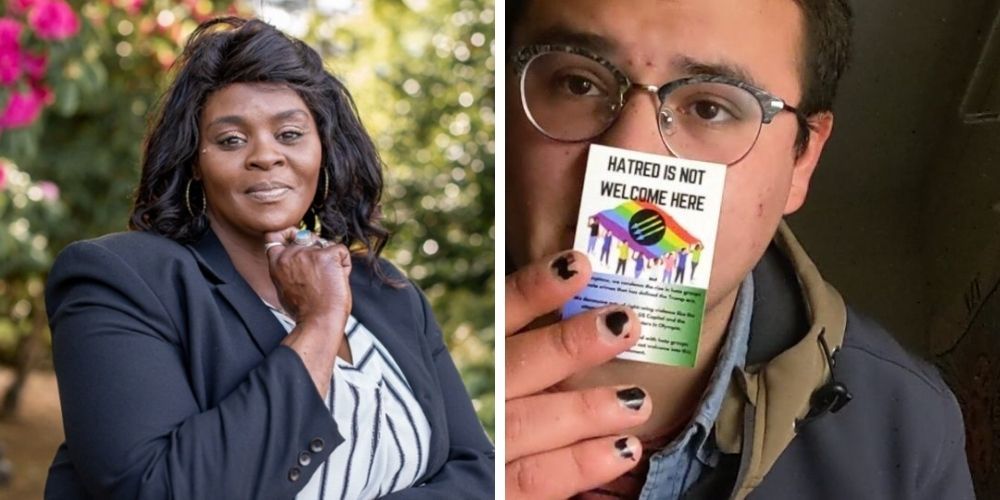 A candidate running for City Council in Olympia, WA, Talauna Reed, has been working alongside known Antifa extremist Miguel Luis Lofland. Lofland organizes violent anti-police protests and runs his own newspaper called Antifa News Network, which is primarily used to call for violence against those who he considers to be opposition to the Antifa movement.

Lofland, who holds an "Antifa News Network" press pass,  has provided Reed with campaign interviews and footage of anti-police protests that she organizes in Olympia. Reed also uses Lofland as her personal videographer, although it's unclear if he has been compensated for his work.

On May 18, Reed was interviewed by Miguel Louis Lofland for the far-left Cooper Point Journal. The two discussed her campaign for city council and how she got involved in racial justice activism.

Lofland's personal social media accounts shows that he has filmed Reed's events on many different occasions throughout the past five months.

During a recent event at the Washington State Capitol, Reed had Miguel Lofland introduce her as a speaker. Reed, who shares the same extremist views as Lofland, started her speech by saying "F*ck the police" then called on individuals to "tear everything up in this f*cking city, until they do what we want them to do!"

Miguel Lofland has an extensive history of organizing violent protests in Olympia and frequently calls on individuals to engage in political violence. His participation in violence during the events has led to police officers arresting him on many different occasions.

On May 11, Lofland organized a group of Antifa militants to intimidate police officers and their families who were attending a law enforcement appreciation dinner in Bellevue, WA. The group attempted to disrupt the event but failed due to the heavy amount of police presence.

Outside the police appreciation dinner, Miguel Lofland confronted an independent reporter and threatened him, said "You're sad because you lost on J. 6. Your people lost and my people are winning and we're going to continue killing you."

In March, Lofland instigated another act of political violence and targeted young conservative Turning Point USA students that were rallying for their second amendment rights at the Washington State Capitol. Miguel Lofland printed flyers and placed them up around the city which called on the community to protest against the student-led event. Lofland led a group of Antifa militants dressed in their black bloc uniforms to obscure their identities where they then assaulted three young students.