Far-left rioter John Sullivan has falsely accused Antifa expert Andy Ngo of storming the Capitol building on Jan. 6 and then fleeing the United States to "avoid prosecution" from the federal government "due to his direct involvement in the insurrection." 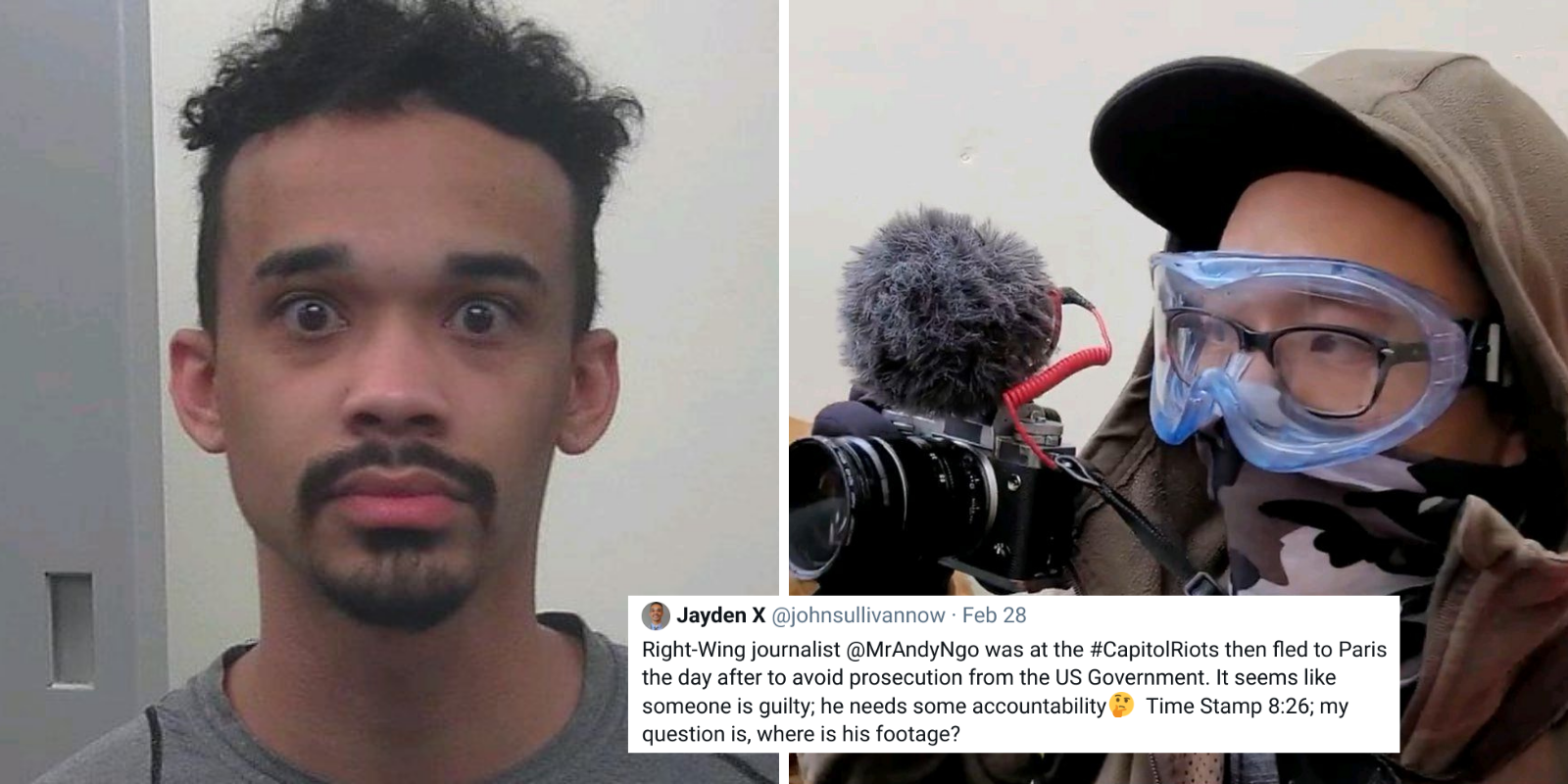 Far-left rioter John Sullivan has falsely accused Antifa expert Andy Ngo of storming the Capitol building on Jan. 6 and then fleeing the United States to "avoid prosecution" from the federal government "due to his direct involvement in the insurrection." The alleged photographic evidence that Sullivan points to pictures another Asian man.

"Right-Wing journalist @MrAndyNgo was at the #CapitolRiots then fled to Paris the day after to avoid prosecution from the US Government. It seems like someone is guilty; he needs some accountability," Sullivan tweeted Sunday morning.

Sullivan himself is facing multiple criminal charges by federal authorities for his alleged involvement in the Capitol Hill riot. There are recorded examples of the 26-year-old agitating the right-wing crowd. When radical individuals climbed the wall to reach the plaza just outside the Capitol building's entrance, Sullivan can be heard shouting on-camera: "You guys are f—ing savage. Let's go!"

"We did this together. F— yeah! We are all a part of this history," Sullivan shouted in video evidence cited by federal prosecutors. "Let's burn this shit down."

He is now accusing Ngo, who has alibis that can attest to his whereabouts overseas on the day in question, of the same inflammatory and evasive tactics that Sullivan employed during and in the aftermath of the Washington attack.

"I was not there and the person in this photo is not me," commented Ngo.

Sullivan continued to draw the false comparison, uploading an old 2017 image of Ngo during his Portland State University days next to an image of the unidentified Asian man captured at the 8:26 mark of his 50-minute continuous YouTube video.

Sullivan then blasted a link across Twitter to his website. On the linked page, he deepened the smear campaign. "Andy stood in front of me the entire time during the insurrection with his tan hood pulled up over his black baseball cap, wearing clear goggles and a black and grey camo face covering," Sullivan insisted.

He alleged that the FBI had let numerous other journalists go, including Ngo.

Ngo announced in late January that he was forced to flee to the United Kingdom following months of death threats from Antifa terrorists and visits to his family's residence. "My hometown of Portland, Oregon, is the epicenter of American Antifa," Ngo told Sky News Australia in the Jan. 23 interview.

"In fear of being found connected with the riot, Ngo fled the country to avoid prosecution from the US Government due to his direct involvement in the insurrection," Sullivan reiterated in his blog post dated Sunday, further asserting that Ngo has "many ties with far-right groups" such as Patriot Prayer.

"Ngo is not an unbiased source of information; clearly, aiding and abetting his fellow compatriots in the insurrection by fleeing the country and knowingly hiding his footage," Sullivan concluded. "He realized that he would expose himself and many violent rebels seeking to linch Congress members on January 6th."

Sullivan went on to claim that as "cover-up," Ngo suggested that Antifa and Black Lives Matter militants "dressed up as Trumpets" to infiltrate the pro-Trump mob, thus constructing this "deception from the reality of the situation to save his brothers in arms from being imprisoned for their horrendous acts of violence."

However, on the day of the siege, Ngo even dismissed conspiracy theories that Antifa was behind the federal breach. "The people occupying the Capitol building do not look like antifa people dressed in Trump gear or Trump costumes," Ngo, in England at the time, said to the Washington Examiner.

Ngo was skeptical that Antifa operatives could have coordinated such an infiltration on this mass scale before "without any of that information leaking out."

The Post Millennial reached out to Sullivan to inquire about what evidence he has to support these unsubstantiated claims other than the surface-level observation that the unknown male captured in the footage is Asian.

Sullivan said that his naming Ngo depends on "several other people validating this assumption." Sullivan then clarified to The Post Millennial that his allegations are "based on observation of the video and past videos of [Ngo]."

TRIGGERnometry co-host Konstantin Kisin confirmed with The Post Millennial that Ngo was indeed with him and his colleague, fellow comedian Francis Foster. Ngo's appearance on the London-based free speech podcast premiered Jan. 27.

Ngo told The Post Millennial on Monday that he has brought the defamation by Sullivan to his lawyer's attention and will be responding soon.

Sullivan decried in his blog post how he was charged as an agent provocateur who lacked press credentials from any accredited news agency, which he stated invalidated his work "as an independent journalist and small business owner."

An FBI special agent had noted via sworn affidavit that Sullivan even admitted that he has no press credentials. The federal investigation did not yield "any connection between Sullivan and any journalistic organizations."

Sullivan still positioned himself as the only black journalist at the Capitol Hill riot who was "brave enough" to face the "racist rebels flying their confederate flags neo-nazi symbols," he detailed in his recent writing.

"I risked my life to capture the story that CNN, ABC[,] NBC, and Fox News couldn't even come close to telling," Sullivan maintained, showcasing his almost hour-long footage that caught the shooting death of 35-year-old Air Force veteran Ashli Babbitt inside the Capitol building. He had received $35,000 each from CNN and NBC for rights to air his recording, according to invoices from the major left-wing broadcasters filed by Sullivan's legal counsel in federal court. He added: "The only goal that I had in mind that day was to provide the public with complete transparency and accuracy of the events that transpired."

CNN's Anderson Cooper had featured Sullivan on his show in the wake of the riot to present his account as the self-proclaimed heroic reporter. The payments were disclosed as part of the Utah native's argument that he was there to "document and report" the event for journalistic purposes, not to incite or engage in violence.

Regarding his continued usage of social media, Sullivan's attorney argued in another court filing that "it is oppressive to require that he not be allowed to continue his primary area of employment for an extended period of time."

The federal magistrate judge overseeing the case ruled on Feb. 16 that he can continue to use Facebook and Twitter, but that Sullivan—the founder of Insurgence USA—must cut ties with the Utah-based extremist group.

At the hearing related to Sullivan's release conditions, Judge Robin Meriweather split the difference between prosecutors seeking to eliminate his social media presence and his defense lawyer who called the restrictions an "oppressive, overbroad" assault on his client's constitutional rights. Sullivan's internet usage was ordered to be monitored by probation officials while he remains under home detention awaiting possible trial.

After Sullivan was charged, he was freed from jail on house arrest under specific conditions despite objections. Officials had warned the court then that Sullivan "thrives on chaos" and "uses messaging apps to set up meetings and set up riots."

Federal prosecutor Bryan Reeves stressed Sullivan's protest-drawn persona and mischief-making nature. "He will pose as different members of organizations, even those that have disavowed him" just to stir trouble, Reeves contended.

His checkered past has spawned speculations about the self-styled social justice activist's true motives. Even figures on the political left have questioned Sullivan's post-siege behavior and condemned his successful attempts to insert himself in the protest community. BLM's Utah chapter leader Lex Scott declared to Fox News that the organization does "not want to be associated" with Sullivan at all.