Trans activists with signs reading "Transphobes Go Home" and "We Trust Doctors, We Listen to Kids" attempted to use megaphones and noisemakers to drown out members of Gays Against Groomers, who were armed with their own microphone and loudspeaker. 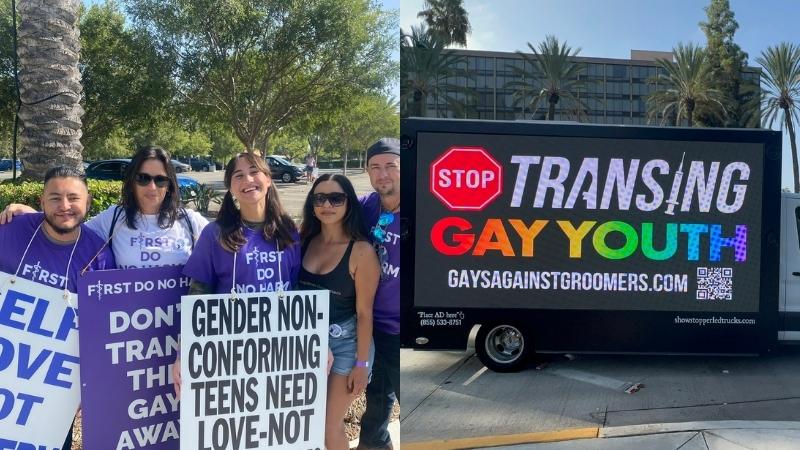 Members of parents and anti-child grooming groups on Saturday gathered outside the American Association of Pediatrics Convention in Anaheim, California for the "First Do No Harm Unity Rally," protesting against the "medicalization of gender-nonconforming kids."

Representatives from the organizations Advocates Protecting Children, Gays Against Groomers, Lesbians United, MOM Army, Our Duty, Partners for Ethical Care, and others peacefully protested at the Anaheim Convention Center, holding banners with phrases such as "STOP TELLING GAY GIRLS THEY'RE TRANS BOYS," and "MOMS AGAINST MASECTOMIES FOR MINORS."

Cole, who is a biological female, is a self-identified "former trans kid" who underwent testosterone treatments and puberty blockers at 13 years old, and had a double mastectomy at 15. Now, as a young adult, Cole has built a platform on warning others against making life-changing medical decisions as children.

During the rally, Cole read aloud a letter from a group of formerly transgender youth, addressed to Attorney General Merrick Garland, urging him to "do the right thing" and ignore the letter sent to the Department of Justice by groups who support the unscientific "gender affirmation" form of care for children.

"... American medical organizations have not conducted a systematic review of the evidence; their recommendations are based on a small number of badly flawed studies and ignore contravening evidence from other studies," she continued, referencing the lack of scientific evidence backing puberty blockers, cross-sex hormone therapies, and sex change surgeries for children.

"… The recent letter by these groups calling on the DOJ to put pressure on social media companies to censor who they portray as 'high-profile users on social media' sharing 'false and misleading information' is nothing more than an attempt to silence the reasonable voices of concerned critics calling for a more cautious approach to experimental medical practices impacting vulnerable children."

Outside of the convention center, the anti-medicalization activists and counter-protestors clashed.

Trans activists with signs reading "Transphobes Go Home" and "We Trust Doctors, We Listen to Kids" attempted to drown out members of Gays Against Groomers with megaphones and noisemakers, but they were armed with their own microphone and loudspeaker.

"Leave the kids alone!" Gays Aginst Groomers California chapter leader Frank Rodriguez shouted as counter-protestors gathered around him. "I am not afraid!"

The protests came just weeks after it was revealed that the leading transgender health association released plans to lower the recommended age for minors to obtain cross-sex hormones, and after the Children's Hospital of Philadelphia was exposed for prescribing puberty blockers for children as young as eight, and sex-change surgeries starting at around 14.
ADVERTISEMENT
ADVERTISEMENT
aap protest