"Do you feel like you have to jump down every rabbit hole you see? Do you get mad when you see liars taking advantage of people?" 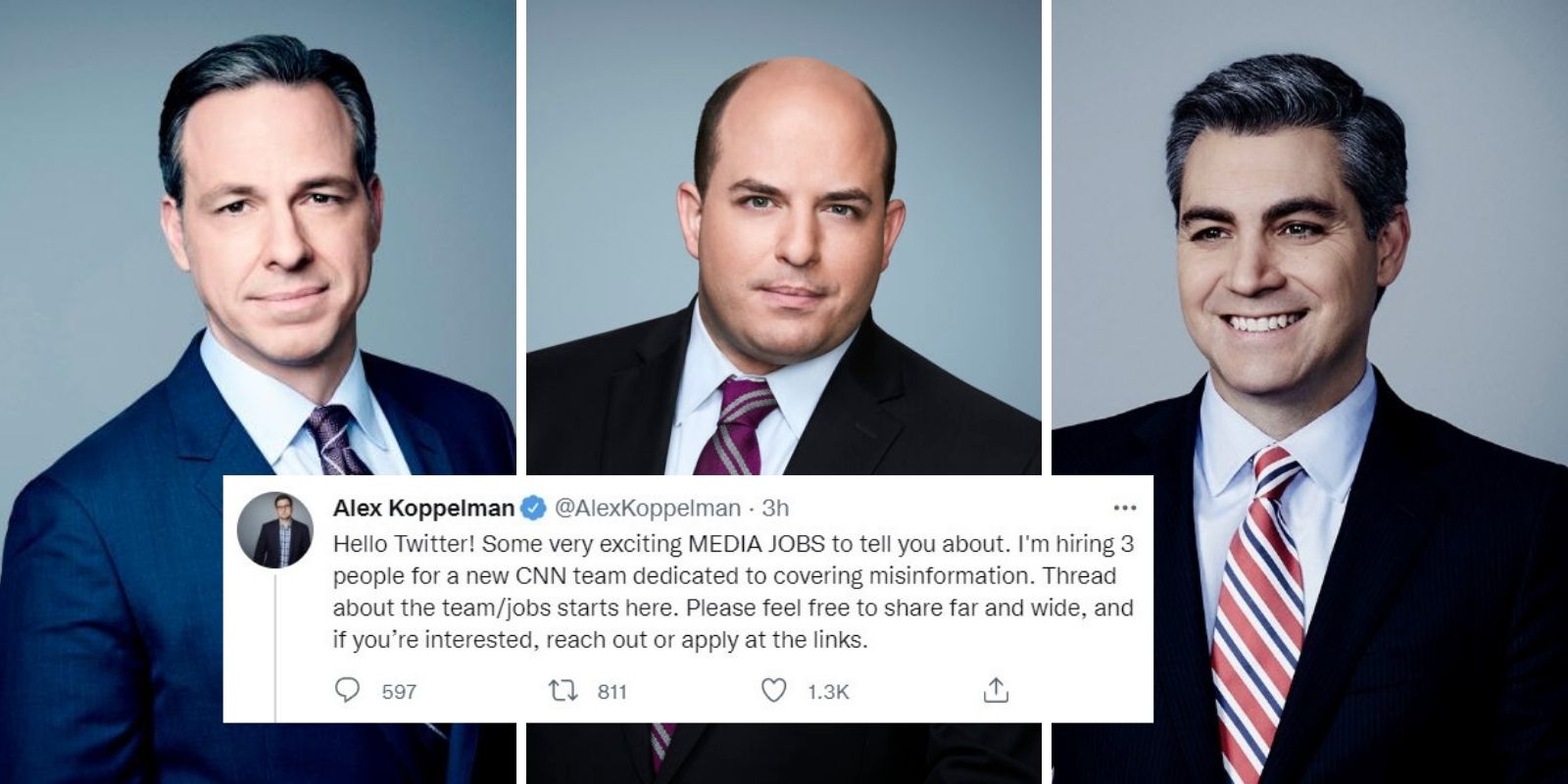 A managing editor for CNN Businesss made the public aware Tuesday of new job postings at the left-wing news company, looking to fill out the outlet's "misinformation" department. Unfortunately for the liberal network, this is the same public who has a long memory of CNN's past scandals.

"Hello Twitter! Some very exciting MEDIA JOBS to tell you about. I'm hiring 3 people for a new CNN team dedicated to covering misinformation. Thread about the team/jobs starts here. Please feel free to share far and wide, and if you’re interested, reach out or apply at the links," Koppelman tweeted Tuesday.

"What do we mean by covering misinformation? Really it's about covering reality: The uses, abuses, and distortions of it, the people twisting it, and the effect that has on all of us. We already do a lot of important work on this; we want to do more," Koppelman continued the four-part Twitter thread.

There's three positions on the docket: one editor and a pair of reporters. As for job description of the first role, the editor gig boils down to making sure the work done by misinformation reporters is clean to run: "We're looking for someone who can run day-to-day news on the beat, oversee incredibly sensitive and complicated and important enterprise stories, and help us define and develop the team."

As for the two reporters CNN seeks to complete the pending team, Koppelman asked: "Do you feel like you have to jump down every rabbit hole you see? Do you get mad when you see liars taking advantage of people? Do you spend more time on the internet than anyone really should? This might be the job for you!"

"CNN is starting a new team covering misinformation and we’re searching for reporters to be part of it. What does that mean exactly? Let’s put it this way: We’re looking for people to cover reality. That includes the uses and abuses and distortions of it, the people twisting it, and the effect that twisting is having on all of us, from schools closed over rumors about TikTok challenges to vaccine refusal to extremism and insurrection," the job description reads for the reporter roles.

Then the employer posts a list of bullet points outlining what it takes to apply for the job. The usual investigatory prowess and "4+ years" of experience are mentioned, but CNN's posting also makes a number of carve-outs:

It's a lengthy online message that boils down to deplatforming advertisers that support adversaries of the network's interest, while towing the corporate line of what the progressive establishment expects out of CNN.

The move's irony is paramount in this situation given how the Democrat-aligned network also announced the hiring of Twitter left-wing provocateur Rex Chapman on Tuesday—someone labeled an "endless source of misinformation" by Fox News, which highlighted the public perception doubting Chapman's credibility.

It's unclear what this means when it comes to CNN fact checking their own colleagues in the media establishment. A story ran by NPR on Tuesday morning about mask mandate requests by SCOTUS was debunked by nightfall.

When it comes to other work by establishment media fact checkers, USA Today had to retract a claim about Biden looking at his watch last year when US military bodies returned from his administration's botched withdrawal from Taliban-controlled Afghanistan. The Associated Press fact checkers have been called out multiple times over the subject matter they choose to discuss, as well as casting doubts about some of the "experts" they've cited to refute claims more recently.

As for the job description detailed by CNN, the expected standards outlined will likely amount to hunting down people who make GIFs, in practice.

CNN is the outlet that had to fire TV personality Chris Cuomo for covering up and helping out his older brother, former New York Gov. Andrew Cuomo. CNN had also spread the now-debunked "Hands up, Don't shoot" myth surrounding Michael Brown's death, a slogan that became a rallying cry for Black Lives Matter.

This is in addition to the multiple CNN producers who face allegations of sexual misconduct involving underaged victims in pedophilia scandals.

The network reportedly had a nosedive in viewership, about a staggering 90 percent loss after a year of fake news and partisan witch hunts.