As a crowd of over 200 people watched, event organizers confronted Lake, telling her to go to her separate room; she protested and said that Hobbs should come out and debate her. 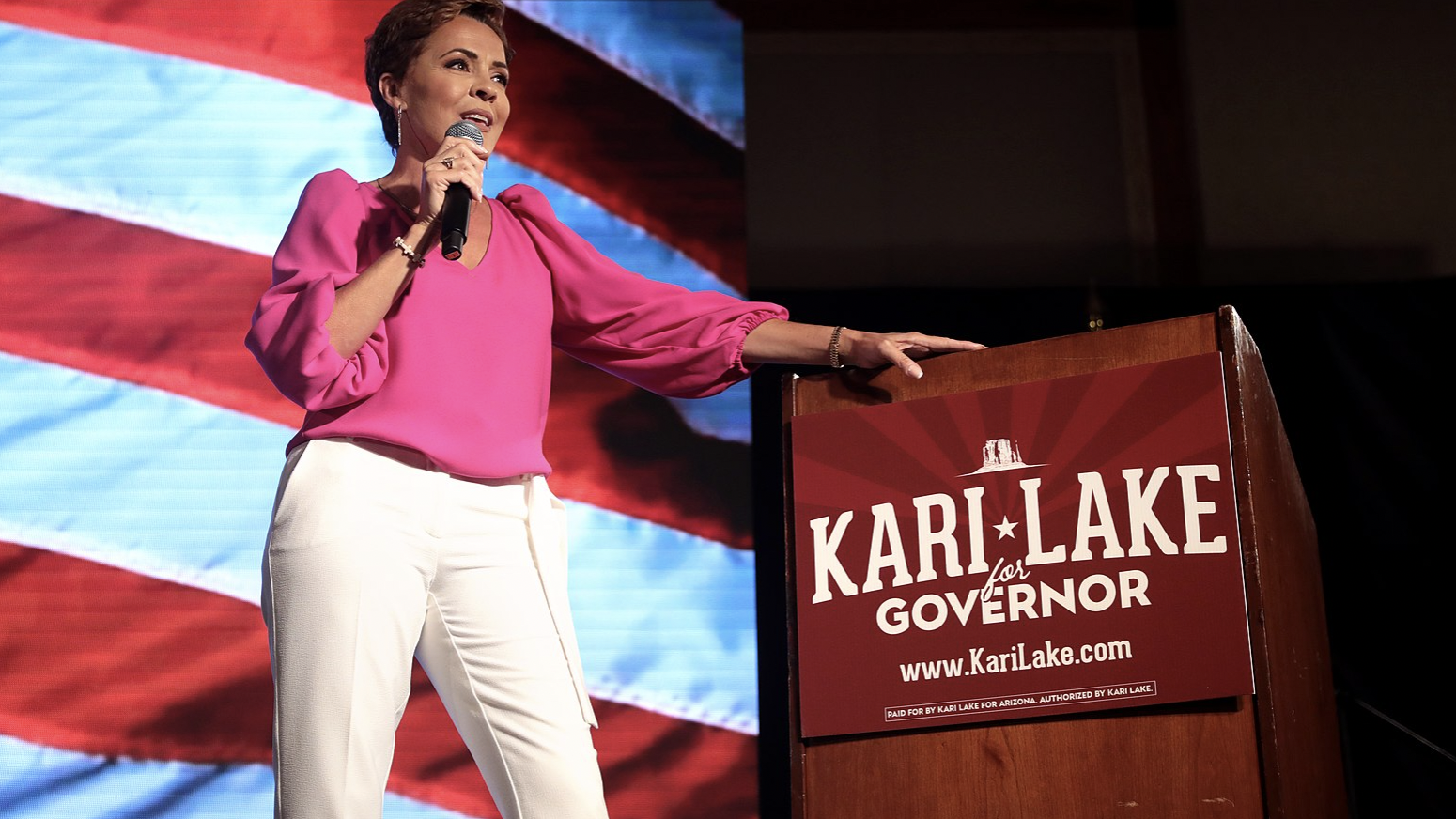 Olivia Rondeau
Oct 8, 2022 minute read
ADVERTISEMENT
ADVERTISEMENT
Arizona Republican gubernatorial candidate Kari Lake was kicked out of the audience at her own race's town hall event, during which her Democratic opponent, Katie Hobbs, refused to take the stage with Lake present. After a brief confrontation between Lake, who requested to take the stage alongside her rival, and the event's moderator, the gubernatorial hopeful was forced to leave the auditorium for the forum to begin.

Hobbs, who has repeatedly refused to debate Trump-endorsed Lake, was set to take the stage at the pre-recorded town hall on Monday at Phoenix's Herberger Theater Center when event organizers told the Republican to leave the room, reported NBC.

Under the rules for the taped event, which will air at 7 pm Saturday Arizona time, audience members were prohibited from taking video, and the candidates were reportedly not supposed to be onstage at the same time.
However, just before Hobbs was supposed to walk out onto the stage to address potential voters, trouble arose when Lake was spotted sitting in the front row of the audience instead of in her allocated green room.

According to eyewitness accounts, event moderator León Krauze, a Univision News anchor, invited Hobbs to the stage, but she did not come out.

Krauze was then seen putting his finger to his ear piece that was connected to the control room, then told Lake to leave the room.

As a crowd of over 200 people watched, event organizers confronted Lake, telling her to go to her separate room as she protested and said that Hobbs should come out and debate her.

As seen in a video recorded against the rules that was obtained by NBC, Lake pleaded her case with Krauze, as well as event producer Mary Rabago, to no avail.

​​"I would love to be on the same stage actually. Is that possible?" Lake asked.

Krauze replied: "I know it would [be something you would want to do]. And I'm going to ask [Hobbs] about that. Trust me."

Lake then told Krauze that she wanted "a real debate," to which he repeated that he would ask Hobbs about it.
"Unfortunately, you’re not going to be able to share the stage with Miss Hobbs," he argued. "I cannot invite her to the stage if you are in the audience. This is not me. This is the… the campaign agreement."

"I'm happy to be here. I don't think I should be trapped in my room. I'd love to be part of this," Lake said, partially facing the audience. "We should be talking about the issues that affect everyone… I want the people here to know I'm willing to sit on stage with Miss Hobbs and talk about the important issues."

Rabago then took to the stage to address Lake, asking her to "do us the honor to go to your designated area… This is a town hall. That was the agreement that we have. I really want to make sure that the audience… can hear you both. So if you don't mind — continue with our agreement. I would really appreciate it so we can respect the time of everyone."

"You will have plenty of time, I promise," Rabago continued. "We designated the same amount of time for both of you guys. We're going to have you onstage. This is the opportunity for you guys to share your platform, your ideals… your vision. But please respect that agreement that we have."

After several minutes, Lake complied and left. Only after she was out of the room did Hobbs, the Arizona Secretary of State, begin her portion of the town hall.

After Hobbs' appearance, Lake was permitted to come to the stage, where she spoke on why she decided to run for Arizona governor, highlighting her 30-year career as a journalist and her vision to help secure freedom for the future of the country.

"She rattled her opponent. She was big, brash, and very larger than life, Trump-esque. Anyone who thinks she was there to follow all the rules doesn't know Kari Lake," he said to NBC.

The Hobbs campaign sent NBC a pre-event email from the organizers that said "each candidate will have their own separate green room to prep and hold prior to going onto the main stage."

According to the Lake campaign, they received no such email, and they were under the impression that the green room was an amenity, not a requirement.

"Hobbs can go hide in the green room. @KariLake will happily make her case to the people," said Lake's official campaign Twitter account on Saturday.

Lake herself has called out Hobbs on multiple occasions, most recently highlighting the Democrat's failure to appear at the Hispanic Townhall Election Event on Wednesday.