"Don’t go anywhere or to another state. Florida is overrated. I shouldn’t say this but look at the governor. It starts at the top down." 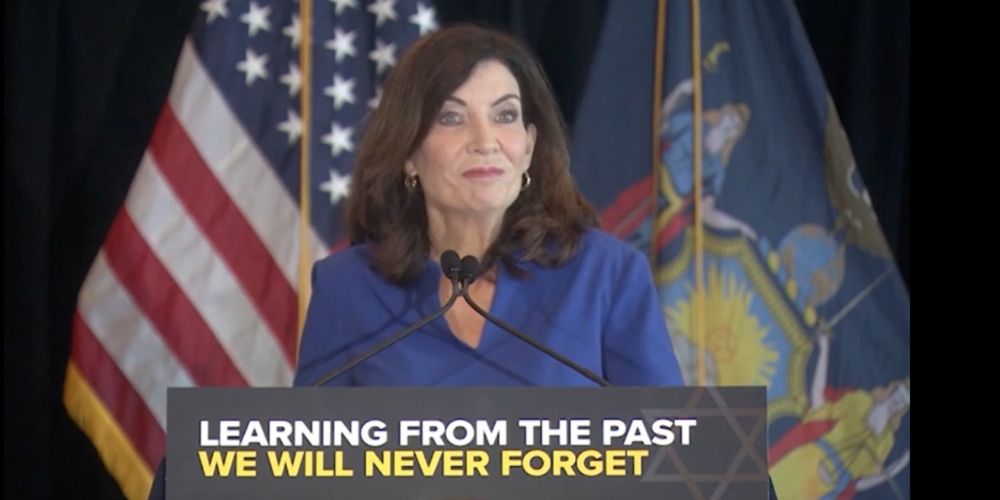 Hochul remarked, "I just want to say to the 1.77 million Jews who call New York home: Thank you for calling New York home. Don’t go anywhere or to another state. Florida is overrated. I shouldn’t say this but look at the governor. It starts at the top down."

She then added, "Getting in trouble, gotta stay on script," before introducing Holocaust survivor Celia Kener at the Museum of Jewish Heritage.

The Jewish advocacy group Tikvah organized a May appearance at the same museum by DeSantis. The museum canceled the event due to protests over the governor's conservative record and denied that DeSantis had been essentially banned from the property.

Brooklyn Councilwoman Inna Vernikov slammed the museum and Hochul on Friday, accusing both of having a double standard on who gets to speak at the location which hosted Democrats but banned Republicans.

Vernikov, a Ukraine-born Jew, asked in a tweet, "A few months ago, @MJHnews refused to rent space for a conf. featuring @RonDeSantisFL  to avoid being political. Yesterday, just a little over 2 months before her gubernatorial election, the museum had @GovKathyHochul  sign a bill. Will they let me host her (R) opponent @leezeldin?"

Hochul's ill-timed partisan attack against DeSantis comes after hundreds of thousands of New Yorkers, including many Jews, have moved out of the state, with many choosing to resettle in Florida. Many cited the reason for moving as the strict Covid protocols in New York established by disgraced former Governor Andrew Cuomo and continued when Hochul assumed the position after his resignation.

During the bill signing Hochul discussed the anti-hate initiatives included in the legislation that required the state Education Department to analyze how well schools are teaching students about the Nazi genocide of six million Jews in Europe during World War II.

Hochul cited statistics regarding the hundreds of antisemitic attacks in New York in 2022 and told reporters, "The lessons of the Holocaust need to be front and center in our minds today, as we see hatred, rising up to the surface, unfettered in ways we’ve not seen before in my lifetime."

However, many have cited New York’s bail reform legislation as one of the reasons the attacks against Jews have continued to soar. On Monday, Hochul continued blaming judges for criminals being released and claimed her administration is gathering data to prove that bail reform laws don’t need to be changed any further.

Since the bail reform was enacted, antisemitic attacks have rocked the state with some of the offenders in violent crimes being released almost immediately after they were arrested.

Some of the attacks were so violent, that many in the Jewish and other minority communities no longer felt safe in the state. That coupled with onerous Covid regulations, rising costs of living, anti-police riots, and police defunding led to a massive exodus of Jews from New York, with many choosing the Sunshine State.

The population loss was so severe that it has helped slow population growth in New York, resulting in the loss of a US House seat following the 2020 Census.

Republican gubernatorial nominee Rep. Lee Zeldin (R-NY) told the New York Post, in response to Hochul’s tone-deaf comments, "Can Kathy Hochul really be this totally out to lunch and clueless about why New York leads the entire nation in population loss?"

Dave Abrams, a DeSantis campaign spokesperson responded, "After a breakup, some people cling to the hopes of reconciliation. It’s sad to see governors acting like desperate exes. Perhaps they should spend more time relieving their people of oppressive taxes, needless mandates, shuttered businesses, and crime-infested cities. Florida’s freedom agenda works — they ought to try it."

Instead of attempting to stop the flood of residents leaving the Empire State by changing their commitment to progressive policies, New York progressives have lashed out at DeSantis.

In July, attempts were made to falsely link protesters holding Nazi flags and posters with antisemitic imagery outside a convention of young conservative activists to the convention attendees and speakers, including DeSantis.

Following the absurd claims, DeSantis' press secretary Christina Pushaw, who announced her resignation from the post on Friday to become the Director of Rapid Response on the governor’s re-election campaign, told The Post Millennial, "Throughout his time in elected office, Governor DeSantis has been a champion of the Jewish people and a defender of the State of Israel. He has stood with Florida’s Jewish community not only in his words but also in his actions, including:

Pushaw added, "As long as Governor DeSantis is in office, Florida will continue to be a safe and welcoming home for the Jewish people. That is the message the governor has always delivered. This message transcends partisan politics. And, for that matter, a Holocaust memorial should never be politicized."