The messages were leaked by a cast member to Human Events Daily's Jack Posobiec from internal communications boards. 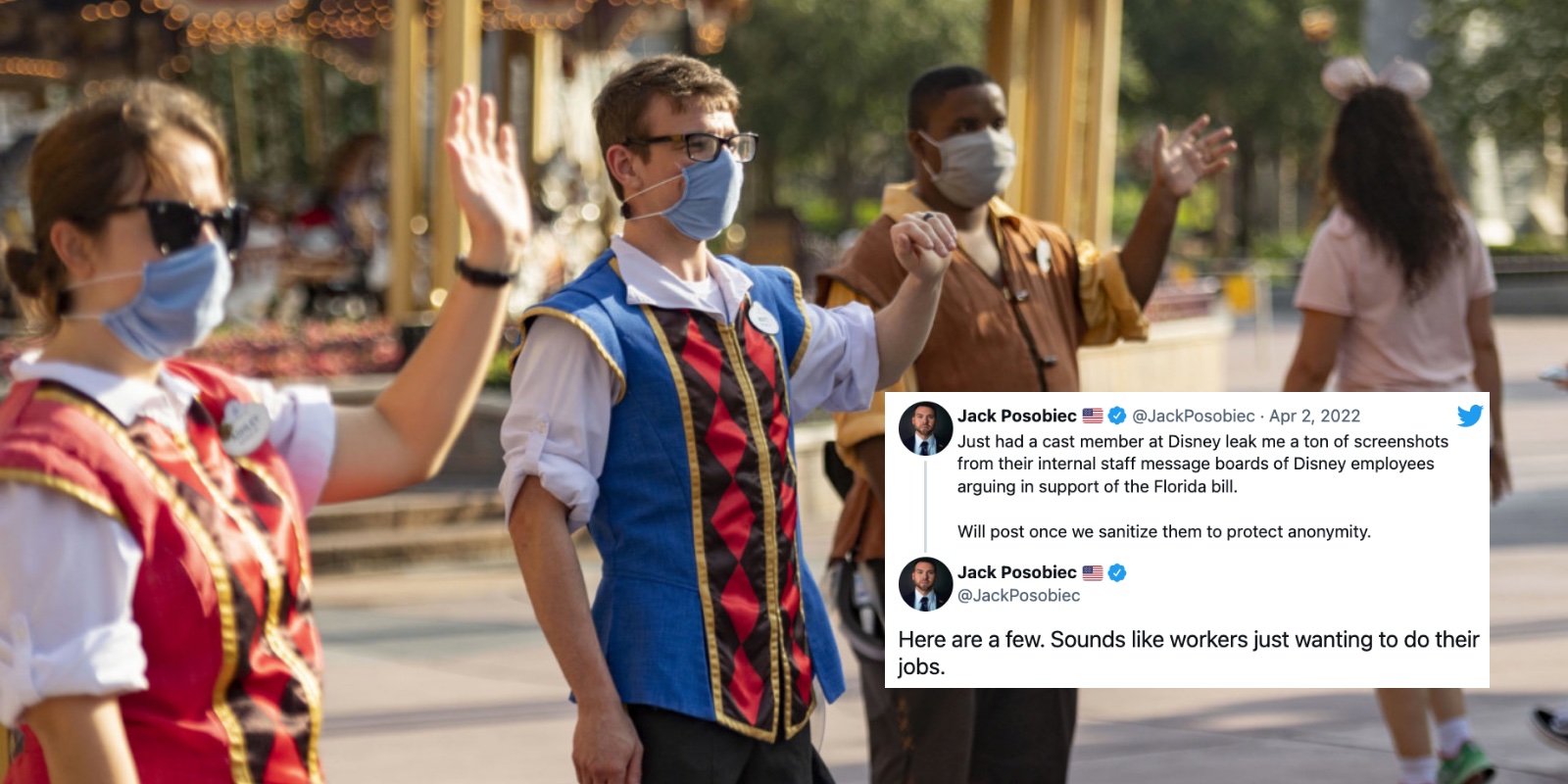 Much noise has been made by Disney corporate and executives about their displeasure with the new Parental Rights in Education law passed in Florida, but many who work at Disney not only see no problem with the law but, like most parents in the state, are in favor of it. Disney corporate had said they would "work to repeal" the state's anti-grooming law.

The messages were leaked by a cast member to Human Events Daily's Jack Posobiec from internal communications boards showing that many Disney employees are in favor of the bill and don't see it through the propagandist lens of Florida Governor Ron DeSantis' political opponents.

These show that the corporate statements claiming that Disney is entirely opposed to Florida's law that prevents activist teachers from grooming children into adult sexual lifestyle and gender identity conversations are not backed by the employees the executives believe they represent.

Names and photos have been blacked out to protect the employees speaking out, but the messages are from people young and old, are from men and women, and from people who identify as part of the LGBTQ community. The messages were screenshot from internal communication tool thehubtoo.disney.com.

"Let children be children," one cast member wrote before noting that those who are opposed to the Parental Rights in Education law likely haven't read it, since their criticisms don't hold up upon a perusal of the text. "Most everyone is ignorant as to what the actual working of what the bill says and who it applies to. It doesn't apply to gay or trans. [I]t applies to our education system."

The cast member notes correctly that the law gives "rights to the parents raising their kids as well as having regulations in our school systems." The cast member briefly outlines the bill, which says that teachers for students in grades K-3 cannot broaden conversations on gender identity or sex in classroom instruction. For older grades, conversations must be age-appropriate.

Others pointed out that upon a read of the bill, the critiques of it are way off base. One cast member who is also a parent said that the experience they had of education was that instruction in sexual orientation and gender identity was not taught, and felt further that it should not be taught for those in kindergarten through 3rd grade. Another cast member agreed with the parent, noting that opponents of the bill likely hadn't read the legislation.

Still others didn't feel that politics had any place in the Disney workplace, and referenced the original Disney, saying: "Walt did not want politics and the things of the world to be part of Disney. Sad they have forgot that."

A cast member who identified as gay also backs the law, saying that "any form of sexual education shouldn't be taught until you're older and able to understand it. Not when you're young and influential to the people who are teaching you."

"And in a perfect world we wouldn't have teachers imposing their own personal beliefs. But this world is imperfect and it does and has happened in other states." The cast member said that kids should be taught basic skills.

"So leave the bill alone because it isn't infringing on ANY member of the LGBT community nor is it to the heterosexual one. If you think it is then maybe the issue lies with you wanting children to be involved with sexual things before [they're] physically and mentally ready for it."

Others added their full agreement, and thanked the cast member for speaking out. Cast members noted that it was the media, in large part, that swooped in and determined the contents of the bill, propagandizing it with the inaccurate "Don't Say Gay" moniker.

Another parent and cast member backed the bill, saying that they don't want their "3rd grader exposed to anything other than very basic reading, writing, math, etc." and that the "legislation in no way discriminates against the LGBTQ community" and that attempts to paint it otherwise are "misinformation."

Another cast member thought that the extensive, public outcry by Disney executives against the bill was actually divisive. "Our product is meant to be an escape from day to day life and a refreshing break into fantasy. Our role is to provide a breather so our guests can face the Tower of Babble life has become a bit rejuvenated."

The company, this cast member writes, "has taken on an overreaching paternal position that is clearly not inclusive. If inclusion is a genuine goal, respecting all moral convictions, and political differences is a must. One can't pick and choose which opinions to respect and those that are not to be respected."

Disney's CEO announced that he would be undertaking a "listening tour" to hear the impact of Florida's anti-grooming legislation on employees.

"We know the moment requires urgency - and words are not enough," CEO Bob Chapek said. "So we are taking some actions right now."

The purpose of this tour is "so executives could spend their time listening employees." This cast member wanted to know when and how it would be conducted, saying that "Disney should not be taking a political stance on anything that affects ALL of it's employees one way or another." They write: "Let the work place be the work place, and live your life at your own house."

Still others felt that there were far more pressing concerns than Florida's education legislation.

Chapek came out against the bill as soon as DeSantis signed it, though the governor noted that no one from Disney had approached the legislature while the bill was under scrutiny in the legislative session to voice their concerns.

Chapek promised $5 million to Human Rights Watch, an organization that was founded to advocate for gay marriage and has since taken up the cause of advocating for gender identity. Executives at Disney have made their case for adding and inserting queer content wherever they can, and have spoken of their "not-so-secret gay agenda" in meetings about how to address the Florida law.

As a result of these altercations between Disney, one of the state's largest employers, and Florida itself, DeSantis has said that Disney's special self-governing status may come into question.