"What I would say as a matter of first principle is I don't support special privileges in law just because a company is powerful and they've been able to wield a lot of power." 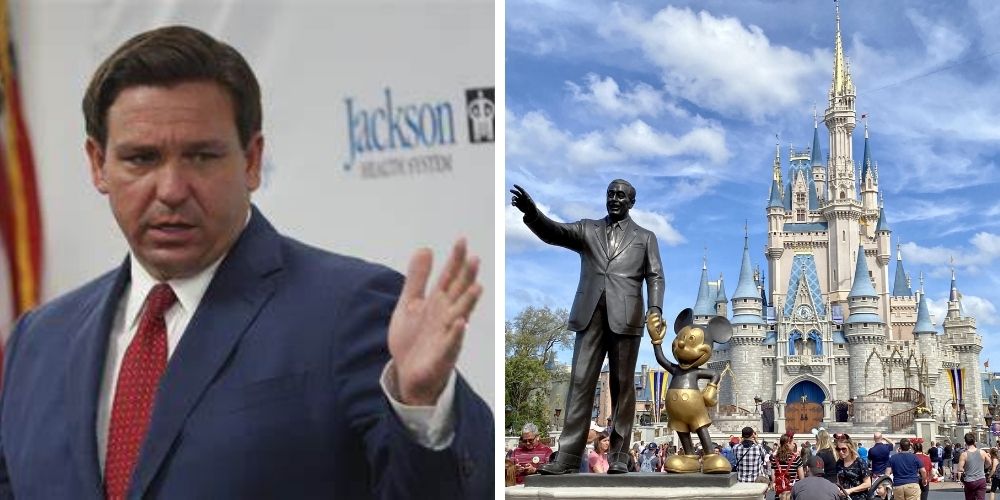 On Thursday, Florida Republican Governor Ron DeSantis suggested that he would be supportive to the suggestion of repealing a 55-year-old state law that allows Disney to govern itself on the grounds of Walt Disney World, following the company's public opposition to the recently signed parental rights law in the state.

During a press conference in West Palm Beach DeSantis said, "What I would say as a matter of first principle is I don't support special privileges in law just because a company is powerful and they've been able to wield a lot of power."

This followed State Rep. Spencer Roach tweeting Wednesday morning: "Yesterday was the 2nd meeting in a week w/fellow legislators to discuss a repeal of the 1967 Reedy Creek Improvement Act, which allows Disney to act as its own government. If Disney wants to embrace woke ideology, it seems fitting that they should be regulated by Orange County."

Disney has been verbally sparring with Republicans in the state regarding the bill, which prohibits classroom instruction on "sexual orientation" and "gender identity" in third grade or younger "or in a manner that is not age-appropriate or developmentally appropriate for students in accordance with state standards."

After DeSantis signed the legislation Monday, Disney released a statement slamming the bill. "Florida's HB 1557, also known as the 'Don't Say Gay' bill, should never have passed and should never have been signed into law. Our goal as a company is for this law to be repealed by the legislature or struck down in the courts, and we remain committed to supporting the national and state organizations working to achieve that. We are dedicated to standing up for the rights and safety of LGBTQ+ members of the Disney family, as well as the LGBTQ+ community in Florida and across the country," the company wrote.

DeSantis responded by stating that the company had "crossed the line."

Referencing a bill designed to rein in Big Tech that Republicans were working through the legislature last year, when Disney added a "carve out" at the "11th hour" for theme parks, DeSantis added during the presser: "I'm thinking to myself, 'This is ridiculous.' Honestly, it was embarrassing."

DeSantis continued, "I think what has happened is there's a lot of these special privileges that are not justifiable, but because Disney had held so much sway, they were able to sustain a lot of special treatment over the years."

The governor added that Disney has "lost a lot of the pull that they used to have" following the company's reaction to the parental rights law and said he thinks that’s a "good thing for our state because the state should be governed by the best interest of the people."

"I would say any special privileges that are in law I would like to get rid of generally. I think in this particular case with Disney, I just don't think you have very many people in the legislature anymore who are going to be able to defend a lot of what has been done over many years to really have them almost govern themselves in some of these things. That was probably never appropriate to start, but is certainly not appropriate now at this point," DeSantis stated.

"This state is governed by the interest of the people of the state of Florida. It is not based on the demands of California corporate executives," DeSantis said. "They do not run this state. They do not control this state."

The results of a recent survey show that the majority of Americans, when shown the legislation's explicit text, agree with Florida's recently approved law that's been mislabeled the "Don't Say Gay" bill by left-wing activist critics.

In mid-March, several Disney employees were busted in a massive child trafficking sting, just days after the corporation spoke out against Florida's legislation.

A Disney executive producer indicated during a company call that she is proud of implementing a "not-so-secret gay agenda" into projects involving children's programming. During the meeting, Disney corporate president Karey Burke revealed she's a mother of two queer children: "one transgender child and one pansexual child." The executive of the children's entertainment entity also pushed for LGBTQIA and racial minority representation among Disney characters.