The photo shows “at least seven” members of the Manitoba NDP, including leader Wab Kinew, the official Leader of the Opposition, posing alongside the flag of the former Soviet Union. 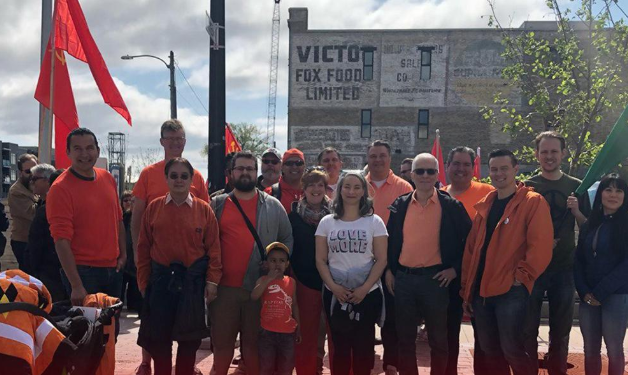 A photo posted onto the PC Party of Manitoba’s Facebook page has garnered some attention, thanks in part to some of the imagery involved in the photo.

The photo shows “at least seven” members of the Manitoba NDP, including leader Wab Kinew, the official Leader of the Opposition, posing alongside the flag of the former Soviet Union.

The PCs state that the photo is “grossly offensive to Ukrainian Manitobans and all those who suffered under the Soviet regime.” This referencing the millions of lives lost in the Holodomor.

According to the Canadian 2016 census, there are approximately 1.3 million Ukrainian-Canadians, with just under 100,000 living in Winnipeg alone.

The photo was believed to have taken place at an event partly commemorating the 100 year anniversary of the 1919 Winnipeg general strike, one of the most famous and influential strikes in Canadian history. For six weeks, May 15 to June 26, more than 30,000 strikers brought economic activity to a standstill in Winnipeg, Manitoba, which at the time was Canada’s third largest city.

What do you think? Is it appropriate for the leader of the province’s Opposition to pose with a Soviet flag? Or is this a non-issue? Let us know in the comments below.