That this doctor is using social media as a way to find patients and remove their healthy breasts does not seem to be a problem for The New York Times, rather they appear to endorse it and praise her acumen at finding this unique marketing strategy for her surgical practice. 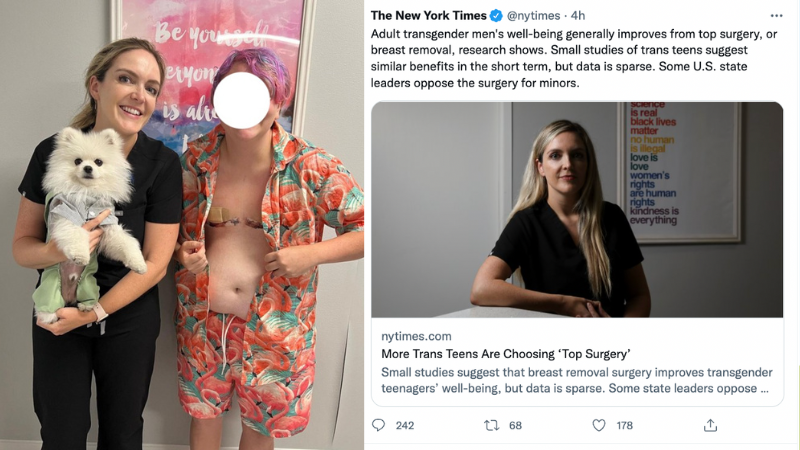 Mia Ashton Montreal QC
Sep 26, 2022 minute read
ADVERTISEMENT
ADVERTISEMENT
“More Teens are Choosing ‘Top Surgery’,” announces the headline of an article published in The New York Times on Monday, which also features a photograph of Dr. Sidhbh Gallagher, the Miami surgeon who refers to performing bilateral mastectomies on girls and young women who believe themselves to be men with the catchy phrase "yeet the teets."

Dr. Gallagher, the article notes, has taken the unusual approach of embracing social media platforms such as TikTok to promote her services to impressionable teenage minds, which has made her something of a celebrity in the world of medical professionals who chop healthy body parts off distressed teens and young adults. She performed 13 top surgeries on minors last year, up from a handful a few years ago.

Gallagher frequently posts photographs and memes on TikTok, Facebook, and Instagram as a way to connect with hundreds of thousands of followers, with her signature catchphrase "yeet the teets." Satisfied customers will often flood her feed with photos tagged with #NipRevealFriday, in which they share photographs of their newly unbandaged chests bearing fresh mastectomy scars. She says most of her patients, both teenage and adult, found her via TikTok.

That this doctor is using social media as a way to find patients and remove their healthy breasts does not seem to be a problem for The New York Times, rather they appear to endorse it and praise her acumen at finding this unique marketing strategy for her surgical practice.

"As demand has grown, Dr. Gallagher, the surgeon in Miami, has built a thriving top surgery specialty. The doctor frequently posts photos, FAQs and memes on Facebook, Instagram and TikTok, proudly flouting professional mores in favor of connecting with hundreds of thousands of followers," The New York Times writes.

Dr. Gallagher told The New York Times she performed top surgeries on about 40 patients a month, and roughly one or two of them are under 18. Younger patients are usually at least 15, though she has operated on one 13-year-old and one 14-year-old, she said, both of whom had extreme distress about their chests.

Some photographs of her satisfied customers show disturbing signs of past self-harm.

This reporting comes after many outlets claimed that medicalized gender transition was not being implemented on children. Now, apparently, not only is it defintely happening per The New York Times, but it's a good thing. Not only is the removal of healthy breasts happening, but castrations and hysterectomies are happening as well.

The New York Times reports that adult females generally benefit from having their healthy breasts cut off, per research, and that this major surgery somehow "relieves body-related distress, increases sexual satisfaction, and improves overall quality of life."

The source for this claim is a study conducted by Dr Joanna Olsen-Kennedy, who believes girls as young as 13 should be eligible for bilateral mastectomies and once flippantly quipped that if these teens want breasts at a later point in life, they can "go and get them."

However, it is also noted that “the study had caveats: Most patients were surveyed less than two years after their surgeries, and nearly 30 percent could not be contacted or declined to participate.”

A survey of detransitioners done in 2021 found that only 24 percent had told their clinicians that they had detransitioned.

Apparently, a few small studies of adolescents girls who believe themselves to be boys suggest similar short term benefits. Here, small means a study group of 14 individuals and the short term means, it would appear, approximately 90 days post-surgery.

The article touches on the fact that over the past decade there has been a huge surge in the number of young people showing up at gender clinics, but falls short of analyzing why that might be the case. No mention of the peer contagion element reported by Abigail Shrier in her book Irreversible Damage, nor of the rising rates of detransiton.
ADVERTISEMENT
ADVERTISEMENT
yeet the times