Noah Carl fights back after dismissal from Cambridge

Carl says a possible way forward to increase viewpoint diversity may involve online universities, which Jordan Peterson has advocated, or withholding public funding for universities that refuse to comply with free speech. 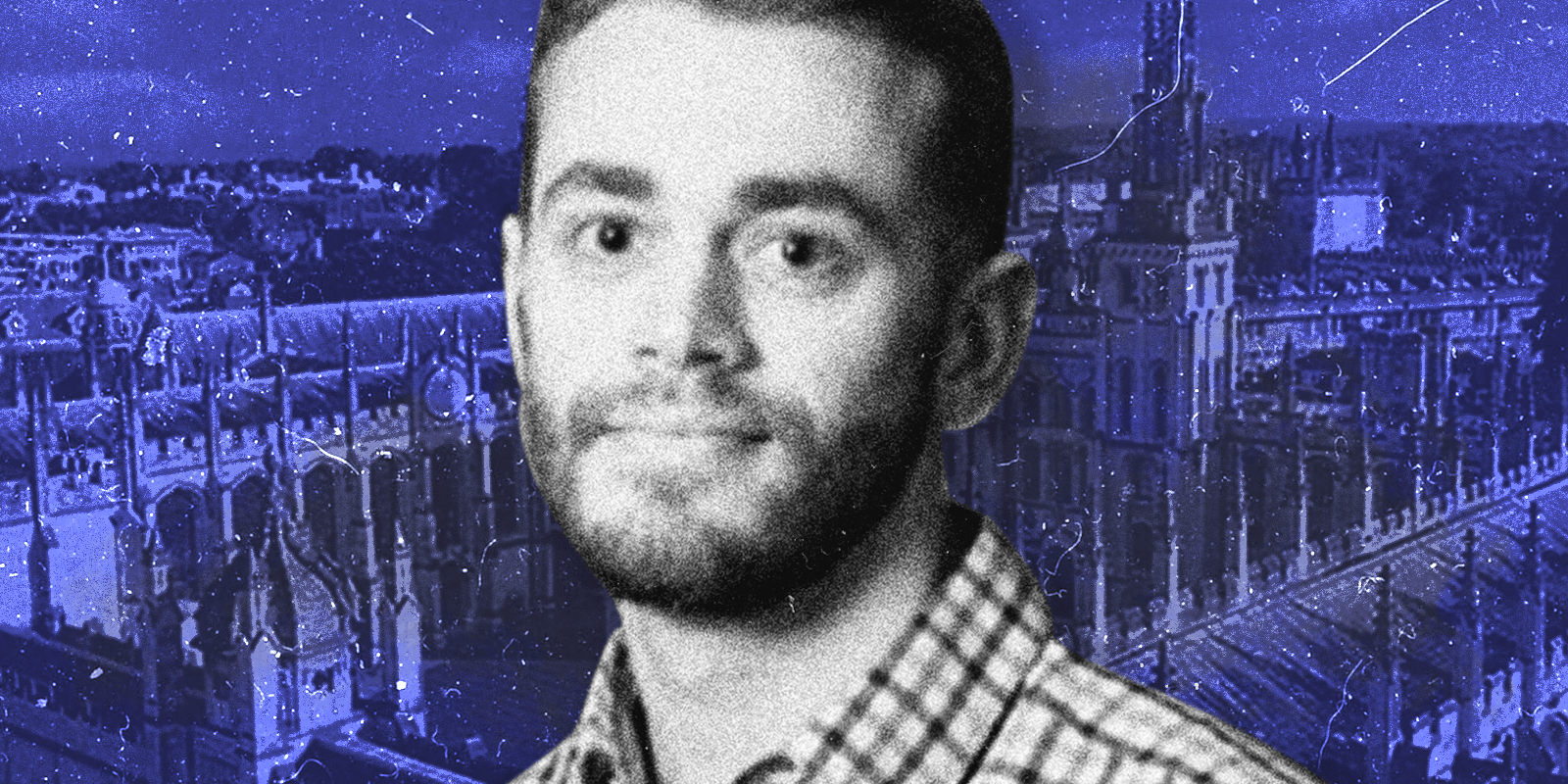 Dr. Noah Carl is a young, conservative academic whose existence was relatively anonymous before he became the target of the illiberal intelligentsia and later lost his research position at Cambridge University. Now, he’s over halfway to his crowdfunding target to take the university to task for its cowardly dismissal.

Last November, Carl was chosen out of 943 candidates for the prestigious Toby Jackman Newton Trust Research Fellowship at St Edmunds College, part of Cambridge University. Carl, who grew up in idyllic Cambridge in an academic family—both his parents are architectural scholars—lost his position in May, after 1,400 academics denounced his views and his work in a letter published a few months ago: “A careful consideration of Carl’s published work and public stance on various issues, particularly on the claimed relationship between ‘race,’ ‘criminality’ and ‘genetic intelligence’, leads us to conclude that his work is ethically suspect and methodologically flawed.”

We are deeply concerned that racist pseudoscience is being legitimised through association with the University of Cambridge. This fellowship was awarded to Carl despite his attendance at, and public defence of, the discredited ‘London Conference on Intelligence’, where racist and pseudoscientific work has been regularly presented. Carl’s work has already been used by extremist and far-right media outlets with the aim of stoking xenophobic anti-immigrant rhetoric. In a context where the far-right is on the rise across the world, this kind of pseudoscientific racism runs the serious risk of being used to justify policies that directly harm vulnerable populations.

These alarmist claims could easily be refuted, and were, both by Carl in this FAQ and by several notable academics, like Cass R. Sunstein and Jonathan Haidt, who wrote in a piece by Quillette that  “the “open letter” denouncing Carl is just a list of vague assertions and charges of guilt by association. If the signers think we should condemn anyone who gives ammunition to “extremist and far right media,” they should write a new letter condemning themselves.”

Reading the letter, you would be forgiven to think that Carl must hold suspect views on race and that his work furthers a racist agenda. But his “crimes” weren’t nearly as sinister, although he has studied links between population groups and crime, as in this paper on how British stereotypes of different groups of immigrants correlate to the types of crimes they commit. He has also defended the right of academics to research the correlation between IQ and different population groups, but not partaken in this type of research himself.

After an investigation by the college and months of protests, Carl, who has a PhD in Sociology, was dismissed on May 1:

The poor scholarship of this problematic body of Dr Carl’s work, among other things, meant that it fell outside any protection that might otherwise be claimed for academic freedom of speech. The panel found that, in the course of pursuing this problematic work, Dr Carl had collaborated with a number of individuals who were known to hold extremist views. There was a serious risk that Dr Carl’s appointment could lead, directly or indirectly, to the College being used as a platform to promote views that could incite racial or religious hatred, and bring the College into disrepute.

This cowardly stance, full of virtue-signalling buzzwords and accusations of guilt by association, shows how the protection of the perceived status of the college takes precedence over what a university is meant to foster, namely knowledge and truth. Knowledge isn’t racist; it’s neutral. It’s not up to the academic to decide how that knowledge will be used, but simply to offer his or her research. If there is a correlation between crime and different population groups, surely that knowledge deserves to be taken seriously, rather than swept under the carpet? Ignoring facts doesn’t solve anything. Just look to Sweden, where a crime wave—including numerous explosions, no less – among certain parts of the immigrant population has become an open secret, yet is still dismissed by the left, to see where going down that road will take us.

How did thought control and condemnation of wrongthinkers, rather than open inquiry and respect for different viewpoints, become an obsession for academics in the humanities departments? By now, we’re almost becoming used to countless deplatformings of speakers and rescindments of scholars, such as the appalling treatment of Dr Jordan B. Peterson only a few months ago. The left wing types dominate the social sciences, a trend which started in the 1960s, as Carl himself has pointed out—less than 12% of academics lean right in British universities, compared with 50% of the population— and with the increasingly polarized public debate, their authoritarian streak is becoming more obvious. “There is no such thing as free speech” is the excuse they espouse, but they forget conveniently that THEY are very free to hound whomever THEY disagree with, and THEIR views—those of the liberal elite, who preach for open borders, endless genders, and all the other politically correct causes—are usually met with acclaim. Whereas conservative views – such as being a Brexiter, like Carl—are mocked and vilified.

“This isn’t about whether you agree with my research or my political views,'” Carl told Toby Young in an interview for the Spectator. “This is about protecting freedom of speech, and standing up to the activists who are trying to control our universities. (…) Let’s show St Edmund’s College that they can’t get away with this.’

Carl told me in an email that he hopes to continue to publish scientific articles and will continue to read around in the literature. His advice to young academics is to apply to an institution that has a reputation for upholding free speech and open inquiry. “So far as the UK is concerned, Oxford has shown itself to be much better in this regard than Cambridge. In the US, I understand that Chicago has a good track-record,” says Carl. His best advice? “Never apologize for anything unless you genuinely believe you did wrong.”

Carl says a possible way forward to increase viewpoint diversity may involve online universities, which Jordan Peterson has advocated, or withholding public funding for universities that refuse to comply with free speech. It could also involve collective defense agreements to preempt attacks by activists, he added.

I don’t think that even as recent as five or ten years ago we could have predicted, with any gravitas, that freedom of speech would come under attack in our liberal democracies. In Britain, as in the rest of the modern world, free thought and the expression of it has resulted in countless advances in science and culture, and ever since John Stuart Mill defended freedom of speech in On Liberty in 1859:

In this age, the mere example of non-conformity, the mere refusal to bend the knee to custom, is itself a service. Precisely because the tyranny of opinion is such as to make eccentricity a reproach, it is desirable, in order to break through that tyranny, that people should be eccentric. Eccentricity has always abounded when and where strength of character has abounded; and the amount of eccentricity in a society has generally been proportional to the amount of genius, mental vigor, and moral courage which it contained. That so few now dare to be eccentric, marks the chief danger of the time.

This has echoed in every generation since. We have all tended to agree that silencing opinion is wrong, regardless of the opinion’s truthfulness, because when truth collides with error, knowledge arises. This “marketplace of ideas” has been a long standing pillar on which our society is built. When it crumbles, we’re in trouble. And more and more evidence is piling up pointing to this fundamental value being eroded, bit by bit. It is dissidents like Carl who are the heroes in this climate of coercion. I, for one, support Carl in his quest for justice and wish him a fulfilling and interesting career in the years to come.