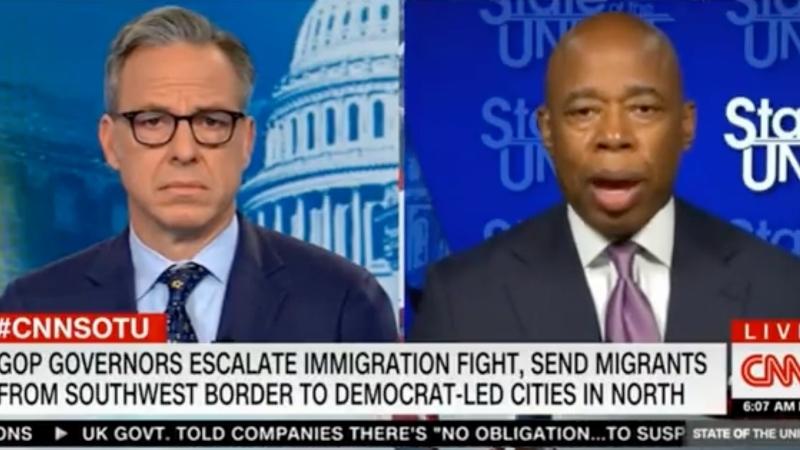 Olivia Rondeau
Sep 21, 2022 minute read
ADVERTISEMENT
ADVERTISEMENT
The progressive mayor of New York City, Eric Adams, has been struggling with managing the recent influx of illegal aliens pouring into his sanctuary city by way of Texas. Since early August, TX Governor Greg Abbott has bussed thousands of border-crossers to NYC, joining Florida governor and fellow Republican Ron DeSantis in sending migrants to blue cities, prompting Adams to accuse the conservative governors of using this as a distraction to hide "​​the erosion of basic human rights."

In a Sunday appearance on CNN with host Jake Tapper, Adams called on the Biden Administration for help dealing with the migrant crisis which has overwhelmed NYC's shelter system, and denounced DeSantis' and Abbott's actions.

"Well, we should be clear that this is, as you stated, a humanitarian crisis created by human hands," the mayor said to Tapper when asked about the help he needs. "It is an all-hands-on-deck moment, where we're all supposed to come together and coordinate. Coordination during a crisis is something that we must do together. And that's the federal government, that is also the governor of the state of Texas as well as the governor of the state of Florida. We should not be really treating other cities and municipalities in the manner we're witnessing now"

"We need resources for housing, resources to make sure that we can properly give people medical care, all of the basic necessities that you would give new arrivals that enter a city," he continued.

NYC law requires the city to provide housing for anyone who requests it, which has proven difficult to manage with 9,800 asylum seekers entering the shelter system since arriving from Texas, according to FOX5. The city has been unable to comply with the law in light of the illegal population increase.

"These are two governors who are hiding up some of the actions they've done around gun control, which is really proliferating our country with guns. It's what they did with the women's right to choose," Adams said to Tapper. "You see, this is their way of covering up what many people have been really concerned about the erosion of basic human rights."

He also called for the Biden administration to enact immigration reform, saying that he "made great conversations with the White House, as well as Sen. Schumer, Sen. Gilibrand, and other lawmakers to discuss the issue," and suggested lessening the restrictions on illegal migrants holding jobs.