With under a week to go for the Portland mayoral race, it's been revealed that the Antifa candidate challenging Mayor Ted Wheeler once tweeted in support of a 2016 primary ballot that voted for historical communist dictators among other extremists as write-ins. 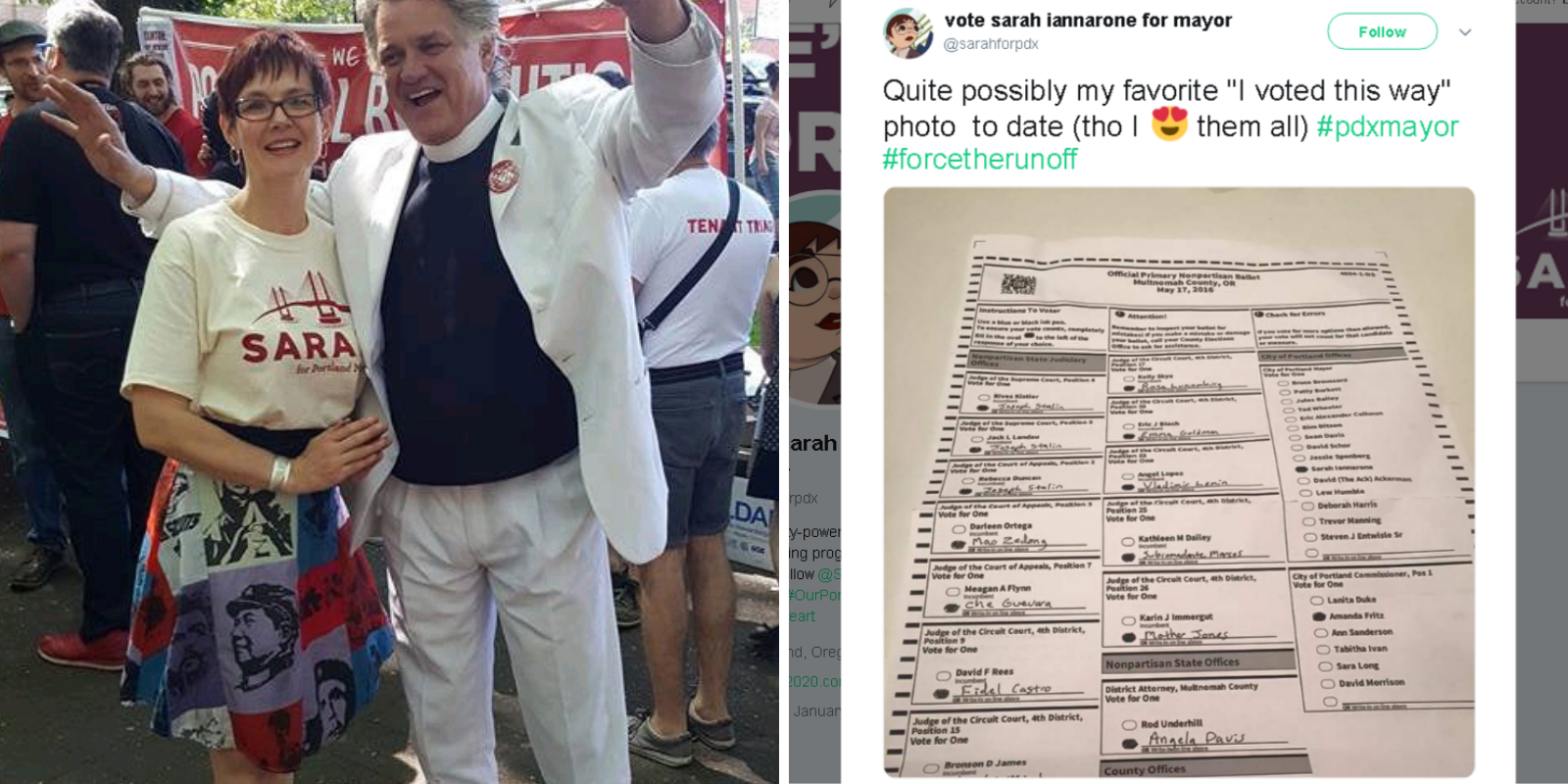 With under a week to go for the Portland mayoral race, it's been revealed that the Antifa candidate challenging Mayor Ted Wheeler once tweeted in support of a 2016 primary ballot that voted for historical communist dictators among other extremists as write-ins.

The photo is not of her own ballot, but the ballot of a supporter, Iannarone campaign manager Gregory McKelvey told KOIN 6 News. Iannarone, he said, “posted the ballots of many of her supporters who sent them in after voting for her.”

"Quite possibly my favorite 'I voted this way' photo  to date (tho I [heart] them all)," Iannarone wrote in her tweet. The picture included a filled-in bubble beside her name on the Multnomah County official nonpartisan ballot.

McKelvey added that Iannarone also shared a picture in 2016 of someone else’s ballot "celebrating Black women like Angela Davis and Assata Shakur.”

Davis is a far-left militant activist who gained international notoriety for her acquittal of kidnapping, murder, and conspiracy charges in the 1970s. A decade later, she ran for vice president on the unsuccessful Communist Party ticket.

Shakur is a convicted first-degree accomplice killer of a New Jersey state trooper. The former Black Liberation Army member escaped from prison and was added to the Federal Bureau of Investigation’s Most Wanted Terrorists list.

Wheeler campaign manager Danny O’Halloran told KOIN 6 News that "it doesn’t really matter" if that’s her ballot or not.

“No one who saw that tweet would have any way of thinking that (it wasn’t her ballot),” O’Halloran stated. “But more importantly it doesn’t really matter. On that ballot is a vote for Sarah Iannarone and everyone else written in was a Communist dictator. And her choosing to post that is just as inflammatory and mocks our democratic institutions in just the same way.”

The post, he continued, “fits a pattern of constant inciteful rhetoric by Sarah Iannarone and her campaign." O'Halloran cited the mayoral contender's repeated affiliation with Antifa, choosing to wear Mao Zedong-inspired clothing, and refusing to condemn violent protests during interviews.

Earlier this month, at the first televised mayoral debate hosted by The Oregonian, Iannarone regurgitated the Biden-propagated phrase, "Antifa is not anything more than an idea."

"She’s on the record saying sometimes nonviolent demonstration doesn’t go far enough,” Wheeler pressed in a subsequent virtual face-off. Iannarone fired back, clarifying that "all violence is wrong, no matter who does it" and that "one of the reasons we see protesters coming back night after night is because the current mayor fails to denounce police violence.”

McKelvey declined an on-camera interview request from KOIN 6 News for him or Iannarone, but he issued the following statement:

“Ted Wheeler is using the same tactics as Donald Trump to scare and confuse voters. The claim is simply a lie. Trump and Wheeler paint progressive women as too radical because they believe misogyny and misrepresentations can still win elections. They are tired tricks from a time that our city and nation are eager to move past."

McKelvey then alleged that Wheeler’s ideas are "straight out of the McCarthy era," noting "degradation of the climate," housing segregation, police brutality, and Red Scares. "Portland deserves a conversation surrounding our housing crisis and economic recovery, not the daily distortions, alt-right attacks, and Red Scares of Wheeler’s desperate reelection campaign."

Iannarone initially led by double digits according to a survey of likely voters, but an Oregon Public Broadcasting-DHM Research poll from several weeks ago showed Wheeler virtually tied with his opponent. However, 28 percent of the voters remained undecided at the time of publication.

After earning third place in the Portland mayoral election four years ago, Iannarone continues to position herself as the progressive alternative while Wheeler seeks his second term.

This comes after Hardesty and Wheeler have publicly clashed this year over control of the Portland police. She has repeatedly asked the incumbent, also the city’s current police commissioner, for authority over the bureau.

Late Thursday, Sanders updated his list of “progressive, down-ballot candidates” to include Iannarone. "In every corner of the country, strong progressives are running at the state and local level to represent our movement and lead the fight to transform this country. These races are incredibly important — that’s why I am endorsing progressive, down-ballot candidates across the country. If you can, I hope you’ll cast your ballot for them when you vote," Sanders wrote on Medium.

Iannarone thanked the Vermont senator, emphasizing that she's "excited to work on behalf of the 99% to hold big corporations accountable and to fight for health care for all Portlanders and everyone across the country."