"Just as we provide asylum for political prisoners, we should do the same for truckers who have been subjected to violence, had their property confiscated, and their bank accounts frozen by a government that is quickly becoming the embarrassment of the free world." 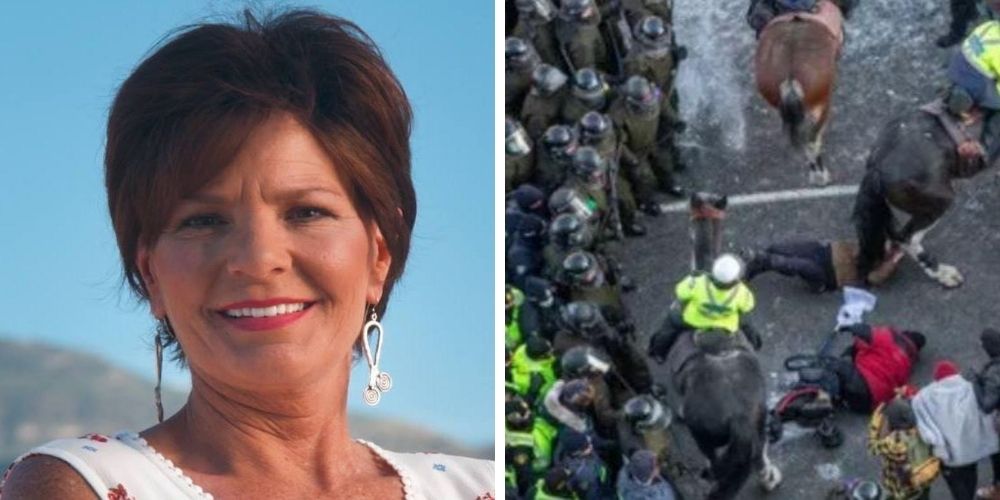 In a Twitter thread, Harrell wrote Saturday: "Justin Trudeau's heavy-handed crackdown against peaceful protesters in Canada is not the action of a Western Democracy, but that of an authoritarian regime like Venezuela." She also shared a Tucker Carlson segment describing Trudeau's actions against the protesters.

"Just as we provide asylum for political prisoners, we should do the same for truckers who have been subjected to violence, had their property confiscated, and their bank accounts frozen by a government that is quickly becoming the embarrassment of the free world," Herrell commented in another tweet.

"I am introducing legislation that would temporarily grant asylum to innocent Canadian protesters who are being persecuted by their own government. We cannot be silent as our neighbors to the north are treated so badly," she vowed.

Law enforcement in Ottawa had turned physical towards the Freedom Convoy protesters Saturday, using batons against the demonstators and even injuring a Rebel News reporter during the melee. The chaotic scene over the weekend followed the trampling of an elderly woman by mounted police Friday.

Earlier in the week, Trudeau had invoked the Emergencies Act to clamp down on the pro-freedom protests, despite the weeks-long Freedom Convoy being largely peaceful since its conception. Premiers of four provinces have since voiced opposition to Trudeau's move attempting to quell the demonstrations.

Herrell's announcement came on the heels of a poll released by Rasmussen Reports that found a majority of Americans support the freedom protesters and believe that a similar movement south of the border would be "a good idea."

Rasmussen Reports found that 59 percent of respondents support the Freedom Convoy, including 42 percent who "strongly support" its existence.