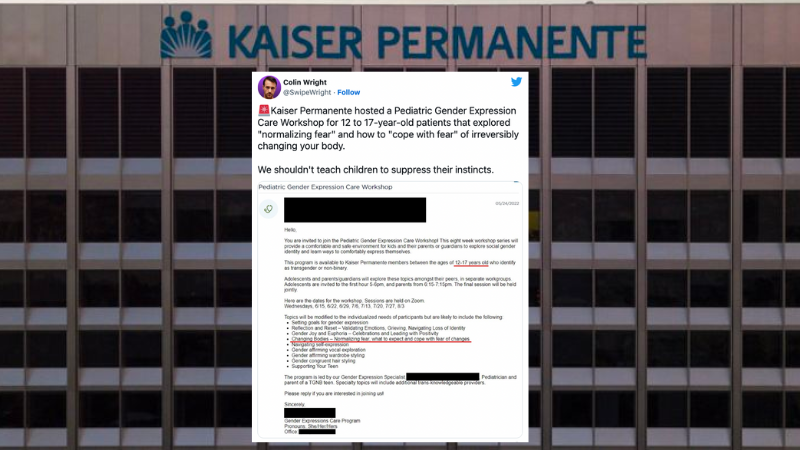 On Monday, it was revealed that health care company Kaiser Permanente held multiple Pediatric Gender Expression Care workshops over the summers with topics ranging from managing fear of changes, to outward expressions of gender identity.

The workshop, which was brought to light by evolutionary biological Colin Wright on Twitter, was held virtually over the summer with eight sessions out over June, July, and August.

An email, obtained by Wright, outlined the eight week workshop series, stated that it "will provide a comfortable and safe environment for kids and their parents or guardians to explore social gender identity and learn ways to comfortably express themselves."

The workshop was open to Kaiser Permanent members between the ages of 12-17 who identify as transgender or non-binary. Sessions were held separately from parents, with adolescents attending the first hour and parents attending the second hour. The final session, held on August 3, was held jointly.

The email includes a number of topics likely to be covered in the sessions, with the email noting that topics may be "modified to the individual needs of participants."

The clinic’s website links to the World Professional Association for Transgender Health (WPATH). It was recently revealed that an early draft of the group’s 8th edition of their Standards of Care lowered their minimum age recommendations for children to start receiving surgical gender transitions.

The age for cross sex hormones has been lowered from 16 to 14. The age for double mastectomies has dropped to 15. For those seeking breast augmentation for facial surgeries, the lower age limit is now 16. Teens have to be 17 to receive genital surgeries like vaginoplasties and hysterectomies.

Teens have to be 18 to receive phalloplasties, unless "there are significant, compelling reasons to take an individualized approach."