"The Biden Administration needs to listen to Americans & increase domestic energy instead of relying on authoritarian regimes to fuel our country," Gov. DeSantis said. 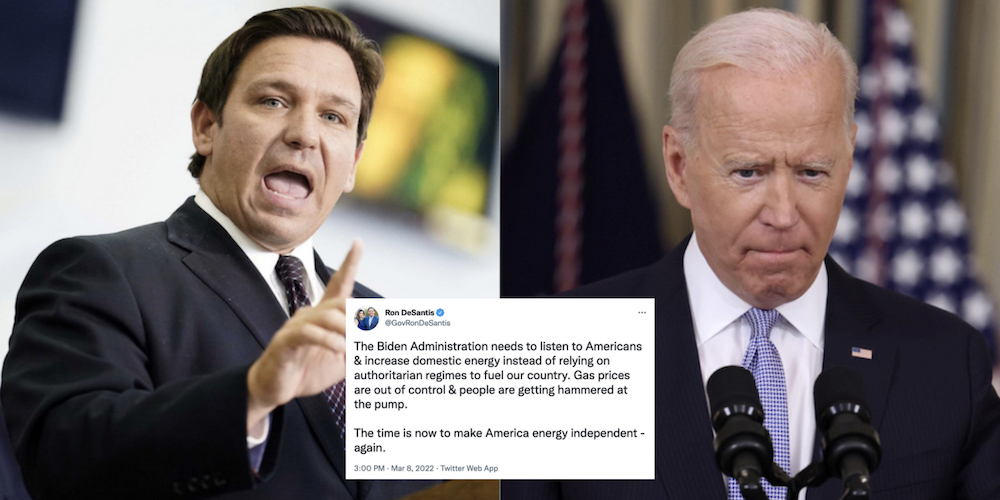 Amid rising geopolitical tensions, Florida Governor Ron DeSantis is urging the federal government to make America energy independent by increasing domestic production. Across the country, gas prices have been on the rise, putting a strain on the wallets and wellbeing of everyday Americans.

"The Biden Administration needs to listen to Americans & increase domestic energy instead of relying on authoritarian regimes to fuel our country," Gov. DeSantis said. "Gas prices are out of control & people are getting hammered at the pump. The time is now to make America energy independent - again."

The response from politicians has been mixed, with some suggesting consumers change their habits and others calling for investments in alternate sources of energy. For some, including Florida governor Ron DeSantis, the solution lies in making America energy independent.

While both Gov. DeSantis and the Biden administration agree that the US should wean itself off foreign oil, where the latter differs is that they want Americans to reduce their dependence on oil in general.

Kamala Harris and Pete Buttigieg even suggested that Americans should just buy an electric vehicle if they're so upset about the rising gas prices, which the administration blames not on lack of domestic production, but on Putin and oil companies.

To its credit, the Biden administration did announce that it would ban imports of Russian oil and coal.

In a recent interview, energy secretary Jennifer Granholm claimed that the US did not import coal from Russia, a statement that was debunked by the administration itself.