Following an announcement Saturday that Seattle Police would be coordinating with the city attorney to enact a strict new policies to arrest and prosecute protesters who destroy property City Attorney Pete Holmes says "he has no interest in charging peaceful protesters." 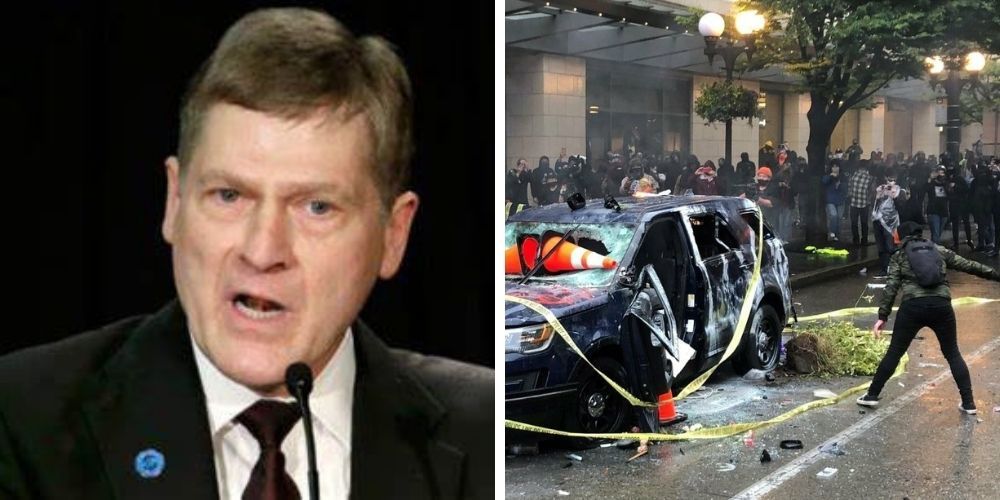 Following the Antifa and BLM riot in Seattle on inuaguration night, interim police Chief Adrian Diaz announced Saturday that his department would be coordinating with the city attorney to enact a strict new policy to arrest and prosecute protesters who destroy property during street demonstrations.

Following the riots in Seattle in the wake of the death of George Floyd, where rioters vandalized buildings and torched police cars, Holmes said he would not be prosecuting the offenders.

"After two weeks of anguished demonstrations over the murder of George Floyd and the killing of other unarmed black men by police, it is plain to me that peaceful protestors should not be prosecuted despite having been arrested during events that have sometimes devolved into violent and destructive confrontations with Seattle police and supporting law enforcement agencies."

Holmes was under fire for not prosecuting crimes long before violent rioting, looting and protests rocked Seattle. Seattle and King County have a track record of releasing violent Antifa activists. In 2019 business groups in Seattle commissioned a report on 100 prolific offenders who were terrorizing downtown Seattle residents and businesses who cycle through Seattle’s revolving door justice system.

The situation in Seattle is about to get worse. Aside from the ongoing unrest, The Seattle City Council is introducing legislation to "excuse and dismiss" almost all misdemeanor crimes committed in Seattle by "persons with symptoms of addiction or mental disorder." Additionally, this legislation would apply to a person who committed a crime because they needed "...to meet a basic need to survive." A jury would hear a defendant's explanations for the crime and for the jurors to decide if the crime was committed to "...supply a basic need."

The legislation would also allow for the reselling of stolen goods to raise money to pay for a "basic need."

If approved, the ordinance would excuse and dismiss, and thereby legalize, almost all misdemeanor crimes committed in Seattle by offenders who could show, not just that the crime provided for a need, but also:

Offenses that would be covered by the legislation would include almost every crime below the level of a felony, but excludes charges of driving under the influence or domestic violence.

Holmes wrote a letter to the council supporting the legislation in October and said his staff is already doing much of what the poverty defense would provide. "I have worked to move the City Attorney's Office away from prosecuting property crimes that appeared to be committed out of survival necessity," he wrote.

Crime in Seattle has spiked over 250 percent in 2020 in the wake of the defunding of the Seattle Police Department and the policies of the City Council and the City Attorney. Homicides doubled in 2020.

King County’s legal system has the same problems. Following the inauguration night riots in Seattle, 33-year-old Justin Christopher Moore was arrested for allegedly vandalizing the original Starbucks in Pike Place market during the riot. According to the police report, though Moore confessed to officers after being read his rights he claimed that "he smashed the windows and entered the Starbucks to earn the trust of the others in the group."

According to Seattle radio host Jason Rantz, Judge Lisa Paglisotti released Moore without bail on his own recognizance. Rantz wrote that Paglisotti has a record of releasing dangerous criminals on their own recognizance with no bail and no time served.

During his announcement on Saturday, Diaz said that many of the 600 people arrested since the spring of 2020 have not been prosecuted. Additionally, some, like the shooters of two black teens in the 'protester' controlled ‘autonomous zone’ this summer have not even been caught yet.