As the song Soul Control by Jessie Ware plays, the performer mouths the lyrics in the child's direction, "Tell me what you wanna do. Soul control, that's how you want it." 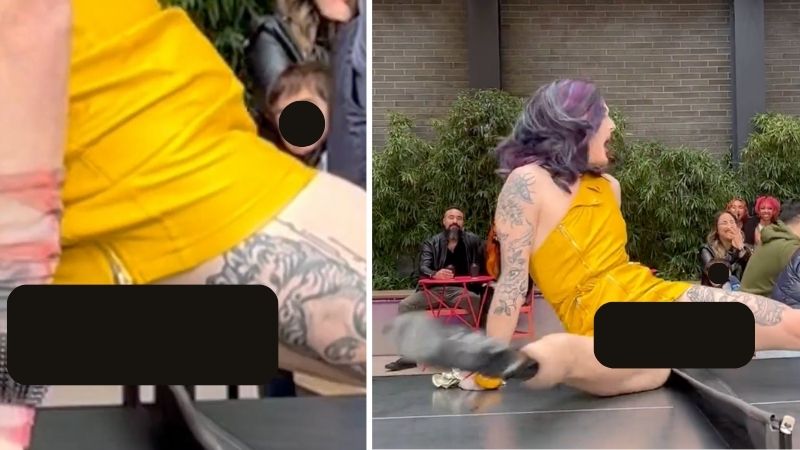 On Saturday, an "all ages" drag brunch at Moxy Austin University, a hotel and bar in Austin, Texas, hosted parents and at least one child to see drag performers gyrate, dance, and nearly expose themselves to the mostly cheering audience.

Independent journalist Tayler Hansen posted video from the event and wrote, "An 'All Ages' Drag Show took place today at Moxy Austin - University, TX. A child in attendance was exposed to male private parts and gyrating directly in front of him. This show is hosted every third Saturday of the month and is always marketed as 'All Ages'."

The footage from the event appears to show a drag performer doing the splits on a repurposed pingpong table while pulsing up and down with only a thin, skintight, stretched thong covering the performer's genitalia from onlookers' eyes. Oversized toy dice rest on the table as well.


One of the attendees, a small child only feet away from the performer, gazes for a moment before turning his face away from the spectacle. A nearby adult laughs and pets the child as he buries his face in her lap.

Later the performer dances over to the child and squats before him. As the song Soul Control by Jessie Ware plays, the performer mouths the lyrics in the child's direction, "Tell me what you wanna do. Soul control, that's how you want it."

Hansen tweeted, "I've been reporting on 'All Ages' Drag events since June, starting with the viral 'IT'S NOT GOING TO LICK ITSELF' footage from Mr Misster’s Gay Bar. There's ALWAYS a common reoccurrence at these shows. The Drag Queens perform sexual acts and intentionally engage with children."


The performer later did an inverted split, spreading legs wide and far for all to see as the small, yellow dress rode up to fully reveal the performer's barely-covered crotch and buttocks to those in attendance.

The event, called "Divacakes Drag Brunch," happens every third Saturday, from 12pm to 2pm at the location. The flier reads "all ages welcome."

The website for Moxy Austin University, also known as "MoxyYOUniversity," bills the location as "A Fun and Trendy Hotel Right in the Center of the Campus District."

The "menu" for the location has three tabs, "home," "syllabus," which is a schedule of events throughout the week that are not the drag brunch, and "drag brunch."

The drag brunch link sends visitors to an eventbrite to make reservations where the event is again billed as "Free admission, All ages welcome! Dog friendly."