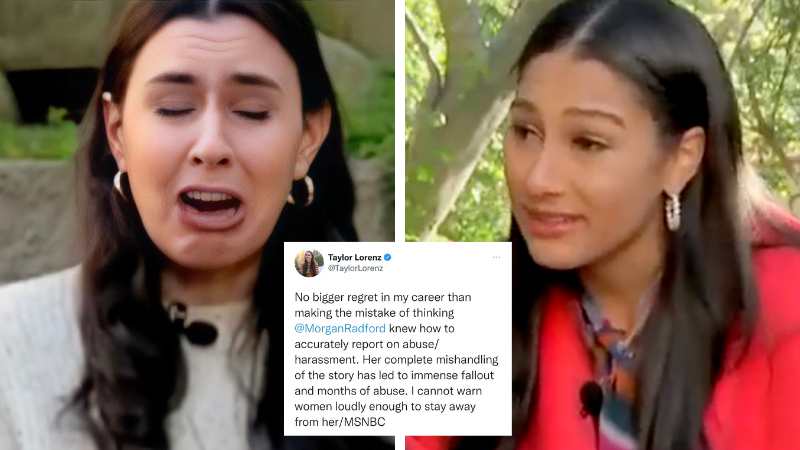 Libby Emmons Brooklyn NY
Sep 13, 2022 minute read
ADVERTISEMENT
ADVERTISEMENT
Taylor Lorenz cannot take a joke, especially when that joke is at her expense. Ever since Lorenz went on TV and cried about being on the receiving end of mean tweets, claiming online harassment has given her PTSD, she and her crying face have been the subject of endless memes and jokes.

The Washington Post reporter, who covers technology and online culture, can dish it, but she just can't take it. After the interview aired on MSNBC's Meet the Press Daily with Morgan Radford, Lorenz has gone to great lengths to get the internet to stop laughing at her for crying over mean tweets.

On Twitter, she wrote "No bigger regret in my career than making the mistake of thinking @MorganRadford knew how to accurately report on abuse/ harassment. Her complete mishandling of the story has led to immense fallout and months of abuse. I cannot warn women loudly enough to stay away from her/MSNBC."

In further tweets, she blamed Radford for throwing her "under the bus," saying "Never did I think a fellow woman journalist would throw a colleague under the bus, especially one that purports to advocate for marginalized communities. It’s a reminder that cable news will always, above all else, exploit people for cheap views. They fundamentally do not care." 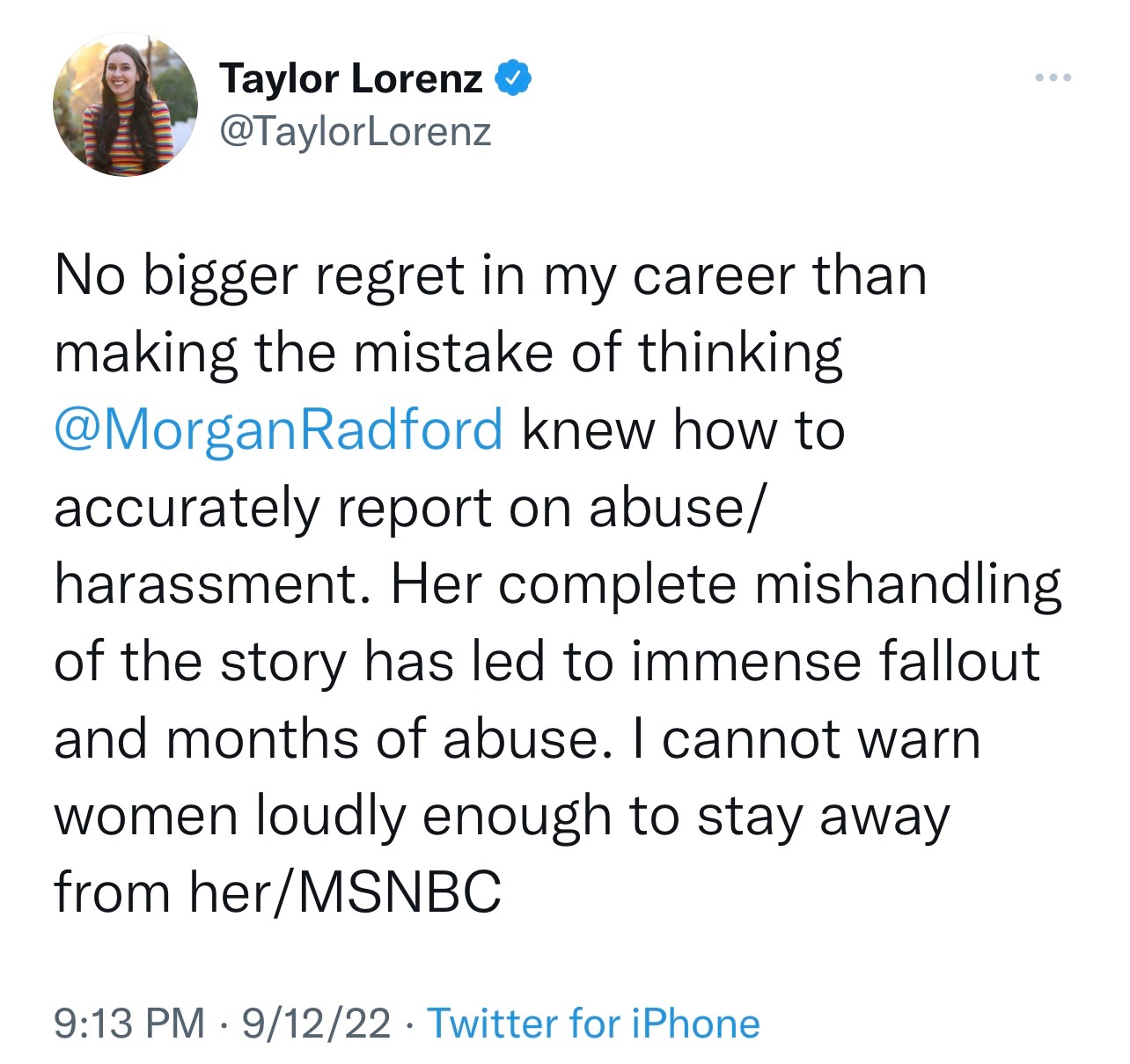 "Women journalists constantly ask me how to get their stories out," Lorenz went on, "or whether they should do interviews. All I can say is do NOT trust anyone in the media to tell your story or report on harassment accurately, especially TV news people. They do not care about u or getting it right".

"I’m so grateful to the orgs I’ve been able to work w/ to educate people on issues of online harassment & abuse. We need to change how the media tells these stories and force newsrooms to take this stuff seriously. It’s been almost a decade since gamergate, we can do better".

Lorenz was instantly the butt of jokes for having cried over mean tweets, and she instantly blamed MSNBC for having conducted the interview with her in the first place. The interview was about a study that used Lorenz as a case study to discuss the online harassment of women.

"If your segment or story on 'online harassment' leads to even worse online harassment for your subjects, you f*cked up royally and should learn how to cover these things properly," she said. Lorenz claimed she could "teach an entire class on this stuff, but the simple fact is that very few people in power in newsrooms actually understand how the modern internet and online landscape works, and so they continually give ammo to bad actors."

Less than two weeks after the interview aired, Lorenz demanded that MSNBC take it down. They did, making the video private on their YouTube channel.

It was only a little more than a week later that Lorenz would go on to dox Libs of TikTok creator Chaya Raichik, showing up at the homes of her family members seeking information about the Raichik. When Lorenz published the article exposing Raichik in the Washington Post, Raichik became the target of online harassment and threats.

Lorenz had agreed to go on the show after a study was put out by NYU's Center for Social Media and Politics and the International Women's Media Foundation, which used Lorenz as a case study for online harassment against women. The study found that criticism leveled at Lorenz by two of her primary critics, journalists Glenn Greenwald and Tucker Carlson, has resulted in "sharp increases in harmful speech" directed at Lorenz.

"I have had to remove every single social tie," Lorenz said in the interview. "I have severe PTSD from this. I contemplated suicide. It got really bad." Then she started crying.

"It's horrifying!" Lorenz responded before breaking down in tears. "It's overwhelming. It's really hard!"
ADVERTISEMENT
ADVERTISEMENT
lorenz msnbc meme