"Asking about pronouns can make trans and nonbinary students more uncomfortable because they’re forced into a situation where they either need to lie or are forced to come out when they’re not ready to." 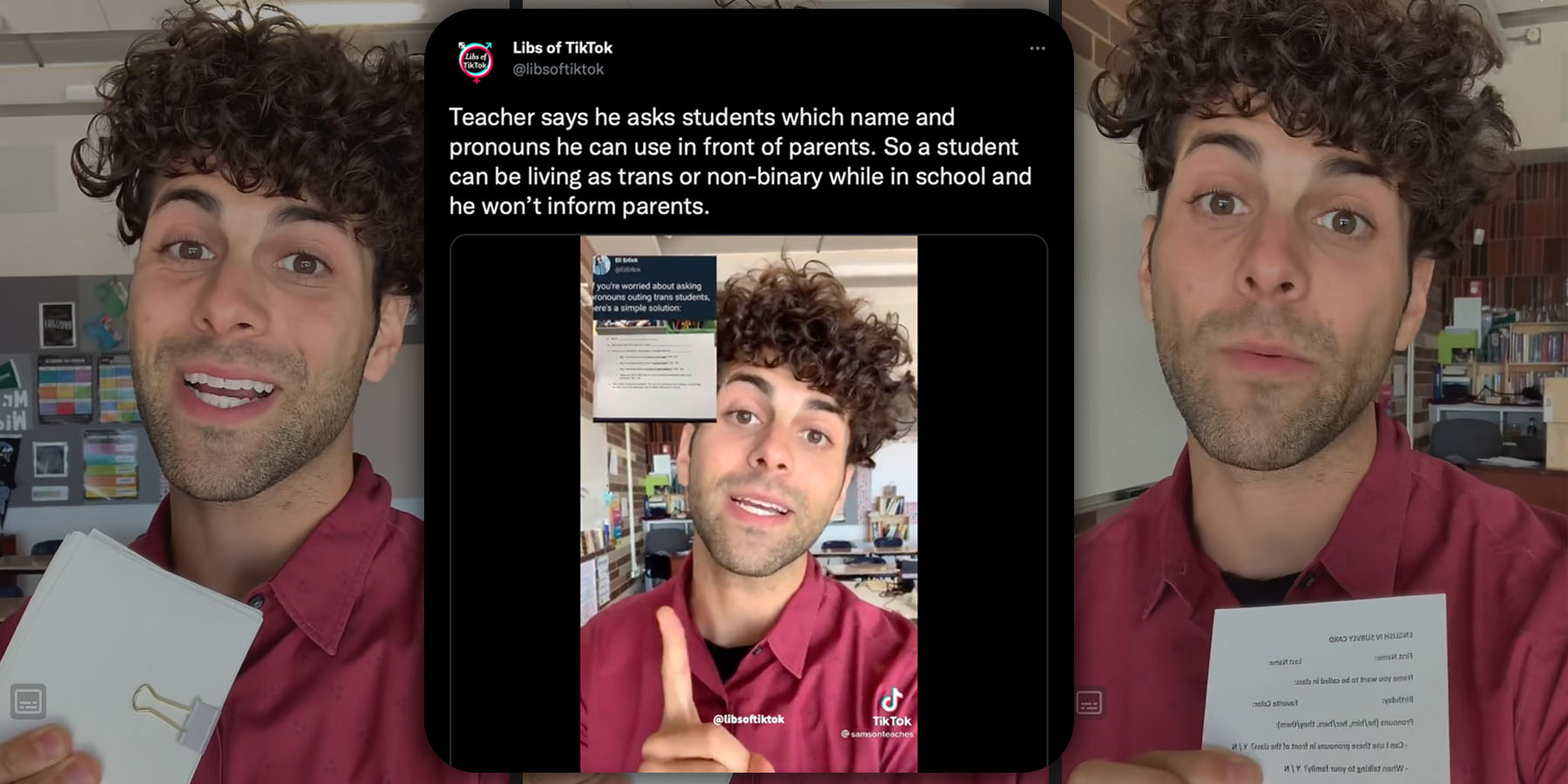 On Monday, the popular social media account Libs of TikTok shared a video of a teacher describing his preferred method of concealing kids' "transgender identities" from their parents.

The teacher uses a survey card that he hands out at the beginning of class where students can indicate what name and pronouns they want him to use and whether they want to keep their "trans identities" a secret from their families.

The teacher, Samson Widerman, describes himself on his website  as "a 12th grade English and Seminar teacher at Eric Solorio Academy High School." Widerman operates under the username "samsonteaches" across many social media platforms, but is most active on TikTok, where he has over 6.4 thousand followers. His other video content includes social justice themes, such as educational videos on the "transgender day of silence."

"Something really inspiring and also a little bit concerning I’m hearing a lot of teachers talk about is asking students their pronouns," begins Widerman when talking about the cards. "This tells me that teachers really care about their trans and nonbinary students and want to make them feel comfortable in class."

Widerman discusses an approach that he claims other teachers have tried, such as publicly asking their students to announce their pronouns to the class. But Widerman believes this can make students who aren’t ready to publicly announce their gender identities feel uncomfortable. "Unfortunately asking about pronouns can make trans and nonbinary students more uncomfortable because they’re forced into a situation where they either need to lie or are forced to come out when they’re not ready to."

There are over 70 comments on the original video, most of which are from teachers who strongly favor this method of concealing students’ secret identities from parents. Widerman ends the video by offering to send his template to other users upon request.

But not everyone believes that encouraging children to share pronouns is a good thing, as it plants the idea in children’s heads that being a girl or a boy has nothing to do with biology, and is instead all about how one feels.

In an article for The Wall Street Journal, evolutionary biologist Colin Wright said that "Pronoun rituals are extremely effective at normalizing and institutionalizing the abolition of biological sex in favor of gender identity." Wright goes on to say that "These rituals take advantage of people’s confusion and compassion to achieve compliance."