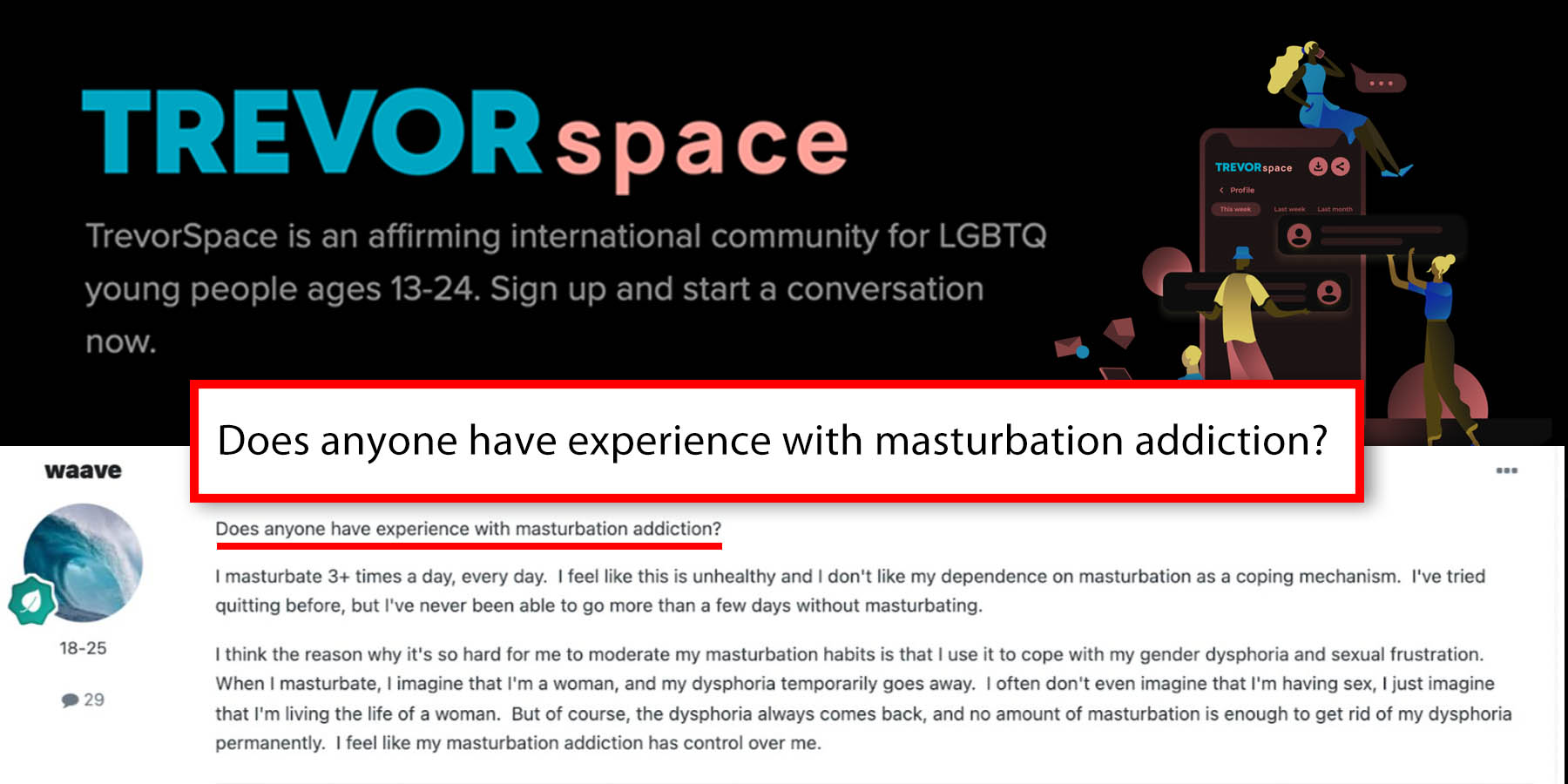 A concerned mom posing as a teen in the Trevor Project's trans youth online forum discovered inappropriate conversations occurring between adults and children.

Trevor Project, an organization that purports itself to be an LGBT youth "suicide prevention" nonprofit, operates the online community forum TrevorSpace, where adults instruct children on how to hide their transition from parents and ask them about sex.

The mother, Rachel, who comes from a Democrat background and has her own gender-dysphoric child, went undercover on TrevorSpace, and was shocked at what she found. A special report from the National Review details Rachel's findings from screenshots taken of the chats.

"She opened a 'Pandora’s box' of sexually perverse content, aggressive gender re-assignment referrals, adults encouraging minors to hide their transitions from their parents, and many troubled kids in need of psychological counseling," reports Caroline Downey of the National Review.

Rachel turned to the Trevor Project in desperation because she thought her child was in danger of taking her own life. Rachel was persuaded by a "highly credentialed" medical and mental health team to allow her daughter to socially transition, she told National Review. Her child was hospitalized several times for self-harm and suicidality. Rachel and her husband, based in Brooklyn, were told that "gender-affirmation" was their only option.

New York passed laws prohibiting "conversion therapy," essentially banning any exploratory approach to psychotherapy that tries to address underlying causes of dysphoria. They succeeded in the ban by equating "watchful waiting" with the discredited practice of trying to get gays and lesbians to "convert" to heterosexuality. Gender-affirmation care, the only legal option now for New York parents of dysphoric kids to pursue, takes kids' claims about their identity at face value without question, which often points them towards "gender affirming" medical interventions.

Rachel and her husband were at their wit's end when her husband discovered statistics that people who transition are much more likely to commit suicide than the general population. "My jaw hit the floor. I said, 'Oh my God we’ve been lied to,'" said Rachel to the National Review. Now she has dedicated her time to exposing the truth behind the "child gender-transition craze."

Signing up for TrevorSpace, users are given the option of placing themselves within the age ranges of "under 18" or "18-25." The online community forum is open to people 13-24, but there is no system in place to verify a person’s age. Rachel said she saw entries from people claiming to be over 25, including guest accounts with no listed age.

"I have been looking for a binder, but I have no clue where to get one? Does anyone know where I could get a reliable binder?” an adolescent asked on TrevorSpace.

"I really recommend TransTape," an adult user replied with a list of brands that sell binders, an undergarment meant to conceal the shape of female breasts.

"If it’s your first time I started with TomboyX compression tops," another adult wrote.

Teen girls transitioning to boys discussed Minoxidil, an over-the-counter medication that stimulates facial hair growth. "Can I get and use Minoxidil without my parents knowing?" a girl asked.

Rachel observed that members of the online forum all seemed intent on aiding each other towards taking further steps in their gender transitions. She saw a significant number of cases in which adults gave minors this validation.

"I still feel more masc and more fem on days, but it doesn’t matter what I’m feeling I will always prefer to be a girl," one child wrote. "Does that make me trans or am I still genderfluid? Help I don’t know."

An adult replied: "If I had to guess based on your post, I’d say it sounds pretty trans."

The Trevor Project, succeeds at acquiring massive support and funding by operating on the seemingly high rates of suicide among "trans" youth. But upon further investigation of these rates, researchers found them to be based on a bad interpretation of statistics.

The studies that claim trans youth are at elevated risk of suicide are commonly compared with average mentally healthy teenagers, which is deeply misleading. When researchers compared trans youth with teens suffering from similar mental health problems, there was virtually no difference in suicide rates between the groups. Trans youth are not any more suicidal than teens with garden variety mental illness, which means that failing to "affirm" a child’s transgender identity does not drive suicidal behavior.

Leor Sapir, a Fellow at the Manhattan Institute and researcher with a PhD in Political Science, calls it a "moral panic." Sapir believes that the fear-mongering with inflated statistics about trans suicide rates has been essential to activists in achieving their goals in the political arena. "The affirm-or-suicide mantra has become the central strategy of contemporary transgender activism, and at times it would seem that activists have little else in their rhetorical arsenal," said Sapir.