Trump noted that banning CRT teachings in school and workplaces is a "matter of survival" for the country, and that Americans must "lay their very lives down" to defend their country. 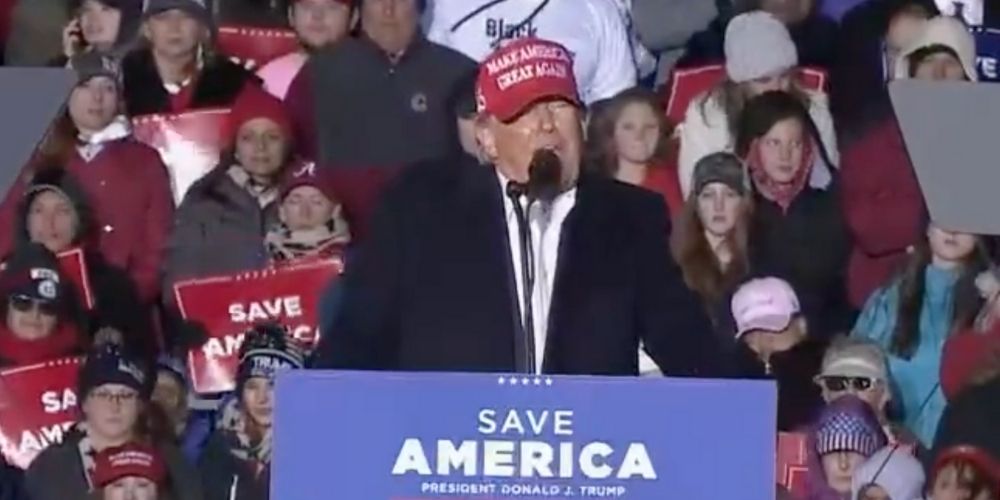 During former President Donald Trump's South Carolina rally on Saturday night, he vowed that Republicans would ban critical race theory teachings from schools nationwide if the party is able to take over Congress in the midterm elections.

Trump noted that banning the divisive far-left teachings in K-12 school and workplaces is a "matter of survival" for the country, and that Americans must "lay their very lives down" to defend their country.

"They will also defund the racist equity mandates across the entire federal government. No more illegal discrimination in everything. Getting critical race theory out of our schools is not just a matter of values. It's also a matter of national survival. We have no choice," he continued.

"The fate of any nation ultimately depends upon the willingness of its citizens to lay down, and they must do this, lay down their very lives to defend their country. If we allow the Marxists and communists and socialists to teach our children to hate America, there will be no one left to defend our flag or to protect our great country or its freedom," he added.

Critical race theory has become a hot topic across the United States in recent years, with a number of states taking legislative action against the teachings.

Florida introduced a bill that would ban state funds from going to schools that teach critical race theory, and prohibit corporations from including the teachings in employee training programs earlier this year, though that bill was withdrawn on Saturday. In Virginia, Governor Glenn Youngkin made it one of his campaign and day one actions to ban the teachings across the state.

Critical race theory became a headline issue this past fall after a letter from the National School Board Association sent a letter asking that parents across the country speaking out at local school board meetings be investigated.

The NBSA letter suggested that the PATRIOT Act be used against parents as concerned mothers and fathers speak out at school board meetings across America on critical race theory in K-12 schools and COVID-19 mandates. The letter was used by the Biden administration's Department of Justice in creating a memo that directed the FBI to aid local education officials that felt unsafe over the protests.