In an email sent on Oct. 5, NSBA Secretary-Treasurer Swett wrote that NSBA interim CEO Slaven "told the officers he was writing a letter to provide information to the White House, from a request by Secretary Cardona." 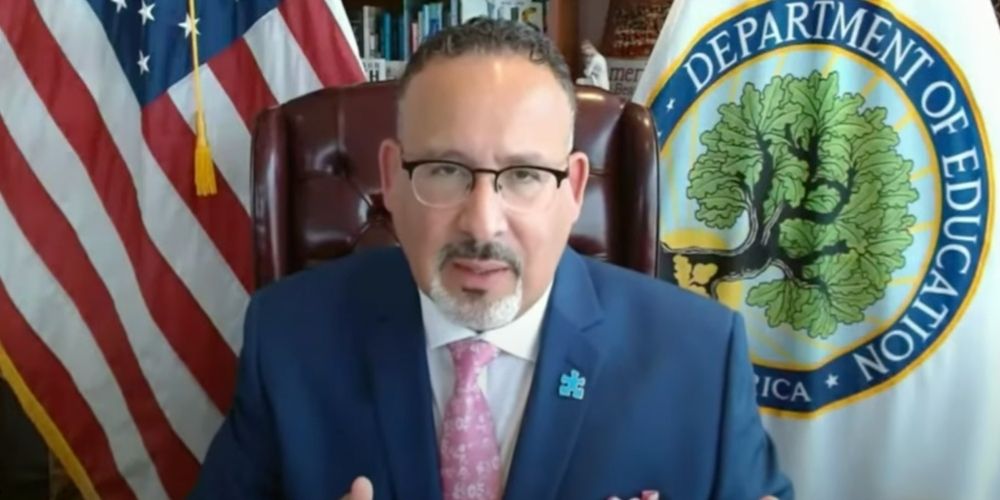 Recently published emails have revealed that Education Secretary Miguel Cardona requested the now-infamous letter from the National School Board Association that equated concerned and protesting parents to domestic terrorists.

The email exchange, obtained by the parents group Parents Defending Education via a Freedom of Information Act (FOIA) request, revealed that Cardona had been more involved with the creation of the letter than previously known by the public.

The NBSA letter suggested that the PATRIOT Act be used against parents as concerned mothers and fathers speak out at school board meetings across America on critical race theory in K-12 schools and COVID-19 mandates. The letter was used by the Biden administration's Department of Justice in creating a memo that directed the FBI to aid local education officials that felt unsafe over the protests.

In an email sent on October 5, NSBA Secretary-Treasurer Kristi Swett wrote that NSBA interim CEO Chip Slaven "told the officers he was writing a letter to provide information to the White House, from a request by Secretary Cardona."

"Should this allegation be true, it would reveal that this administration's pretextual war on parents came from the highest levels," PDE President Nicole Neily told Fox News. "Attorney General Merrick Garland unequivocally stated that he based his memo on the NSBA's letter - which in turn, mobilized the FBI and US Attorneys," Neily added. "If Secretary Cardona was truly involved in this ugly episode, it is a significant breach of public trust, and he should be held accountable."

It was revealed in November that the NSBA had collaborated with the Biden administration for "weeks" leading up to the sending of the letter to the President in the fall of 2021.

"In the September 14, 2021 meeting of the [NSBA Organization of State Association Executive Directors] liaison group, they were informed there had been a meeting with White House staff that morning and that NSBA was preparing to send a letter to the President, Subsequently, on September 17, 2021, the interim Executive Director emailed notice to the state association executive directors that indicated a letter requesting federal assistance would be sent," a memo to NSBA state association officers and executive directors stated.

This memo was sent to NSBA members on Oct. 11, but was dated Oct. 12, regarding the letter they sent to Biden on Sept. 29.

In an email sent to Fox News, it was revealed that Viola Garcia, the president of the NSBA and National Assessment Governing Board member, and NSBA executive Chip Slaven had discussed the issues with the White House "for weeks" and that they altered the text to satisfy White House staff.

"In talks over the last several weeks with White House staff, they requested additional information on some of the specific threats, so the letter also details many of the incidents that have been occurring," Slaven wrote in a Sept. 29 email to the NSBA board of directors.

Following the letter to Biden, the DOJ issued a memo directing law enforcement to investigate threats to school boards on Oct. 4. Following rampant backlash regarding the letter, the NSBA issued an apology on Oct. 22.

Rep. Jim Jordan told The Post Millennial in December that he had reason to believe that the letter from the school board to the president wasn't as simple as that, but was a much more coordinated undertaking.

"So all that happens in five days: 29th a letter sent, 1 days later Viola Garcia gets a position in the Department of Education, 3 days later they're already working on implementing what the letter suggests," Jordan said, noting that the conversations happened over a weekend, and that on Oct. 5, Garland sends his memo about taking action.

"When have you ever seen the government move that fast?" Jordan said.

"I think the Biden administration wanted to go after parents," he said. "They saw this effort to stop the critical race theory happening in our schools and they saw parents speak out" and wanted to "chill this, to stop conservatives and concerned parents from speaking."

"To that end, Jordan believes that the Biden administration was in league with the National School Boards Association to create a 'pretext' to do what they already knew they wanted to do: come down on parents," The Post Millennial previously reported.

"So I think it's because you gotta remember the pattern these guys have and this is frightening, frankly," Jordan said.