Police pointed out that the pair's actions "ultimately blocked traffic attempting to cross an international border." 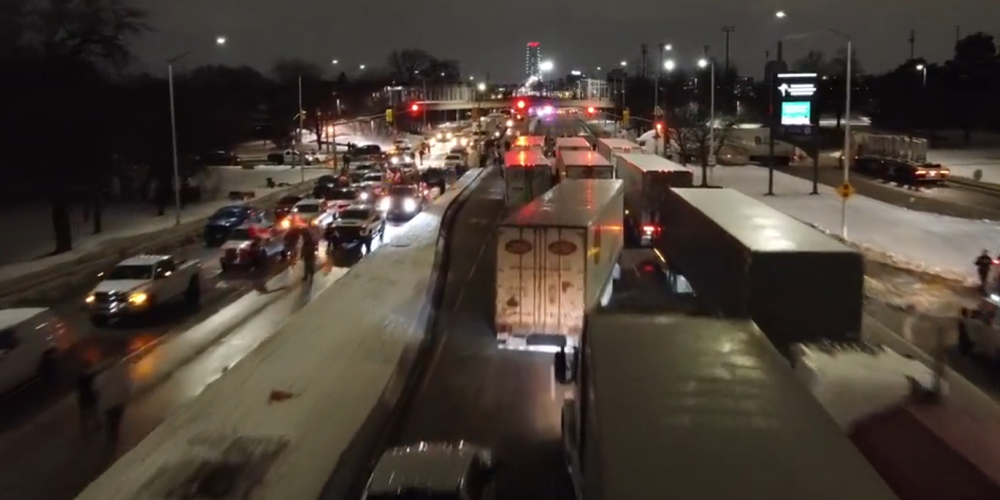 In February, members of the Freedom Convoy blockaded the Ambassador Bridge, essentially shutting down the international crossing between Windsor and Detroit.

Two people were recently charged for their involvement in the blockade as authorities continue their crackdown on those who participated in events across the country protesting the Trudeau Liberals' Covid policies.

According to the Windsor Police Service, 41-year-old William Laframboise and 42-year-old Nycole Dicredico were charged with mischief after they were identified as being among those blocking the road.

"On February 9, 2022," police said in a statement, "two vehicles were observed by police to be driven into the intersection at Huron Church Road and Tecumseh Road West, causing all access to northbound traffic to be blocked."

They pointed out that their actions "ultimately blocked traffic attempting to cross an international border."

Police noted that both Laframboise and Dicredico were "leaders/organizers" of events that took place during the Freedom Convoy proceedings.

Anyone with information is asked to contact the Windsor Police Service.

The Ambassador Bridge blockade began on February 7 and quickly grew to include hundreds of vehicles, mostly trucks, nationwide symbols of the protest.

Authorities attempted to disperse protestors, but they stood their ground and refused to leave until their demands were met.

On February 11, a judge ordered the blockade to be cleared, and gave those involved a short period of time to vacate. "You could be arrested if you are a party to the offence or assisting others in the direct or indirect commission of this offence," police warned.

Two days later, arrests began, and many people's vehicles were towed away.

A full week after the blockade began, the Ambassador Bridge was finally reopened, allowing traffic and commerce to resume.