Vishal Singh has also called for people to assault Latino videographer and host of TPUSA "Frontlines" for his video coverage of a public pride event in June. 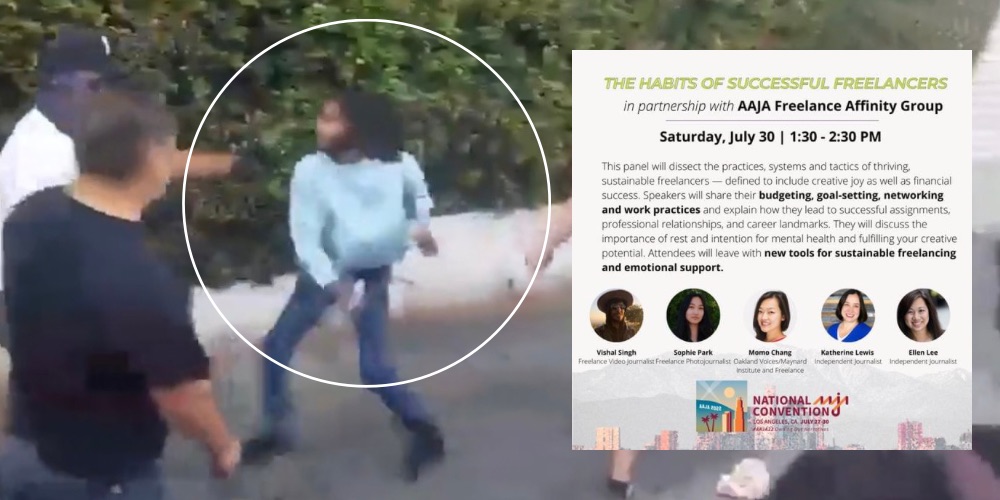 The Post Millennial editor-at-large Andy Ngo called out the Asian American Journalists Association on Tuesday for inviting a violent extremist to speak at an upcoming panel in Los Angeles, California.

The extremist in question is Vishal Singh, who according to Ngo, has been arrested on battery charges and frequently calls for violence against journalists.

Kalen was assaulted in the field while covering a riot, and Vishal Singh lied about D'Almeida being racist to justify the attack.

"Kalen is just mad because the last time he brought his racist, homophobic, transphobic ass to Los Angeles–he got laid the f*ck out like the bigoted sh*t stain that he is. This is not a safe space for hate. Don't get it twisted," Singh said on Twitter.

Vishal Singh has also called for people to assault Latino videographer and host of TPUSA "Frontlines" for his video coverage of a public pride event in June.

"If anyone sees this homophobic and transphobic weirdo at #LAPride following kids and filming them hanging out with loving LGBTQ+ people, throw him the f*ck out. Who spends the entire day filming children without consent and then accuses everyone ELSE of being a groomer or pedo?" Singh, who uses the pronouns they/he, said on Twitter.

In addition, Vishal Singh recently withheld information from the public regarding a horrific attack against an LAPD officer in June.

Singh tried to help suspect Michael Ortiz, who was filmed trying to burn an LAPD officer in the face with a makeshift flamethrower at a pro-abortion Antifa riot. Ortiz has been charged with attempted murder.

Vishal Singh will be speaking on a freelance journalist panel alongside Sophie Park, Momo Chang, Katherine Lewis, and Ellen Lee at an event on July 30.