WATCH: Lincoln and Roosevelt statues torn down by Antifa in Portland during 'Day of Rage' riot

Portland was subjected to an "Indigenous Day of Rage" which saw the toppling of statues of Abraham Lincoln, Teddy Roosevelt, and the vandalism of the Oregon Historical Society. 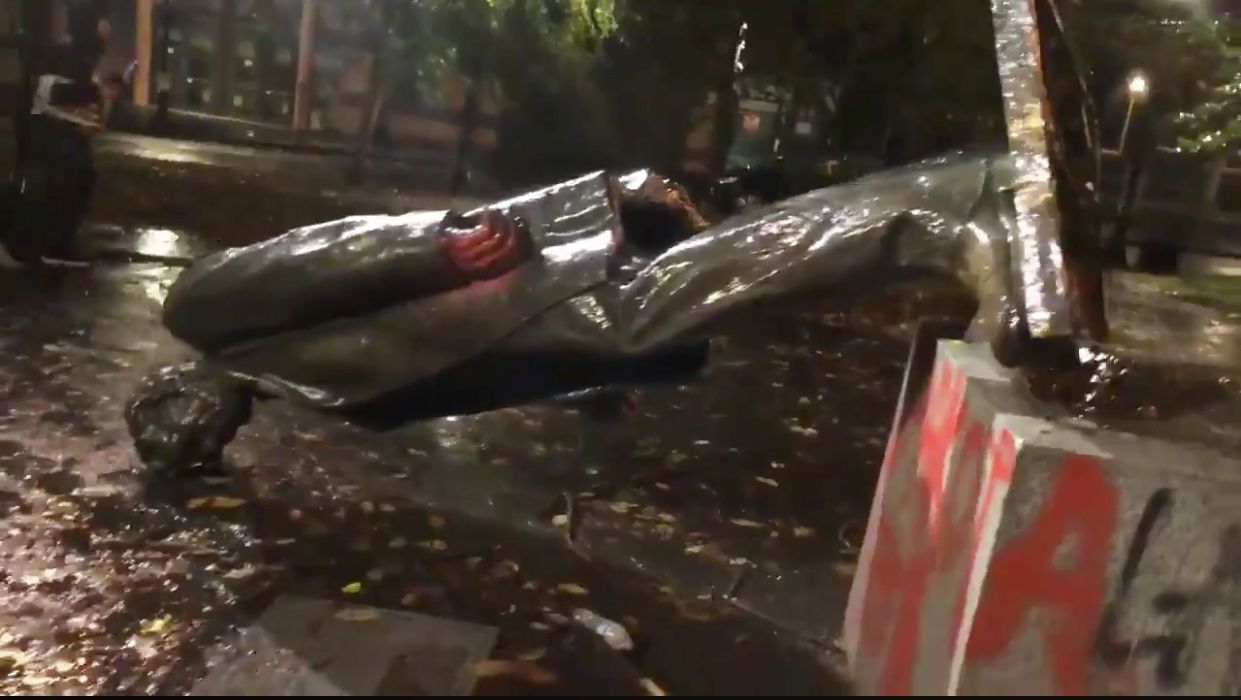 The city of Portland, Ore. was subjected on Sunday to an "Indigenous Day of Rage" which saw the toppling of statues of former presidents Abraham Lincoln, Teddy Roosevelt, and the vandalism of the Oregon Historical Society.

Lincoln was left toppled in the rain. Onlookers cheered as the statue of Teddy Roosevelt was pulled from its pedestal.

Protestors reportedly banned video recording of the destruction, though the aftermath was visible.

After Roosevelt was toppled, he was announced "deported." The videos, posted by Tracy Molina, were then deleted. She has been arrested seven times since May for violent protests, but the charges have been dropped in each case, according to Andy Ngo, The Post Millennial editor-at-large.

Molina shared images and video of herself at the toppled statues.

The protestor brings this back to rivers and pipelines. "Don't put LNG on Wet'suwet'en lands!" She then demands that drilling be stopped under a specific river, and though she "loves that river," she can't pronounce its native name. "They're drilling under it right now for an LNG pipeline up in British Columbia! I need you guys to support Wet'suwet'en!"

Canada saw protests against the pipeline and in support of the Wet'suwet'en earlier this year, with protestors stopping trains and setting up solidarity marches across the nation.

Photos from Portland show the destruction to both the Lincoln and Roosevelt statues. In defense of these acts of vandalism, a protestor claims that the reason behind it was the "climate crisis."

"We need to address the climate crisis, people. Indigenous people are hurting all over the world. Our salmon are hurting!" She said.

She calls on rivers to be undammed and pipelines to be stopped.

Lincoln's statue was further vandalized once it came down and was left on its head.

"The window has been shattered, but that's about it here. Lots and lots and lots of broken glass, but no damage to any of the exhibits... The damage to the park, with the statues being removed and damaged over there, and over here. This is not what Oregon is all about," Kerry Tymchuk, Executive Director of the Oregon Historical Society said.

Windows and glass doors of the Oregon Historical Society were smashed, and a flare was thrown inside.

The Indigenous Day of Rage was accompanied by instructions from Antifa to not allow the destruction and criminal acts to be filmed.

There was reportedly support among those present to not film what was happening.

Businesses were damaged in Portland as well, which has seen ongoing nightly protests since late May, after the death of Georg Floyd in police custody in Minneapolis.

The day of rage preceded what has become known as Indigenous People's Day, which used to be Columbus Day, and was linked to past conflicts between natives in the Pacific Northwest and settlers.