"The latest development is that the suspect in the Wi Spa incident, Darren Merager, is now a fugitive," Ngo explained. 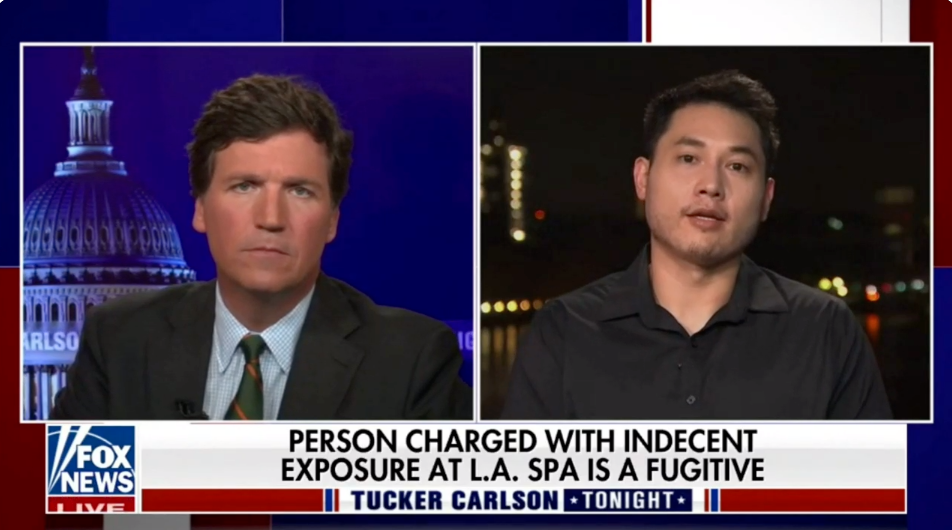 The Post Millennial's editor-at-large Andy Ngo joined Fox News' Tucker Carlson on Thursday to discuss the latest update on the Wi Spa indecent exposure scandal involving a biological male who identifies as transgender having allegedly exposed her erect penis to a young girl in the women's area of the spa in June.

Many in media falsely claimed that the incident was a "hoax" and perpetrated that claim through a series of "fact-checking" articles. However, Ngo uncovered the truth, which is that the alleged offender, Darren Agee Merager, was a registered sex offender with multiple prior charges.

"The latest development is that the suspect in the Wi Spa incident, Darren  Merager, is now a fugitive," Ngo explained. "Earlier this month, a judge in Los Angeles county issued a second arrest warrant because Merager missed her court date for another felony indecent exposure case that is open right now."

According to Ngo, Merager was involved in a separate incident back in 2018 where authorities indicate the transgender male exposed his semi-aroused genitalia to young girls in a West Hollywood locker room.

However, Merager claimed her innocence in a recent interview with Ngo and alleged that individuals are mistaking her "large appendage" for an erection.

Carlson quipped that "flashers" are now a "protected" group.

Andy Ngo is the best-selling author of Unmasked: Inside Antifa's Radical Plan to Destroy Democracy.