The Capitol officer suspected of having shot Babbit allegedly left a loaded handgun unattended in a public men's room inside the US Capitol in a previous incident. 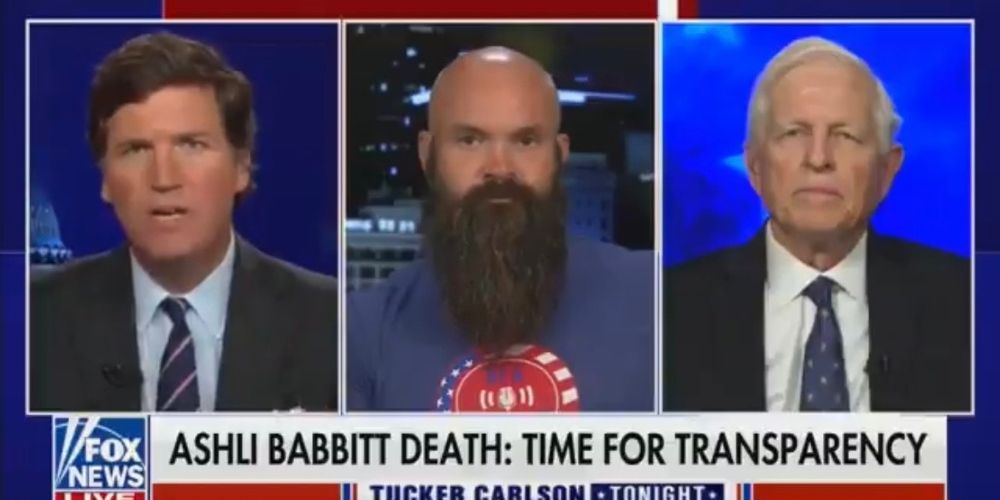 Tucker Carlson took aim at the going Democrat narrative behind the Capitol riot earlier this year. Both Democrats and mainstream media outlets have claimed that the riot that happened at the Capitol on Jan. 6 was a white supremacist, QAnon "insurrection." President Biden has gone so far as to say it was the "worst attack on our democracy since the Civil War."

As Carlson pointed out, and has done repeatedly in an effort to not let history be written in falsehoods, "The amazing thing is that that claim... was internalized not just by the population but by Republican leaders." This, Carlson said, has led to months of GOP lawmakers not asking the most basic, fundamental questions about what truly happened that day.

The only person who was killed during the riot was unarmed Trump supporter and former veteran of the US Armed Forces Ashli Babbit, who was shot and killed by a Capitol Police Officer. The identity of her killer is still unknown, and that person will not face criminal charges.

Ashli Babbit's husband Aaron Babbitt was joined by his attorney Terrell N. Roberts III to discuss their case to get to the bottom of Babbit's death at the hands of police officers.

Carlson asked Babbit who shot his wife. "Nobody's telling us," Babbit said, "and the silence is deafening." He said he "never expected to lose [his] wife to political violence," and that it "sickens" him to hear how people have spoken about his wife.

Calrson said that "we have a right to know who did it and why."

Roberts spoke to the recent reports that the officer who is suspected of having shot Babbit allegedly left a loaded handgun unattended in a men's room inside the US Capitol in a previous incident.

Tucker asked Babbitt’s attorney, Terrell N. Roberts III, if this could be why the Justice Department is refusing to disclose the officer’s identity.

"If it turns out that she was shot, for reasons that still haven't been explained to us," Carlson asked, "by a Capitol Police Officer who left a loaded handgun in a public men's room and kept his job somehow, do you think maybe that's why they are hiding his identity?"

"I don't know, but I think, one of the reasons why they're hiding his identity is they don't have a good explanation for this shooting," Roberts said. "I think that if Ashli Babbitt had been brandishing a firearm and she was shot, the officer would be identified by now and they'd be pinning a metal on them."

"So I don't think they have a good explanation for this shooting. And that's why they haven't identified them," Roberts added.

The primetime Fox News host asked Babbitt if he'd heard from any politicians who would help "find out who killed [his] wife."

"Congressman Darrell Issa did the night of the sixth," Babbit said, "and he was confused as to why he was calling me because he's not my Congressman. My business is in his district. I never heard from the congressmen that supposedly represents me here in San Diego," Babbitt said.

Tucker was appalled that no other elected officials took the time to reach out to Babbit's family and found the lack of humanity disturbing.

"An American citizen is dead," Tucker said. "It's not a small thing. And if we act like it's a small thing, then I think all of us are in trouble."

Air Force veteran and Trump supporter Ashli Babbitt was shot and killed by a police officer after breeching the Capitol in DC on Jan. 6. The family of Ashli Babbitt announced last week that they are suing Metropolitan Police Department in a $10 million lawsuit for the identity of the officer after the Justice Department determined it would not pursue criminal charges against the officer that shot and killed Babbitt.