"Our Prime Minister has expressed admiration for two different government systems in the world. One is Communist China, and the other is his dear friend, or perhaps more, the Castro's Cuba. And we're no longer the True North strong and free." 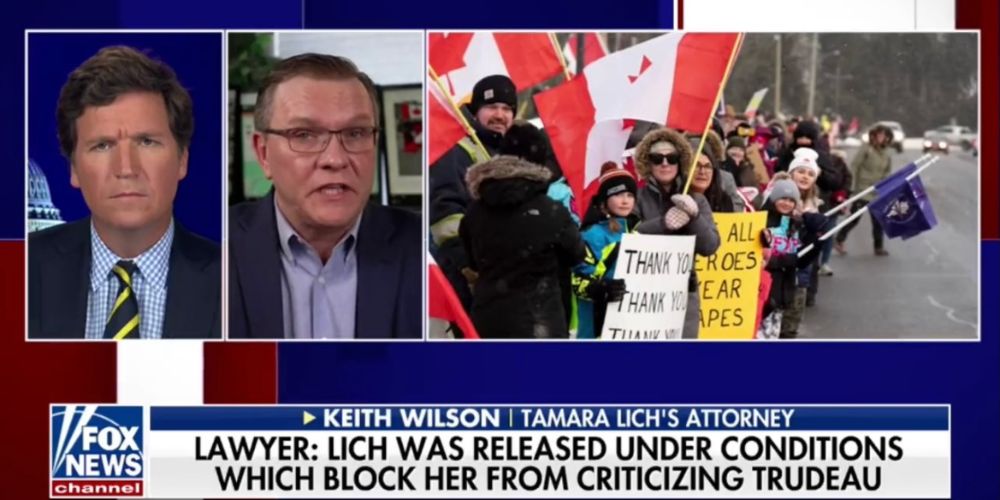 Wilson explained that Lich's arrest means that Canada is no longer a free country, as Prime Minister Justin Trudeau has weaponized the criminal justice system against those who oppose his policies.

"She committed the most minor crime that we have in our Criminal Code, Tucker. And it's called the crime of mischief. It's remarkable what's happened here," Wilson told Carlson.

"As you know well, our Prime Minister has expressed admiration for two different government systems in the world. One is Communist China, and the other is his dear friend, or perhaps more, the Castro's Cuba. And we're no longer the True North strong and free," Wilson insisted.

Wilson went on to explain in detail that Lich's arrest is "more than a human right's violation" but rather a deliberate attempt by Prime Minister Trudeau to "intimidate" Canadian citizens.

"Look what Tamara did. She inspired not only Canadians, 1000s of truckers, to drive to Ottawa to stand for their rights and stand against the authoritarian overreach from these COVID policies. But she also inspired protests around the world. And the prime minister I think wants to send a message to Canadians that if you dare challenge me and challenge my view of what living under my reign should look like, you will suffer consequences," Wilson told the Fox News host.

"She's a 49-year-old grandmother and mother. No criminal record. She spent 49 days in jail under ridiculous and troubling circumstances," Wilson explained.

Lich's attorney believes that Tamara's arrest has awakened individuals on all political aisles across Canada and believes that the nation could be headed towards a shift against Trudeau.

"To see this happen to see a nonviolent citizen with no criminal record spend time of jail, be rounded up by homicide detectives, paraded in chains and shackles, flown through airports across our country to go be put in a jail cell in Ottawa has really shaken a lot of people's sensibilities about how badly off-track things are up in Canada," Wilson told Carlson.

Tamara Lich was arrested in February for her involvement in organizing the Canadian Truckers Freedom Convoy and was held in jail for 18 days. Lich was arrested again on June 27 in Alberta and was ordered to appear in court in Ottawa. The Trudeau government alleges that Lich broke breached bail conditions.