WATCH: BLM terrorizes elderly citizens and assaults others in Pittsburgh

Members of Black Lives Matter (BLM) took to the streets of Pittsburgh on Saturday, harassing an elderly couple and assaulting a cyclist by bludgeoning them over the head with a skateboard. 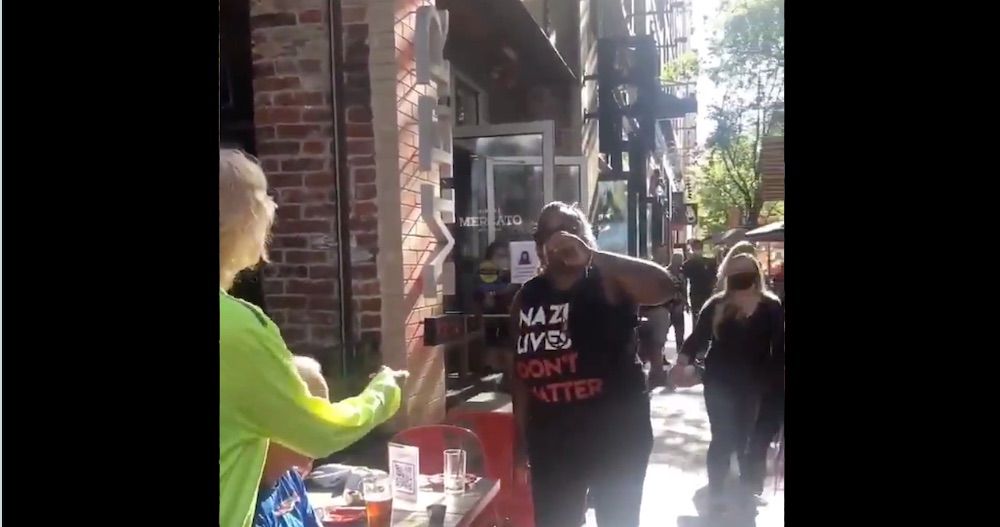 BLM activists took to the streets of Pittsburgh on Saturday, harassing an elderly couple and other diners, and assaulting a cyclist with a skateboard.

An anti-police march was reportedly scheduled for Pittsburgh on Saturday, which featured agitators marching through the streets, stopping to harass diners at an outdoor restaurant. They hurled obscenities at an elderly couple who were enjoying their meal.

A mob surrounded the couple, with one man flipping them off and yelling at them. A large woman with a "Nazi Lives Don't Matter" shirt shortly after approached the couple and took a glass off of the couple's table and drank it before smashing dishes to the ground.

The footage was widely shared on social media, with the parallels being noted between the BLM mob attacking restaurants in Pittsburgh, Washington, DC, and Rochester, NY. The sounds of smashing glasses and dishes can be heard over the shouting and drumming from the march.

A BLM demonstrator who had harassed the diners also screamed through a megaphone at a cyclist, who turned around to slap the megaphone out of his face. A third person standing behind the cyclist clobbered him over the head with a skateboard before chasing him farther down the street.

This kind of behavior is not unusual for BLM, who attacked restaurant patrons in Rochester, New York after renewed anger over the death of Daniel Prude—a man who died in March during a police-involved incident.

The BLM chapter also thought it would be a clever idea to incorporate a shield system, where those with the lightest skin would be on the frontlines in order to protect those with darker skin from police engagement.

An earlier report from The Post Millennial stated that "it is supposed that the idea behind this is either that the police will be less willing to attack white protestors during a riot, or that white people are more deserving of the full effects of the tear gas and impact weapons used by police once a riot has been declared."

BLM demonstrators in DC surrounded patrons of a restaurant at the end of August, raising their fists in solidarity for their movement, demanding that the woman join them in raising her fist. Though the woman refused, the mob continued yelling in her face, unwilling to leave her alone.

A similar incident happened just a few days later, where a mob aggressively used megaphones to disrupt a peaceful group of patrons sitting outside a restaurant to enjoy an evening meal. Demands were made by the mob for those at the restaurant to join their cause.