"At this moment in our history we must as ourselves 'can we do better? And what "can we do as a leading institution of naval service to promote antiracism policies in our admissions practices.'" 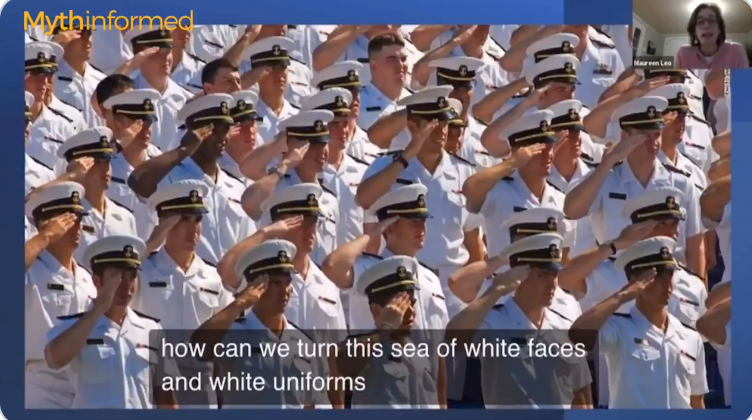 Boston University School of Law Associate Director Maureen Leo has proposed a policy in antiracism for the US Naval Academy.

Speaking on a Zoom call, Leo said that she was "discussing strengthening the Corps, promoting antiracist admissions practices at the United States Naval Academy by moving to a test optional admissions criteria."

At this moment in our history we must as ourselves 'can we do better? And what "can we do as a leading institution of naval service to promote antiracism policies in our admissions practices.'

"At this moment in history, our institution, like all institutions across the country, should be begging themselves of this question: How can we do it better?

"How can we turn this sea of white faces and white uniforms into something that looks more like this?" She asked, showing a photo of a group of Navy servicemen and women in uniform, and then a photo of black servicemen and women. Despite the photo which Leo seems to believe is dispositive, "African-Americans account for nearly 25% of all enlisted Army soldiers while making up just 13% of the population."

"We need to do better," Leo said, showing a slide of the proposed change, which acknowledges "the presence of systemic racism in our country" and states that "we are committed [to] an antiracist admission policy that supports and rewards academic excellent, leadership, and diversity."

Leo recommends pulling the standardized test scores from the admissions policy. This concept has been proposed across higher education, as educators and administrators realize that Asian students are admitted at higher rates due to disproportionately meeting rigorous admissions standards. Their solution to getting more non-Asians into their programs has been to remove or lower standards altogether.

Leo stated that the use of standardized test scores as part of admissions standards impacts students of color negatively.

In support of her new plan, she cited President Teddy Roosevelt saying "Do what you can, with what you have, where you are."

"The time now is to do that here," she said, "to move the United States Naval Academy from this sea of white," showing the photo of sailors in uniform again, "to what it can and has the promise of becoming.

The history of African Americans fighting in the US Armed Forces has long been a fraught one. African Americans enlisted to fight in World War 2 for the same reasons as other American young men, but also, PBS reports, to prove that they deserved greater rights at home. Their enlistment rate was high, as was their desire to serve on the front lines. However military leaders believed that African-Americans did not have the physical, mental or moral character to withstand warfare..."

"In the lead up to and during World War II the military establishment continued to maintain that African-Americans soldiers were not as capable as their white counterparts and needed more intensive leadership," note the History Detectives. But attitudes changed as military leaders realized their error.

"As the war progressed attitudes began to slowly change. Some African-Americans were trained in elite positions never offered previously, such as the Air Force, and some units were desegregated for the first time at the Battle of the Bulge. In just a few years the Navy, Marine Corps and Coast Guard made significant advancements in the treatment of their African-American personnel."

Leo and her colleagues would remove standards for entry to the US Navy because they feel that African Americans and people of color are not capable of meeting those standards.

It has recently been revealed that the culture of "wokeness" and the obsession with antiracism has infiltrated the US armed forces. Not only has the military issued advertising that is in line with critical race theory and undertaken diversity, equity, and inclusion policies, but Jack Posobiec revealed for Human Events that a Lt. Colonel has been telling troops that "If you're a white male, you are part of the problem."

The Post Millennial reached out for comment but has not heard back from Leo by the time of publication.