WATCH: Dinesh D'Souza says Peter Doocy is the 'one journalist who stands out in the White House press corps'

"Peter Doocy is the perfect gentleman. His questions are always well thought out. They are adversarial, but let's remember that it's the job of the press to be adversarial." 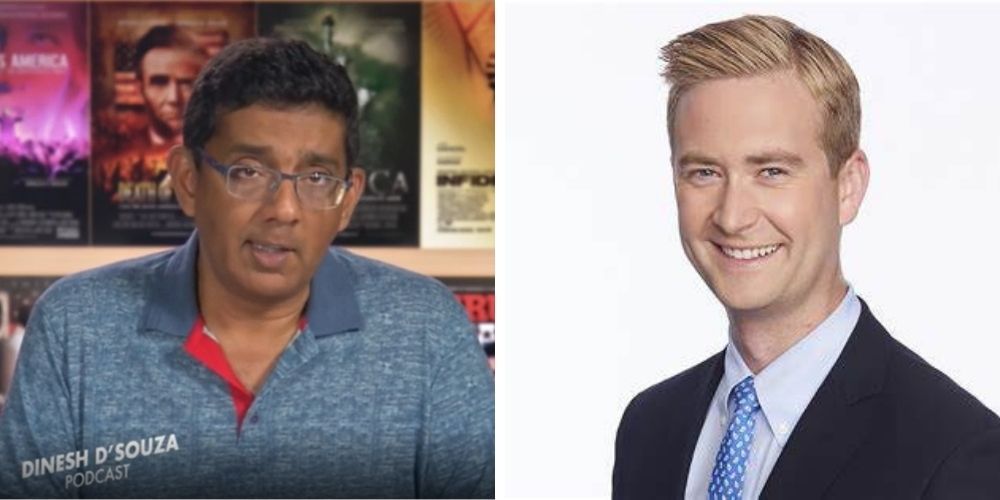 Dinesh D'Souza slammed the reporters of White House press corps for parroting talking points for the Biden administration rather than asking the tough questions and called it "an embarrassing spectacle." Except for Fox News' Peter Doocy."A CNN reporter... to Jen Psaki... 'how did you get so great?' How are you going to defeat those evil Republicans?' Now this is really not journaling. But there is one journalist who stands out in the White House press corps, and this is a Peter Doocy of Fox News."

"Now this is a young guy, he's 34 years old. He's actually the son of the Fox and Friends co-host Steve Doocy. One might think that in the Trump administration... the left wing press was ferociously adversarial. So no surprise now that Biden's in office, Peter Doocy representing Fox is going to be fiercely adversarial and shout, but no."

"Actually, Peter Doocy is the perfect gentleman. His questions are always well thought out. They are adversarial, but let's remember that it's the job of the press to be adversarial. I mean, why would you need a press? You would just need a public relations office, if you were asking questions that elicit the information the administration wants to put out. They don't need a press corps to do that."

"The function of journalism is to put intellectual and political pressure on the government to make it clarify and say things that perhaps it doesn't want to say or meet arguments that would rather not deal with. And this is really what Doocy does, and he does it in a very civil way."

"So let's look at the classic Doocy question. 'Why is it that the federal government is asking vaccinated Americans to wear masks to stop the spread of COVID-19, but at the same time, federal agents are releasing COVID-19 positive border crossers into small towns in Texas?"

"Boom. You want to fight the epidemic you're talking about going to emergency measures to do it, and yet you're letting in all these untested COVID positive people into the country. What possible sense can that make?"

"So interestingly, the left doesn't like this kind of thing.... and so they blast Fox News. 'Oh, Jen Psaki really owned Doocy,' but it's not a matter of owning Doocy, it's a matter that Jen Psaki is being pressed by Doocy to answer questions that nobody else really asks."

"When Gwen Berry, for example, the athletes said, 'oh, I wish that I can win a medal because I'm going to defile the American flag on the podium,' just doing this in the name of the woke left. So here's Pete Doocy now asking Jen Psaki, 'she turned her back while the Anthem... does President Biden think that is the appropriate behavior for someone who hopes to represent team USA?"

"Jen Psaki's response actually is not bad. She kind of does a little bit of a Jen Psaki pirouette, 'Well, I haven't spoken to the President specifically about this.' This is kind of our standard response. When, when a Biden is brought up, then she goes, 'Well, I know he's incredibly proud to be an American. He's got great respect for the Anthem.' And then she says, and this is kind of her so-called owning of Pete Doocy, 'He would also say, of course,' meaning she says Biden would say, she's actually putting words in his mouth."

"Biden doesn't save very much...but lots of people are playing ventriloquist with Biden. 'He would say, of course, that part of that pride in our country means recognizing there are moments when we, as a country, haven't lived up to our highest ideals. No one would disagree with this.' And it's a perfectly appropriate response from Jen Psaki."

"My point he is not to blast Jen Psaki, it's to say that asking these kinds of questions and getting the White House to respond is the essence of what journalism is. And isn't it a pity that with this full room of the White house press corps right now, in terms of real journalism, there's only one guy doing it."