"There was no political reason to do it. And what they should be doing is actually letting the Biden ship sink. So the Republicans can post a victory in the midterms next year," D'Souza added. 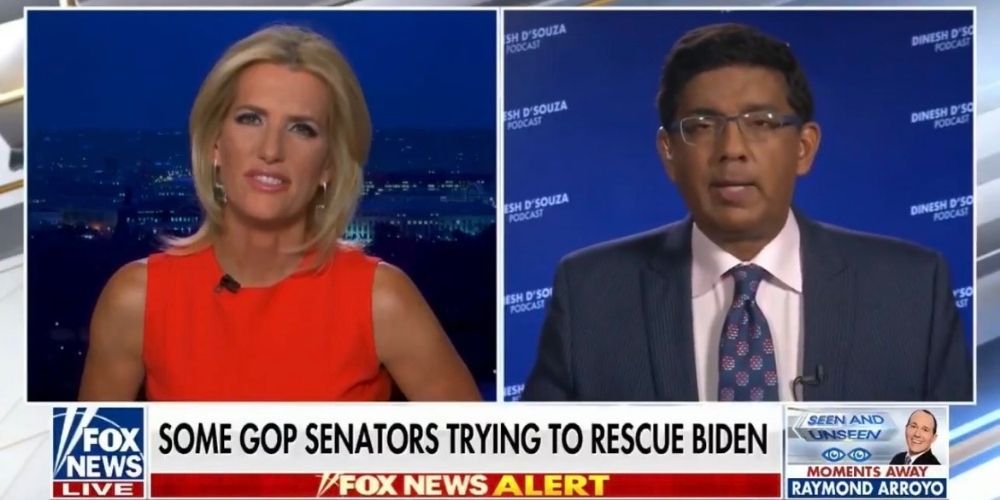 Conservative commentator, author, and filmmaker Dinesh D'Souza joined Fox News' Laura Ingraham on Monday to slam Republicans in Congress for working alongside the Biden administration to pass the massive, $3.5 trillion Infrastructure Bill while Democrats have a record of refusing to work alongside their political opponents.

"Republicans have a completely different psychology than Democrats, Republicans are literally trying to keep the Biden ship afloat. They feel it's their responsibility to prevent it from kind of tipping over. Now, there are no Democrats who really behave like this," D'Souza said.

"There was no political reason to do it. And what they should be doing is actually letting the Biden ship sink. So the Republicans can post a victory in the midterms next year," D'Souza added.

"The way the Democrats operate, they will convert a small victory into a bigger victory. It will give them the kind of momentum they say, okay, well, we got the first thing done but now we need to get to second base and the third base and finally to the home run. So Republicans need to do block and tackle."

"Biden has a narrow window. It's about a year before the midterms kind of kick in seriously and so everything that we can do to block and tackle them in the meantime, that's obviously the smart play for Republicans," D'Souza said. "But it's not the smart play for these guys because in some ways they're the useful idiots."

The host of the Dinesh D'Souza podcast went on to slam Speaker of the House Nancy Pelosi (D-CA) for extending proxy-voting (voting from home) instead of at legislative sessions, said Democrats have no respect for long established democratic processes.

"Democrats all across the board have sort of no respect here for democratic processes that have been long established. They're perfectly willing to use those processes when they come to their benefit. But the moment the political tables turn, you see this with the filibuster, you see this in so many other issues, the rules are really not really rules for them. They're merely opportunities when it's one way and then there are obstacles when it's the other way," D'Souza said.

"So this is a party that's completely without principle. And for us to debate them as if we're debating the merits of the filibuster or the merits of the proxy role, they would flip on those issues completely if the roles were reversed," D'Souza said on Monday to Fox News' Laura Ingraham.