The altercation took place as Hochul could be heard shouting in the background, "You can deny an election like those individuals! And we say 'hell no!'" 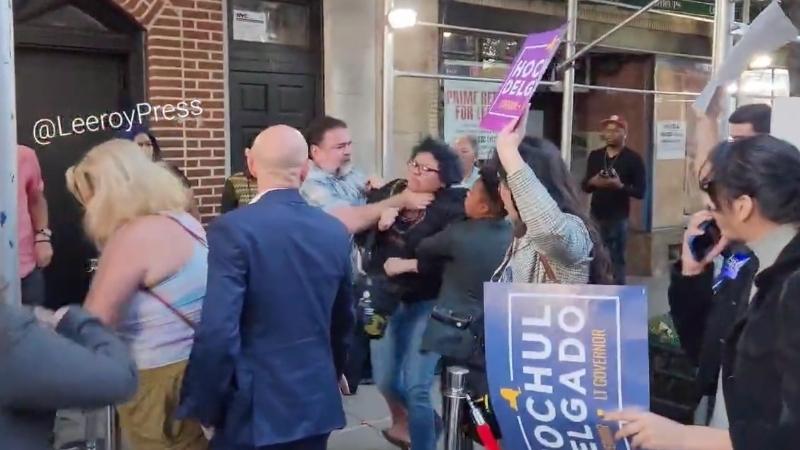 Olivia Rondeau
Nov 6, 2022 minute read
ADVERTISEMENT
ADVERTISEMENT
A female supporter of New York Republican gubernatorial candidate Lee Zeldin was choked by a man in Gov. Kathy Hochul's camp at a Saturday campaign rally for the current unelected Democrat governor. The man was not arrested for the assault, according to a local journalist.

Independent journalist Leeroy Johnson was outside of the Stonewall Inn in New York City watching the events of the Hochul rally and counterprotest unfold when he witnessed a man "choking the female Zeldin supporters" after an altercation broke out between the two sides.

The altercation took place as Hochul could be heard shouting in the background, seemingly at the counter-protesters.

The crowd chanted back "Hell no!" several times.

According to Johnson, it's "unclear what happened before this," but the woman received medical treatment.

Hochul is in a surprisingly-tight race with Zeldin, a Republican congressman representing the state's first congressional district. New York hasn't had a Republican in gubernatorial office since 2006.

A new poll released by The Trafalgar Group has revealed that Zeldin has edged out Hochul, with just days before the election.

The poll, conducted between October 27 and 31 of 1198 likely general election voters, found that 48.9 percent of voters would vote for Zeldin if the election was held at that moment, while 47.6 percent said they would vote for Kathy Hochul. The poll has a margin of error of 2.9 percent.

That same day, while delivering remarks in Joliet, Illinois on Saturday, Joe Biden referred to a gathering of protestors outside as "idiots" because they were carrying signs that read "Socialism Sucks" and "Vote Pro-Life."