WATCH: MTG tells Bannon 'They are trying to have me murdered' after swatting attempts

"I'm trying to protect children from the Left's perverted and evil ideology that is trying to maim and mutilate children. It's child abuse. It is sexual child abuse," MTG said. 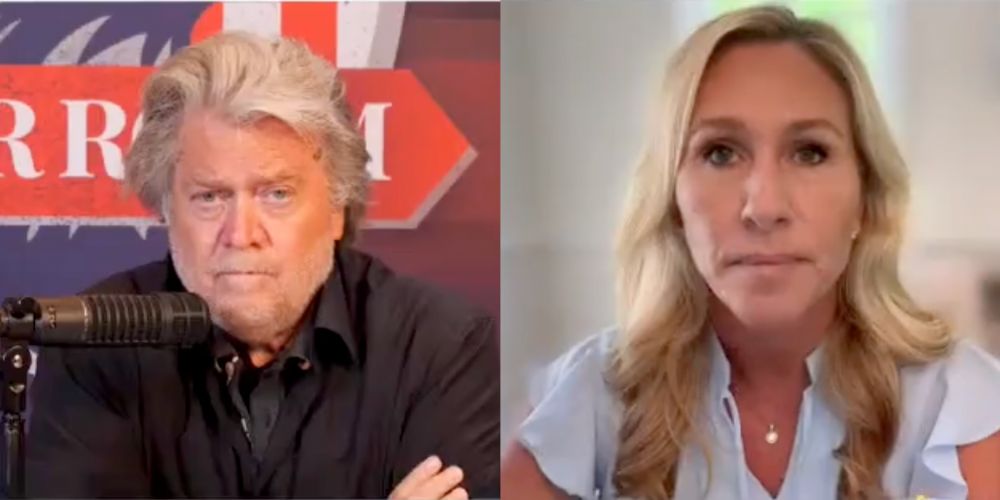 On Thursday's episode of War Room, host Steve Bannon spoke with Georgia Congresswoman Marjorie Taylor Greene mere hours after she was swatted for a second night in a row.

The Congresswoman explained she is certain that the effort to have her killed springs from the same "sick ideology" that also seeks to mutilate children and they targeted her because, "I'm trying to protect children from the Left's perverted and evil ideology that is trying to maim and mutilate children. It's child abuse. It is sexual child abuse."

The Georgia congresswoman explained how the Left's embrace of radical gender ideology has pushed for the societal normalization of "medications, hormones, puberty blockers to transform their bodies, mutilate their own bodies, before they're even 18 years old; before they can vote, before they can join the military, before they can take out a student loan."

Earlier in August, Greene introduced the Protect Children's Innocence Act, a new bill that would criminalize the medicalized gender transition of minors. The legislation would outright ban and prohibit all so-called "gender affirmative" care for minors in the US and offer civil protections to any minor upon whom these procedures were done.

In response to the legislation and MTG's defense of children, many establishment media outlets deployed both strawman arguments and ad hominem attacks to discredit the Congresswoman.

MSNBC on August 22 wrote the headline, "Marjorie Taylor Greene officially declares war on the trans community" with the deck, "If Republicans seize control of Congress, trans-affirming care for kids and adults is at stake."

Concerning the articles saying Greene has "declared war on trans kids," Bannon asked her what she thought, to which she replied, "Those media companies, they're responsible for trying to get me killed by those horrific headlines."

Establishment media, especially NBC and MSNBC have written incendiary headlines about the Congresswoman throughout her tenure.

"But the disgusting Left, MSNBC and NBC, putting headlines up there that I'm targeting trans kids. That is the biggest lie," the Congresswoman said. "I'm saying leave these kids alone. Let them be children. Let them be innocent. Let them grow up. And when they become adults, they can choose to do anything they want to do because we're adults."

"The liars in the media are the biggest enemy," Greene warned.

The outsized reaction to Greene's desire to protect the innocence of children incited the two day swatting scenario. But Greene is not "intimidated" or going to "back down."

"I'm not even scared of the Left at this point. I don't care what they do," she said while noting that the police can come and hang out and have a party next time the Left attempts to swat her.

Swatting is a criminal harassment tactic of deceiving emergency services into sending a typically armed response team to another person's address. Authorities have yet to discover the culprits behind the two incidents.