In his response, Poilievre not only cleared the record on those claims, but turned the tables, highlighting all the times Trudeau failed to condemn misogyny in his own party. 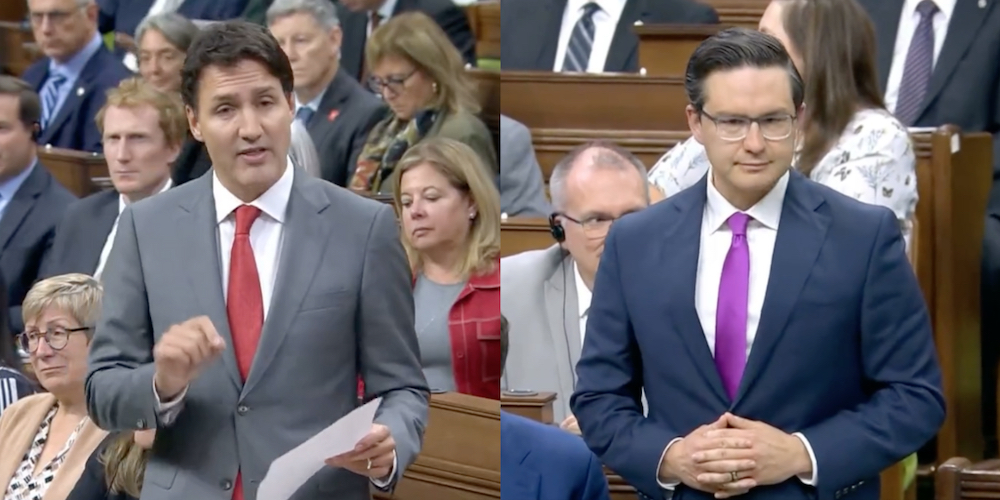 In his response, Poilievre not only cleared the record on those claims, but turned the tables, highlighting all the times Trudeau failed to condemn misogyny in his own party.

According to Global News, the hashtag #mgtow, men going their own way, had been inserted into the metadata of Poilievre’s YouTube videos going back to 2018. The movement is essentially anti-woman, and has devolved into forms of “male supremacy.”

Upon being informed that it was there, Poilievre’s team scrubbed it from their content, and began an investigation, however it proved next to impossible to discover who had put it there.

Poilievre “confirmed with current staff who were working with his office in 2018 that they did not add the tag,” spokesperson Anthony Koch said, adding that the Conservative leader “condemns the group in question along with all misogyny.”

Despite the removal of the tag and condemnation of misogyny, Trudeau pressed Poilievre on the issue.

“If it were not for Global News,” Trudeau began, “we would not have learned that the Conservative leader has been purposefully using his videos to appeal to far-right, misogynistic online movements.”

“These are anti-women movements, and they have had devastating real life consequences,” he added, calling on Poilievre to “take responsibility and apologize.”

“I condemned this organization, and I corrected the problem as soon as it became known to me,” Poilievre said, “but I condemn all forms of misogyny, including when the prime minister fired the very first female Indigenous attorney general.”

Poilievre went on to read from a laundry list of all the times Trudeau had been accused of misogyny, throwing in for good measure the prime minister’s history of “dressing up in racist costumes.”

In his response, Trudeau continued to insinuate that Poilievre had deliberately reached out to anti-women, misogynist groups “for his own political gain,” suggesting that Canadian women wanted answers.

Poilievre reiterated that he had corrected the issue, and once again turned the tables on Trudeau.

“The prime minister does not take responsibility for the extremism that he has funded,” he said, pointing out that Trudeau had given money to Laith Marouf, a “vicious anti-semite” who “spread hatred online with taxpayers’ dollars.”

Poilievre also noted that Trudeau “drove many women of his own caucus out of the party and out of parliament altogether with his mistreatment of them.”

“We condemn all that behaviour; we condemn misogyny always and everywhere, and we ask the prime minister to finally do the same.”