On Monday, former Congresswoman and recent Democratic Party defector Tulsi Gabbard warned that so long as Democrats and the Washington elite continue to work with big tech, there can be no democracy. 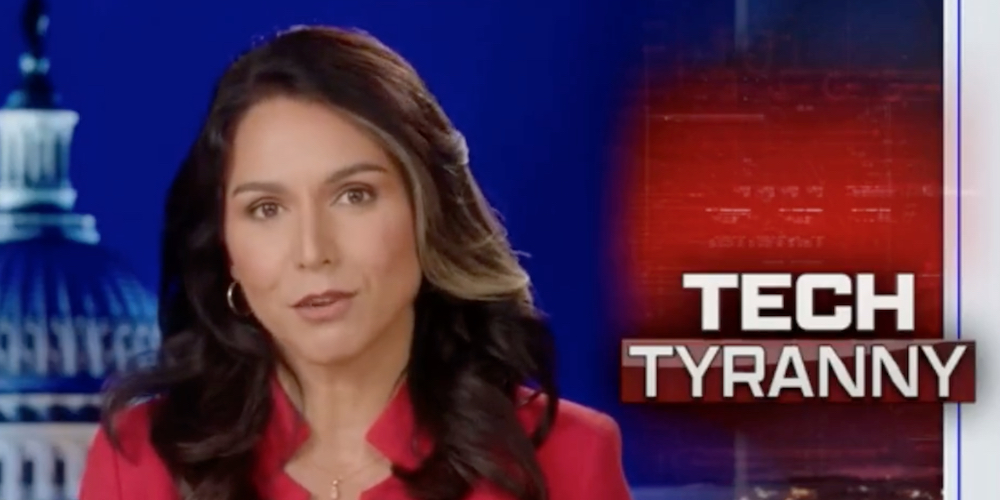 On Monday, former Congresswoman and recent Democratic Party defector Tulsi Gabbard filled in for Fox News host Tucker Carlson and warned that so long as Democrats and the Washington elite continue to work with big tech, there can be no democracy.

Her comments come less than a week after the midterm elections, with Republicans poised to take the House as Democrats retain a narrow control of the Senate.

"We've spent all week hearing nothing but pundits pontificating on what actually happened in this election," Gabbard began, "but if you're like me, you've had enough of that."

She went on to slam President Biden for using his platform in Bali to vilify millions of Americans instead of delivering a "necessary message of unity."

"There were no candidates this cycle that were in favor of political violence, or voter intimidation, or destroying democracy," Gabbard said in response, suggesting that Biden's message was "the wrong approach."

"Here's the truth," she explained. "So long as the Democratic Party and the permanent Washington elite are working hand-in-hand with Google and Facebook, and so long as Google's allowed to continue to use its monopoly power to skew public opinion in a certain direction, literally manipulating the information that we as voters are allowed to see, then there is no democracy.

Gabbard went on to cite a study from North Carolina State University which discovered that Gmail sent the majority of emails from right-wing candidates to the spam folder while keeping those from left-wing candidates in the main inbox. She also slammed the tech giant for allegedly reducing the visibility of conservative websites in its search results.

According to a study published by the National Academy of Sciences, what people see in their search results can influence their decisions at the polls by up to 20 percent.

Gabbard concluded by calling on those screaming about saving our elections to actually "do something about it" by tackling the problems that stand in the way of true democracy.