Despite the fatal weekend in Chicago including the viral Puerto Rican Day Parade attack that left two gun shot victims dead, Mayor Lori Lightfoot said that the city is experiencing "a downward trend" in both homicides and shootings. 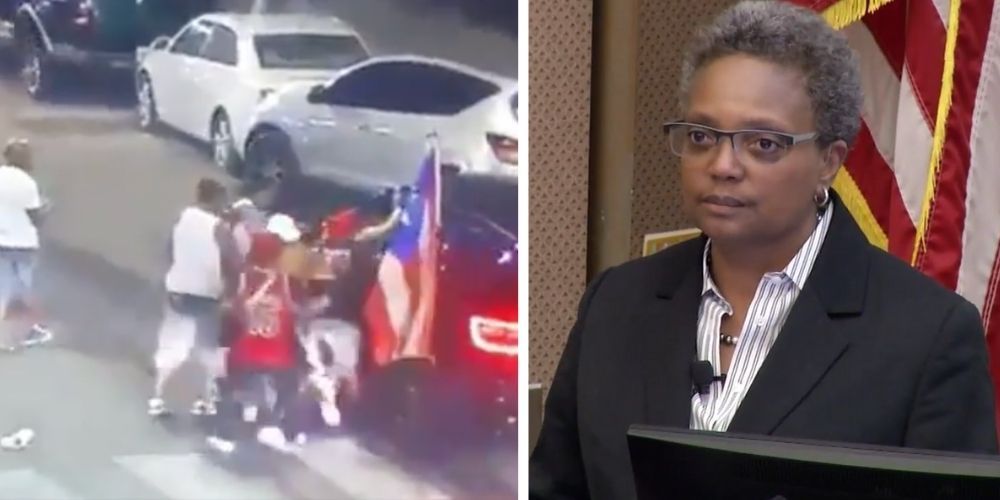 Despite the fatal weekend in Chicago including the viral Puerto Rican Day Parade attack that left two gun shot victims dead, Mayor Lori Lightfoot said that the city is experiencing "a downward trend" in both homicides and shootings.

In just over 48 hours, 65 residents in Chicago were shot, 10 were killed, and one woman was stabbed to death, according to WGN-TV.

Amidst the several dozen incident to occur over the weekend, the most shocking came on Saturday night in Humboldt Park. The fatal shooting was aired on Facebook Live. A video of the attack shows a couple being pulled out of their vehicle by a group of people, before one shoots at the two of them. The couple was coming from the Puerto Rican People's Day Parade in Chicago.

The man, 24-year-old Gyovanni Arzuaga, was shot in the head, and was pronounced dead at AMITA Health Saints Mary and Elizabeth Medical Center.

25-year-old Yasmin Perez, a mother of two children who was underneath Arzuaga, was shot in the neck and rushed to Stroger Hospital in critical condition.

On Tuesday morning, Perez, was pronounced dead by the Cook County medical examiner's office, according to the Chicago Sun Times.

"But as you saw from that horrific video, it wasn’t just one person. There's one person who dealt the fatal shot but there were others who were standing by, who dragged that poor woman out of the car, the man who was killed literally used his body as a shield and he paid for that with his life," Lightfoot said. "The fact that happened in our city and so many individuals stood around and seemingly were trying to take advantage of this moment that I believe started with a car accident is a horrific statement, it’s a horrific statement about those men who were involved in that."

Just last week, Lightfoot pleaded for help from the Biden administration due to rising acts of violence in her city.

Chicago Police Superintendent David Brown stated that police this year have recovered 5,546 guns, with 172 guns being recovered over the weekend.

"Every gun recovered by a Chicago police officer is a deadly force encounter. Also, every gun recovered has a potential to reduce violence from firearms," said Brown. "With our whole of government approach we’re actually starting to bend the curve of violence in the city but for those sensational incidents."

One Humboldt Park resident, who asked not to be identified, told ABC 7 that she's fearful for her family living in the city.

According to WGN, a problem facing Chicago police is a dwindling police force. Data shows that more officers have left the force this year than in all of 2018.