"Now that they've been told they will not be criminally charged, will you apologize?" 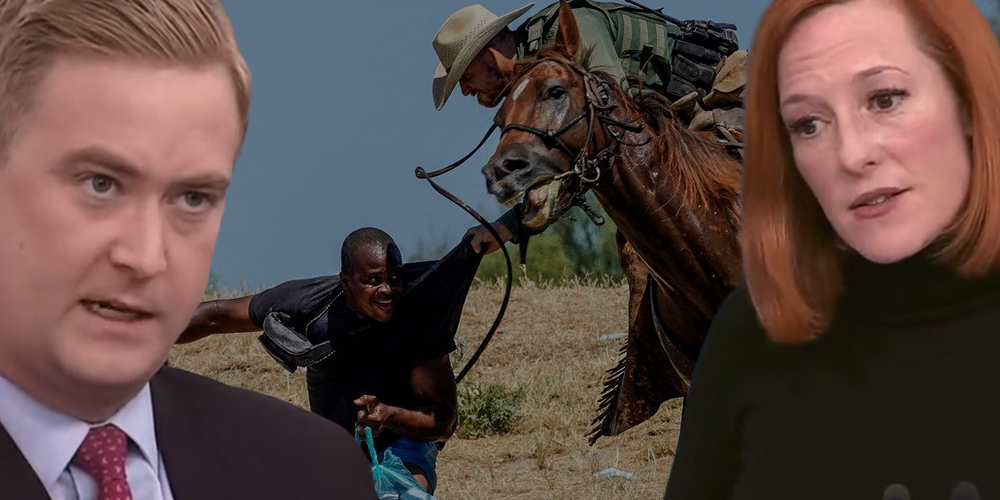 The report is expected to be published soon. In the meantime, the press secretary is using that to deflect from having to apologize.

"We've been told that the mounted Border Patrol officers the president accused of whipping migrants have been notified, they will not face criminal charges. So when is the president going to apologize to them?" the Fox News reporter asked.

Psaki's response was leaving it up to the DHS: "There is a process and an investigation that's gone to the Department of Homeland Security. I don't have any update on that."

Sources spoke to Breitbart Texas last Thursday and confirmed that DHS cleared border agents of any wrongdoing amid a surge of thousands of Haitian migrants who camped out under a bridge in Del Rio, Texas.

Doocy reiterated that Biden accused Border Patrol agents of the criminal offense of whipping. Psaki again stood by her reply that it was up to the DHS to formally reveal their final conclusions on the matter.

The Fox News reporter decided to change his tactics to try and break the discussion's stalemate. Doocy called Psaki herself out, instead. "You accused these officers of brutal and inappropriate measures. Now that they've been told they will not be criminally charged, will you apologize?" he questioned

The press secretary repeated herself a third time about it being up to the DHS to announce updates on the investigation. But what Doocy was referring to was how herself, Vice President Kamala Harris, and DHS Secretary Alejandro Mayorkas initially assumed the "horse whipping" migrants claim was true, and condemned the staff doing their jobs in Del Rio, Texas.

The Biden White House went as far as banning horses in the Del Rio area of the US - Mexico border, in response to what was first claimed to have happened. For a time it made the rounds on social media as leftists claimed it was a case of racism, whereas sources speaking to the likes of Townhall.com's Julio Rosas said no migrants were struck by horse reins.

Eventually, establishment outlets like The New York Times had to admit that the "horse whip" scandal didn't happen. Their forfeit came after the photographer behind the viral images said he never saw border agents "whip anyone with the thing."

Despite those directly involved at the scene speaking out about the falsehood, Rep. Maxine Waters advertised the horse whip rumor as true when proclaiming it "worse than what we witnessed in slavery."